From the Archives: Instruction Manual for American Soldiers

- August 16, 2012
I have a plethora of research that I've accumulated over the years which I'd love to share. It's just sitting there anyway. Someday soon I'd like to make something of it in the form of a few published papers or articles, but in the meantime my blog forum will have to do. So, occasionally I'll be posting things "from the archives" which will be interesting tidbits of history that I've uncovered through my research. 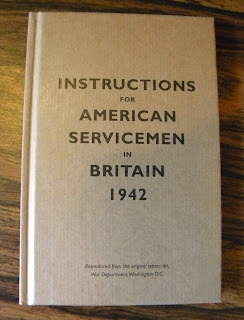 I saw this book at the Bodleian Library giftshop at the University of Oxford in England when I was on a study abroad to London. I didn't buy it though.

And I kept thinking about it. Regretting that I hadn't bought it.

Then, merely a week before we were due to fly home I used my last remaining train pass punches to take the train from London to Oxford just to buy this book. It may seem silly, but to me as a historian who is fascinated with American/British relations during WWII it was a must!

Instructions for American Servicemen in Britain 1942 was a book written by the U.S. government and given to American soldiers who were going overseas to Britain during World War II. The book was to introduce them to the British culture as a way of hopefully reducing cultural clashes and misunderstandings. It quickly became a very popular book among the British themselves, mainly because it was a unique, straightforward account of the way outsiders viewed the British; which is what makes it so amusing to read today!

Besides helpful advice, the book explained British weights and measures, British currency, and important do's and don'ts like "NEVER criticize the King or Queen."

This little book is filled with treasures, but below are a few of my favorites: 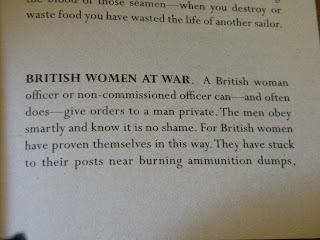