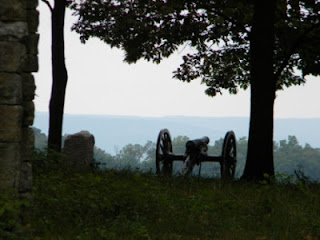 Last Saturday I was able to take a trip up to Gettysburg on my own - as in all by myself! I wanted to have a leisurely stroll around Gettysburg, endless wandering through the fabric shops, and to have a nice quiet lunch.

Well, when I drove into town there were Civil War reenactors everywhere! I really had no idea why, but the town was swarming with them. I got to the fabric shop (Needle & Thread) and I finally asked a costumed reenactor what the event was. It turns out that the third weekend in November is Remembrance Day! It was the 149th anniversary of the Gettysburg Address! I felt so stupid. And then I felt panic, because they were going to block off the main street for the parade and how was I going to get back home? The woman suggested I stay for the parade. I called my husband to let him know of my predicament, and he encouraged me to stay and enjoy myself, so I took their advice, found a parking spot in town, and walked around.

I had lunch at the Farnsworth House (delicious!), went to the Abraham's Lady shop and then watched the parade. I was amused to see not just one, but two Abraham Lincolns in the parade, one looking more true-to-life than the other. I was also standing near a group of elderly Confederate reenactors who tipped their hats to all the ladies in the parade, stood at attention for every flag (Union and regimental), and shouted hello to "Mr. Lincoln". It was quite amusing! It was also quite cold, so I was glad to eventually get back to my car, and head back to the fabric shop to look around some more.

I felt pretty silly not remembering Remembrance Day, but felt even worse when the next day a friend of mine told me that Steven Spielberg had been there to give the keynote speech in honor of his new movie "Lincoln"! Dang it!

Ah well. Next year is the big 150th anyway. I'll have to make it up for that and bring my family. Watching a parade by yourself is pretty lonely. So much for my alone time!