From the Archives: Victory Cookbook: Nostalgic Food and Facts from 1940-1954 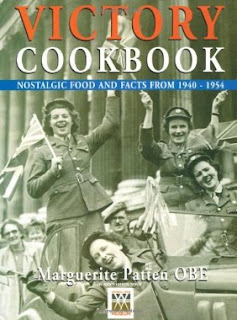 I am absolutely in love with this book by Marguerite Patten! I was getting a few books from my wishlist a few weeks back and this was one of them. It sat on my shelf awhile until I finally picked it up over the weekend. It is totally awesome! I love Margurite Patten and wish I could sit down with her for tea sometime and chat about food rationing in Britain during WWII. Since that's probably not going to happen, this book is the next best thing! It's actually three of her books in one: The Victory Cookbook, We'll Eat Again, and  Post-War Kitchen and it has her commentary sprinkled throughout.

What I love the most is that she explains how there was different terminology back then and the recipes have been updated to show the most recent lingo on measurements and oven temps. This makes it much easier for even Americans to use today - she puts in the Fahrenheit degrees! Yippee! Most of the ingredients are measured by weight, so if you have a kitchen scale, that shouldn't be too big a deal.

I also really like that in the Post-War Kitchen section she talks about how rationing in Britain went on well into the 1950s - a fact that I knew very little about. Fascinating stuff!

There are dozens of recipes that I want to try, especially because they are low on sugar and use pantry friendly things like egg powder and powdered milk which I actually have! I was wondering how I would get ahold of particularly British things like golden syrup and caster sugar, but I was shopping today and the store I like to go to has a small British section with... golden syrup and caster sugar!! I couldn't believe it. They weren't particularly cheap, but for the sake of experimentation I got them both. And just so you know - caster sugar is granulated, but a lot finer than our regular sugar, so that would make a difference in your baking. Huh! The golden syrup is just sugar cane syrup. I wonder if I melted down some turbinado sugar with water (or other sugar that still has some of its natural molasses) if it would make a passable golden syrup... I guess I'll just have to try some out and see.

I'll have to let you know when I try any of the recipes.

And here's a page from the book:

cookbooks From the Archives rationing WWII