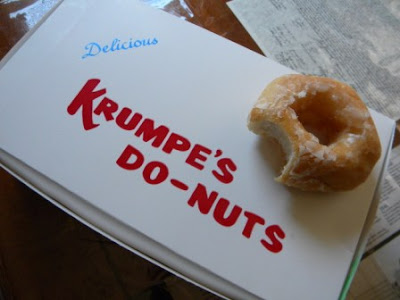 Last night I went out with my friend Amber to Hagerstown, MD. We were on a trip to Wonder Book, an amazing used bookstore with used and antique books alike for awesome prices. It's so nice to have a kindred spirit of old and used books! I found some pretty sweet stuff!

Our second destination in Hagerstown was what my friend said is an old establishment all the locals go to: Krumpe's Do-Nuts. She had been raving about how absolutely amazing these donuts were - she claimed that Krispy Kreme and Dunkin' Donuts has nothing on these guys - so of course I had to check it out. This donut shop has a pretty interesting history- going back to the World Wars and a German sailor whose ship sank in the Chesapeake just outside Baltimore and was one of a few survivors. Lucky for him... and lucky us!

The shop was on a dark back street near downtown Hagerstown, appropriately named "DoNut Alley" - spelled with the capital N. The unique thing about this shop is that it's open all night making the donuts for its delivery routes in the morning, but they have a few narrow hours that it sells to the public - and it's only open at night. Amber said that if you get there right when it opens at 7 pm (9 pm in the summer), there's always a line out the door. Luckily, we got there an hour after opening, so it wasn't nearly as busy and we made it in the door before more people came and were lining up outside.

The great thing about these donuts is that they are small and the selection is simple: cream filled, fruit filled, bavarian, chocolate cake, and glazed. No superfluously monster-sized dunkers here. And I think that's how it should be. Delectable things should come small and easy to savor. And these donuts fit the bill nicely. I couldn't decide what to get, so I got a dozen for my family and I to sample their array.

Well, Amber and I got back to the car and I pulled out a warm, insanely fresh glazed donut and sunk my teeth in. It was still stretchy, it was so fresh. It was absolutely heavenly! Warm, chewy, smooth dough, sweet, flaky glaze - but it wasn't too sweet. The whole thing wasn't just eating a donut. It was an experience.

And then I sat in debate. We hadn't left yet and I only had one other glazed donut in the box. The rest were filled donuts and not quite the same as a plain-Jane glazed. It was for my husband. I reasoned aloud that I could eat it and he would never know, but he loves glazed, so I couldn't do that to him. And then I said the unthinkable. "I'm going back in there and getting more donuts." Amber just laughed knowingly.

Who goes back in to a donut shop after buying a dozen donuts mere minutes beforehand to get more donuts?!?!

I mean, really! Who does that? Seriously, people, they were that good. It was mind-boggling.

I knew I would regret it if I didn't go back, and I'm not going to later justify driving an hour to just get donuts because I didn't get the glazed when I had the chance!!! So, since we were already there I went back in and got a few more glazed and it was totally worth it.

Amber asked me if I was a convert and I mumbled around delicious chewy dough and crunchy glaze that I was. I told her they needed a t-shirt that stated : "Krumpe's Konvert" haha!

So, if you're ever in the Pennsylvania/West Virginia/D.C./Maryland area - stop by for a taste of history. I promise it will be one amazing donut experience. You won't regret it!
food