Showing posts from May, 2013
Show all

In Honor of Memorial Day...

I recently got my copy of The Civil War Kids 150: Fifty Fun Things to Do, See, Make, and Find for the 150th Anniversary . We are just about to study the Civil War in our homeschooling and I couldn't have been more thrilled about this book. The Civil War Trust published it and I think they've done an awesome job. Below is a review of the book I wrote on Amazon: I get frustrated with children's books that have "historical activities" to help children learn about a specific time period. Most of the time the "activities" end up being crafty and pointless. I was beyond delighted to find that most of the activities in this book are not only meaningful, but impactful for helping kids learn about the Civil War in honor of the 150th anniversary. (There is one crafty, pointless thing - making Abe Lincoln's top hat. We found it was much more interesting and impactful to compare our kids' heights with President Lincoln's as he was 6'4"!
Post a Comment
Read more

I have a wide variety of historical interests, but my greatest love is studying WWII. Lately, I've been focusing a lot on WWII, so you'll be seeing more of that around here for a little while. Making my first Regency gown is still in the back of my mind, especially now that I have the chemise and short stays finished. We're in the final count down time crunch in our homeschooling, so I'm limited in what projects I can focus on at the moment. The dress will have to wait until we've finished our last two subjects: the Civil War and Botany. (My son is in kindergarten, so it shouldn't take that  long!) Anyway, I recently had a conversation with a friend who is a fellow historian of WWII and she asked me if I had heard of the July 1942 magazines. I had no idea what she was talking about. So she excitedly went on to explain that in 1942 the magazine publishing companies were worried that paper was going to be rationed for the war effort which would have been ser
Post a Comment
Read more

Have you heard of the BBC Historical Farm Series? If not, then you're in for a real treat! There are three time periods in the series: Victorian Farm, Edwardian Farm, and most lately Wartime Farm (my favorite!!!). Each installment of the series features two archaeologists Peter and Alex, and one historian, Ruth, who live on the farm for an entire calendar year - working, living, and doing things as the farmers would have done in the particular time period they are studying. What this series is  not : a reality show. (Americans tried to leave their mark with "Frontier House" which, in my opinion, was a ridiculous waste of time and viewer's brain cells. "Colonial House" was a bit better.) This series is even different from the BBC produced "Manor House", "1900 House", and "1940s House" which were Britain's take on reality and, thankfully, much more subdued. There is no inter-personal drama, dramatic pining for modern a
Post a Comment
Read more 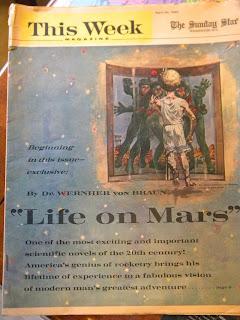 Here's another treasure that I found at the oh-so-fabulous Wonderbook bookstore. When I first saw it, I originally got it with my father-in-law in mind because of its sci-fi subject matter, but the more I flipped through this April 1960 issue of The Sunday Star, the more I was excited about the other fun bits inside. The cover. Have you ever seen the movie "October Sky"? Homer is obsessed with this rocket scientist Dr. Wernher VonBraun. Well, guess who the author is of the feature story? Dr. VonBraun! He totally wrote this short story about life on Mars, using his "genius of rocketry" and "lifetime experience" to write a fabulous space adventure. Haha! How cool is that?! (Can you tell I grew up with Star Trek?) I love the pictures! "The Earthmen encounter their first Martians!" I thought this advertisement was slightly creepy, but so amazingly awesome too. Cute little cut-out people standing on slabs of meat? What?!
Post a Comment
Read more 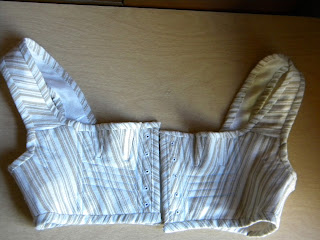 Well, it's finally finished! I think it's the best looking corset I've ever made, which is pretty good considering my lack of patience when it comes to corsets. I really like how the striped linen turned out. I'm not modeling them for modesty's sake, but they are very comfortable. They feel more like a modern bra, but with a very different silhouette. It definitely gives the bust "shelf" of typical Regency fashion. My only adjustment for next time (yes, I'm thinking of making another  one) is that there's about a 1/4" gappage on each side around the gussets, so I think I may need to narrow them a bit. For this corset I may put in a small drawstring on both sides. The front of the corset with the quilting, gussets, and teeny tiny lacing holes. Arrg. I really should have made those bigger. I can't even fit a safety pin through them to aid in my lacing!  I need to find my tiny safety pin and maybe use regular narrow grosgrain ribbon to
Post a Comment
Read more
More posts