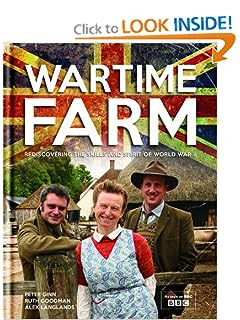 Have you heard of the BBC Historical Farm Series? If not, then you're in for a real treat! There are three time periods in the series: Victorian Farm, Edwardian Farm, and most lately Wartime Farm (my favorite!!!).

Each installment of the series features two archaeologists Peter and Alex, and one historian, Ruth, who live on the farm for an entire calendar year - working, living, and doing things as the farmers would have done in the particular time period they are studying.

What this series is not: a reality show. (Americans tried to leave their mark with "Frontier House" which, in my opinion, was a ridiculous waste of time and viewer's brain cells. "Colonial House" was a bit better.) This series is even different from the BBC produced "Manor House", "1900 House", and "1940s House" which were Britain's take on reality and, thankfully, much more subdued. There is no inter-personal drama, dramatic pining for modern amenities (though Ruth does occasionally wax romantic about the delights of hot, running water), romantic interludes, or even mixing with the modern world.

What this series is: experimental history at its best. They take you through the various aspects of living and working on the farm during that time period, issues they dealt with on a day-to-day basis, how they enjoyed themselves, what it took to survive using the current technologies available to them. It is a fascinating look into history with three experts as our knowledgeable tour guides. The interesting thing is that everyone who comes to visit the farm, who live in the village surrounding the farm, dress in period clothes and appear to lead lives according to that time period, though you don't see that very much in the show. Even Ruth's daughter who comes for a visit from time to time arrives in costume via a period-appropriate conveyance like the buggy or train depending on the time period. Overall, the series is serious about authenticity, but also about the educational wealth that comes from this sort of study.

And another cool thing - you can actually go and visit the farms where the individual shows were filmed! You only have to go to England to do it, but if you're planning a trip over there, you might as well make a stop anyway, right?!

Enough about my historical brain candies - haha! Here are the links so you can explore and enjoy them for yourself:

Oh! And here's a link for a few more videos in the series including "Edwardian Pharmacy" and "Tales from the Green Valley" that I was unaware about until this minute and must now go and watch! :-)

**DVDs are unfortunately not available for sale in the US Region format, dang it!

I do hope you enjoy and let me know what you think!