- June 22, 2013
My family and I were spending a week down in northern Virginia and it was a good opportunity to search out the less-thought of places to visit. (So, we did not go into D.C.) One place that I was looking forward to was a small museum called the Claude Moore Colonial Farm. It was a delightful, inexpensive museum that was perfect for spending a few morning hours with small children. The walk to the farm and around the gravel paths was easy and just the right length for little legs.

This single-family farm is set in 1771 where they are growing rye, tobacco, flax, garden produce, and various livestock like cows, turkeys, geese, and chickens. There were only two actual structures on the large property, but it was a lovely walk through woods and around fields. 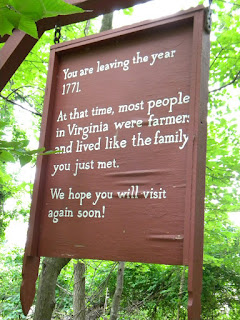 My one trepidation about the place was that the costumed museum interpreters spoke in 1st person. Walking into the clapboard house and speaking with the eldest sister was awkward for me beyond belief! Besides disliking 1st person interpretation in general, being that I've been in this girl's shoes as an historical interpreter just made me so frustrated and a little annoyed! I wanted to drop the silly pretense and talk stays, hearth cooking, and gardening. The latter two we did talk about, but I didn't dare ask her about the first thing for fear of being ridiculously reprimanded for asking too personal a question. Ack! Overall, they were very pleasant, welcoming, and did a good job , but I had to bite my tongue whenever anyone said, "Good day!" instead of "Good Morning". I did have to laugh though when I asked her if they grew any tomatoes (I should have known better - it's 1771!), and she said, "No. No one grows tomatoes around these parts. Thomas Jefferson has been experimenting with them though." hahaha!

Visiting their gift shop was an interesting experience. I'm afraid it was rather random and not very beneficial when it comes to proper museum gift shop stuff (If that sounds weird, there are marketing theories out there, okay?). The most bizarre, but strangely cool thing, was they had this corner of donated items like a thrift shop and a lot of them were antiques. Weird, I know! But I was thrilled to find a 1934 edition of a Nancy Drew book The Broken Locket in awesome condition for $3. Score!
18th century living history museums