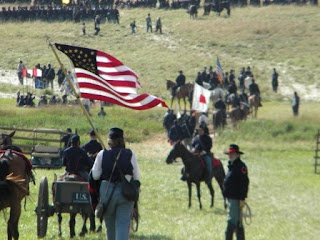 Yesterday at Gettysburg was awesome! And it was tiring, hot, humid, and it reminded me of all the reasons I stopped reenacting. Ha! One wonderful advantage was meeting up with a very old friend and having his tent fly be a refuge from the sun.

This was my first time going to an event in costume with children and that was an interesting challenge. I felt like we were wandering in circles and only taking short little trips to explore which was a little frustrating, but it was what we could handle. We spent a fortune on ice cold lemonades, but we were grateful for the kindness of strangers including a ride on the Confederate tractor shuttle when we accidentally went to the wrong camp waaaaaay on the other side of the event when looking for my friend.


The variety of sutlers was great and I was thrilled to see a dulcimer/old banjo sutler, an old-fashioned toy sutler, and a lady with a nice deal on bone buttons and hat pins which I needed sorely! I was very grateful for the almost constant breeze, but my lovely straw hat took a buffeting. I really needed ribbons on that thing to firmly tie it down as a total of three hat pins was not enough! I really did not get enough time at the sutlers which is a regret, but I suppose it was a sacrifice on my part. I didn't want to abandon my poor husband in the heat with two rambunctious kids, and I suppose I didn't really need to buy anything. Looking is half the fun though! Aaah, well. I did make off with 5 sets of bone buttons, 2 straw fans, and 3 new hat pins! :-)

It was my first time actually sitting down and watching a battle after nine years of reenacting. I was almost always apart of the battle in some way either carrying water buckets or the one time of being a powder monkey. It was pretty enjoyable and it was fun viewing it through the eyes of our 6-year-old boy who was mostly interested in the wide variety of flags. I only regret that we didn't stop by the tent of the U.S. Signal Corps so he could talk with the soldiers there about signalling.

An interesting thing is that a photojournalist from the New York Times came around taking pictures and snapped a few of our kids. He got their names and asked a little about them so... Who knows?! They may be in the New York Times? We'll see. Actually a lot of people took our kids' pictures. I actually did not see that many kids as young as mine in costume, so I suppose they were a novelty. The funny thing is that my son who was the most covered never complained of the heat once and he was the only one that did not get sunburned! Ha! That just shows you that historical fashions were very practical in some ways. Both kids were little troopers and I was pleasantly surprised by how well they did.


Then after the battle in the evening we drove over to the Confederate camp side of parking (which was on the other side of the road from the rest of the event) to see another old friend and as everyone was going the opposite way trying to leave, we had to park and walk the rest of the way up the hill. Luckily we found him and his wife easily and had a lovely chat. (His late wife Suzanne, was my sewing mentor that I mention occasionally, and they were both like a surrogate aunt and uncle to me during my teenage years.) I was so glad I got to meet his new wife too as she is such a wonderful lady. I hope we get to see them again soon.

Overall, we had a great time and the crowds and parking weren't too bad! Going home felt like it took forever, but then again I was hot, my corset was ill-fitting and kept poking me and I was exhausted! It was a nice day-trip down memory lane and best of all, we made some great memories for our kids, I kept a 15-year-old promise, and we got to see some old friends from Indiana. Not a bad way to spend a Friday!