Last night was near zero degrees with a bitter wind blowing about the corners of our little farmhouse. How I wished for a wood burning stove! The next best thing, however, would be a small plate of warm cookies to go with my hot, herbal red chai dosed liberally with milk. And since the kids were in bed and my husband was on the computer doing research for some future home projects, I thought it would be the perfect time to dive right into my first week of rationing recipes. 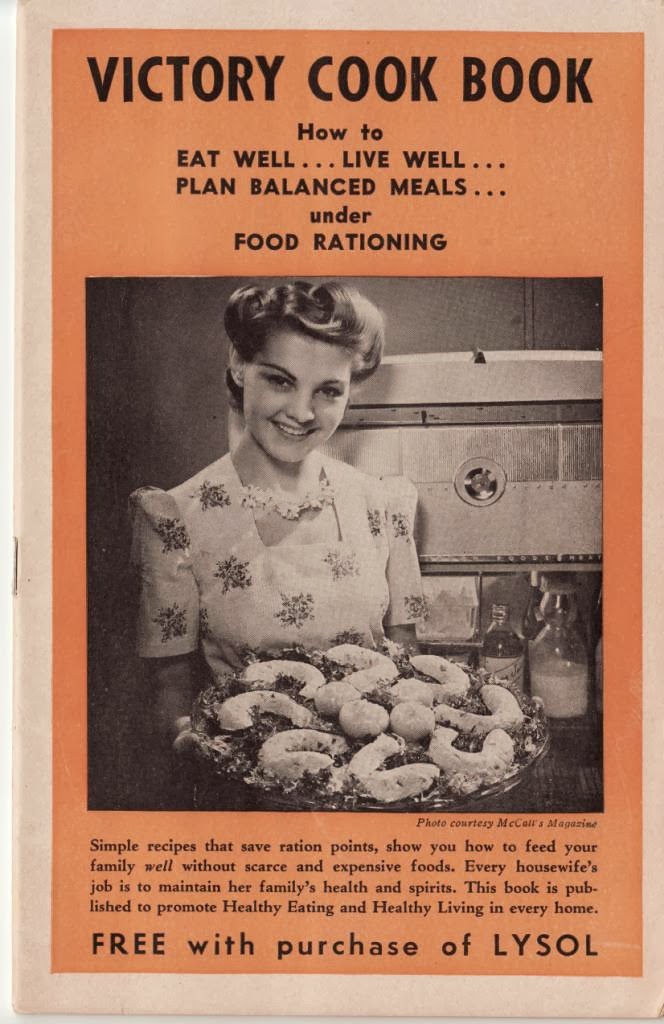 Earlier yesterday, I was going through an awesome little American Victory Cook Book (courtesy of Lysol - 1942) that I acquired recently and picking out recipe candidates when a cookie recipe caught my eye - Oatmeal Drop Cookies. We've all had oatmeal cookies right? Well, this recipe was different. For one, at first glance, it looked to have little sugar in it, and secondly it called for molasses. I have never made an oatmeal cookie with molasses in it! So, that alone peaked my interest. This cookie was the perfect ticket to a cold winter night. 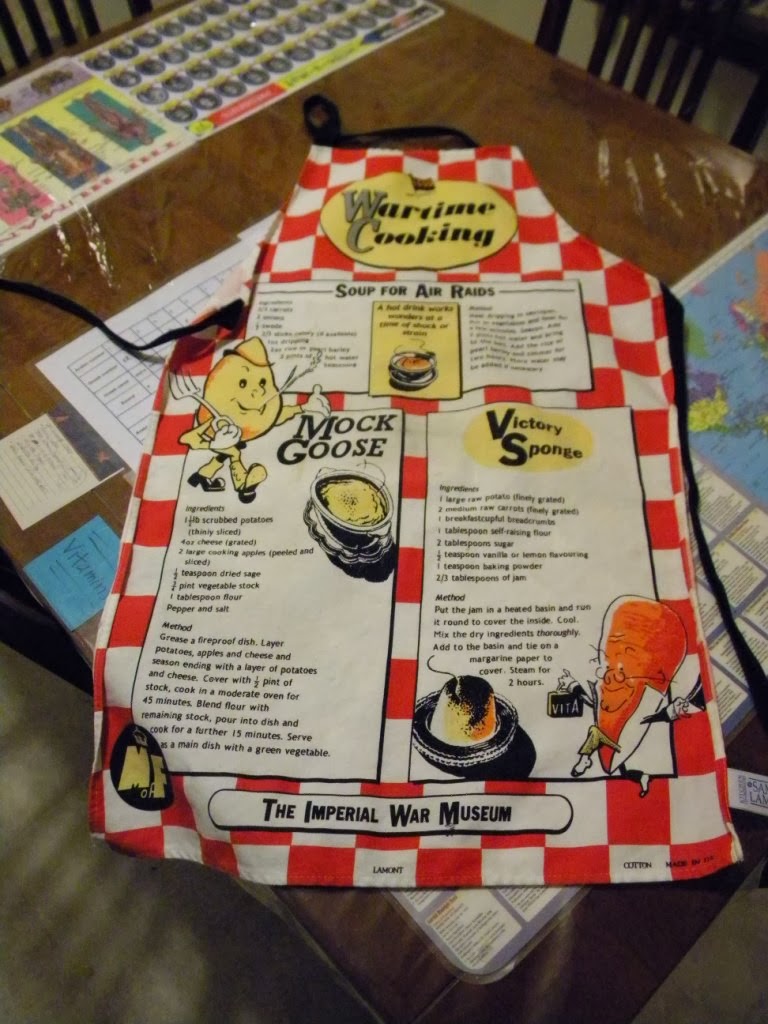 I donned my Wartime Cooking apron (because I just had to, okay?! Don't laugh!) and started in on making the cookies. I went happily along thinking, "This looks like a pretty typical oatmeal cookie recipe."

But then, I got to the second column of ingredients - 1/4 cup of brown sugar... 1 egg... 1/4 cup dark molasses... 1/4 cup orange marmalade?! (Can you tell that I'm guilty of not reading recipes through thoroughly? Ha!) So, the orange marmalade threw me for a loop, but luckily I had some! Fancy that, eh? And just think the week before I had contemplated throwing it out because we rarely eat it and my kids won't let it touch their PB&J sandwiches or biscuits. Lucky me, because it was 8 pm and I wasn't going to try and go out to a store to find orange marmalade with weather like that outside! 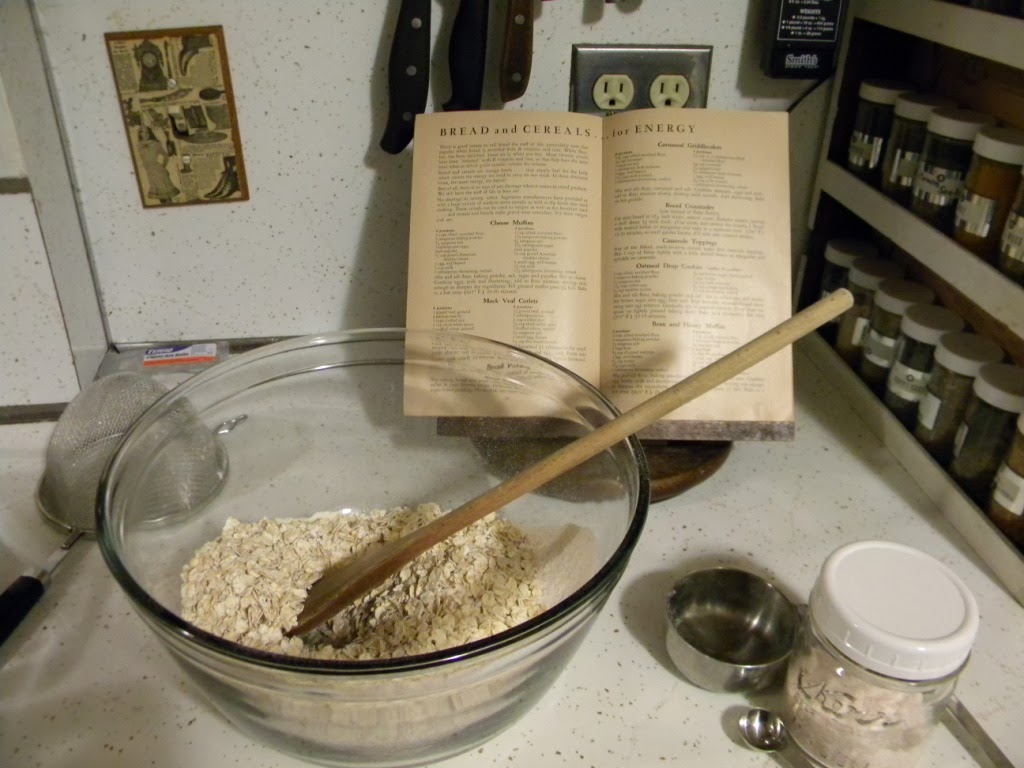 So, moving on, I whipped it all up, following the recipe to a T (except using butter instead of shortening as I didn't have any), and it seemed kind of runny at first, but the batter thickened up a lot in a few minutes. It may have been because our house was so cold, but then again maybe not. (It was probably just the oats thickening things up, though.)

I'm a sucker for cookie dough, so of course I tried some and it was really delicious! I was getting anxious for my hot tea and cookies, so I spooned the dough all out onto my cookie sheets, being very careful to portion out 36 cookies like the recipe says, because I wanted to get an accurate size for these 1942 cookies. We all know the portion sizes in the 1940s were a lot smaller than they are today. 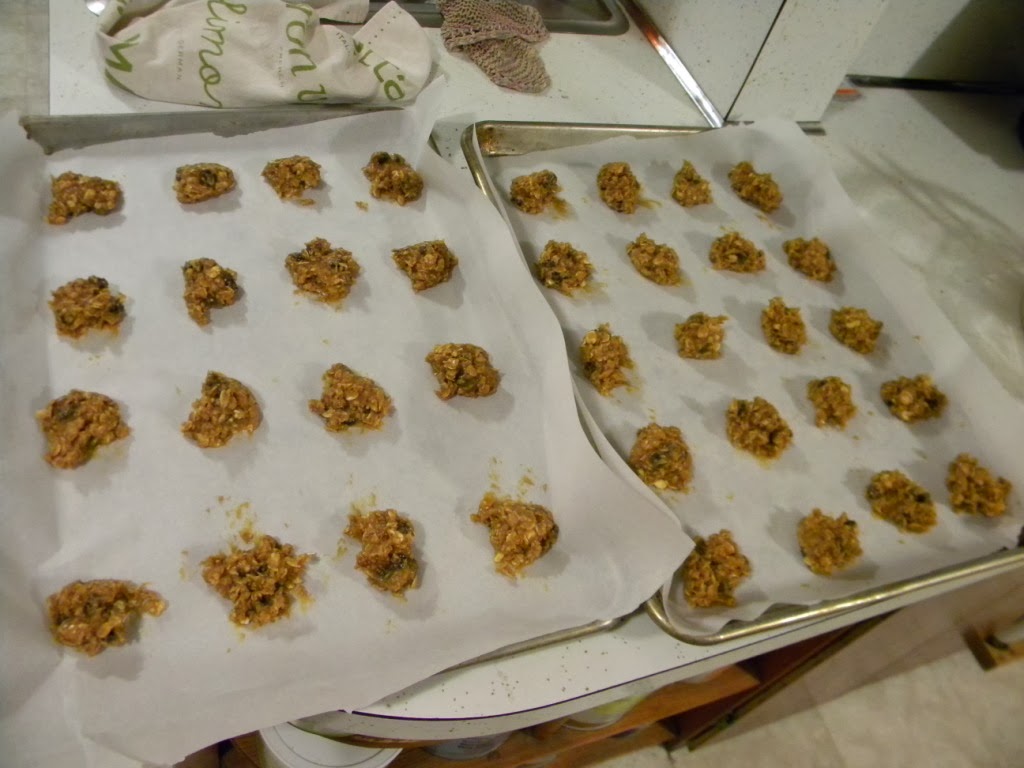 I popped them in the oven and waited impatiently. I got my tea all ready (I keep a quart ready-made in the fridge so I just heat it up, add milk and drink!), and after 15 minutes they were done. Yippee!

As soon as they were cooled enough to not melt my mouth I gave one a try. Ooh, my goodness. It was unlike any cookie I had ever had! The earthiness of the molasses paired delightfully with the floralness of the orange marmalade. It was amazing! And they still are a day later. My 6-year-old son declared them a success, but my 3-year-old daughter made a face after one bite and unceremoniously spit it out in the sink. Well, 50/50 isn't bad! I think it's the molasses. It has a very strong presence in these cookies, but in a good way. (The cookies were awesome with my tea, by the way.)

What I learned:
I learned quite a lot, and is it silly to admit that I was surprised? I mean, how much can you learn from one cookie recipe?

For one, the recipe really deceived me in how much sugar it called for. A standard oatmeal cookie recipe calls for about 3/4 cup of sugar. Even though at first glance I thought it had very little sugar, it still had the 3/4 cup of sugar, but in different forms - 1/4 cup brown sugar, 1/4 cup molasses, and 1/4 cup orange marmalade. A very clever way to not use any white sugar at all! Not to mention the flavor was phenomenal.

And secondly, with the stiff batter, the cookies didn't spread much, and while I wouldn't say they're dense, they are definitely sturdy. This would have been an excellent and important qualification for sending these cookies to soldiers overseas.

I'm guessing they keep well. I might leave one or two - if I can't help from eating them! - for a week and see how they hold up. Anyway, I'd say this recipe is a delicious success. Try it yourself and see! You might even want to substitute in another type of jam to change it up. Doesn't strawberry or apricot sound awesome?
Let me know if you try them!