- January 25, 2014
For this week's ration recipe I thought I'd give the Brits a try. I love reading about the British homefront stories of WWII, and it's wonderful because there is so much to read about. I have very special and fond memories of going to do WWII research at the incredible Imperial War Museum in London and reading about British women during the war. If you're ever in London, that is a must-see place to visit!

My recipe for this week is an interesting one: Scotch Eggs. In a quick internet search I found that the term "Scotch Eggs" originated in Scotland, but the date of the actual creation of the dish is debatable. Scotch Eggs basically consist of a hard boiled egg coated in mince or sausage meat and bread crumbs then baked or fried. I thought it sounded delicious!

But we're talking about WWII here and so of course there's a catch. This recipe doesn't use fresh eggs, but dehydrated eggs. The British had to deal with rationed eggs and therefore the advent of powdered, or dehydrated, eggs into the British wartime diet.

BBC History's website has a great section on rationing during WWII. Here's a quote below. Keep an eye on how many eggs were allowed for 1 week:

Can you imagine going on one fresh egg for one week per person? If you had one fresh egg, what would you do with it?

The recipe for Scotch eggs that I used comes from Marguerite Patten's book We'll Eat Again. (This book is available as a stand-alone book or as part of a 3-book compilation entitled Victory Cookbook.) I love Marguerite Patten! What a treasure of knowledge that woman has! She worked for the British  Ministry of Food during WWII as their Home Economist and later was able to broadcast her favorite rationing recipes to a wider audience on the BBC Kitchen Front radio broadcasts. She and her colleagues traveled around giving demonstrations. She says that, "our campaign was to find people, wherever they might be, and make them aware of the importance of keeping their families well fed on the rations available." Her book is chock full of British wartime recipes, many of which I want to try! So, you'll be seeing a few more recipes from her book on here for future Project 52 weeks.

Just a forewarning - I'd say the skill level for making this version of Scotch eggs is advanced. There is a bit of technical skill involved. 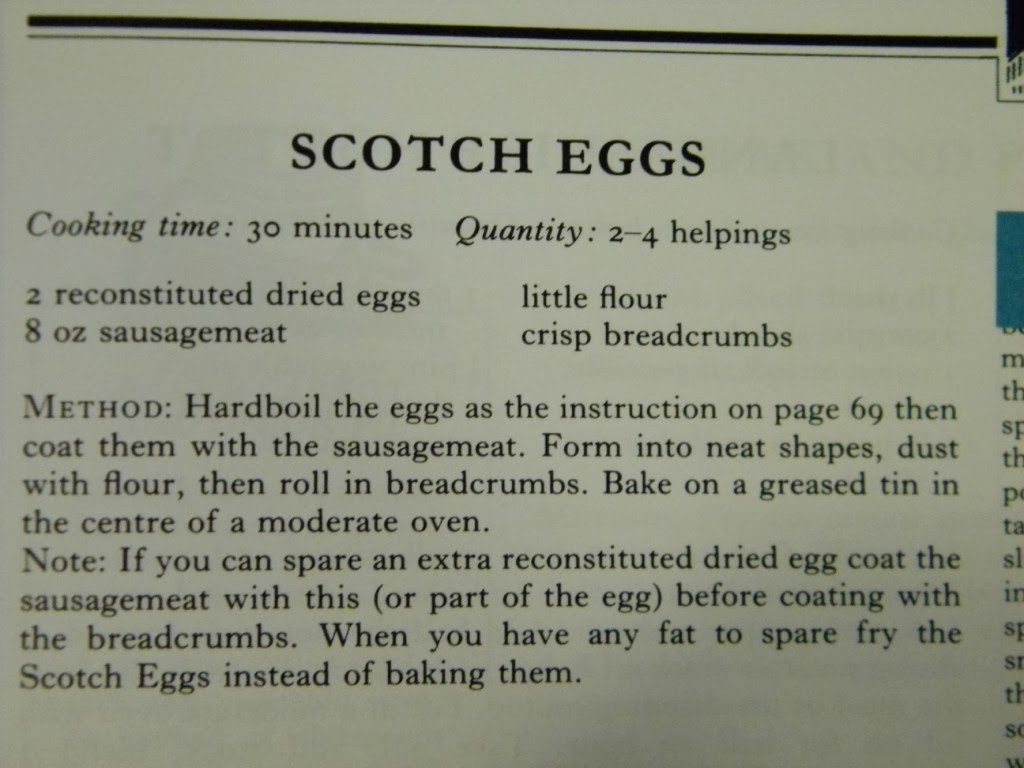 The first step is getting the reconstituted dried eggs hard boiled. I had to dig a little through the book to find the accompanying recipe because sadly there is no index and worse - no page numbers! 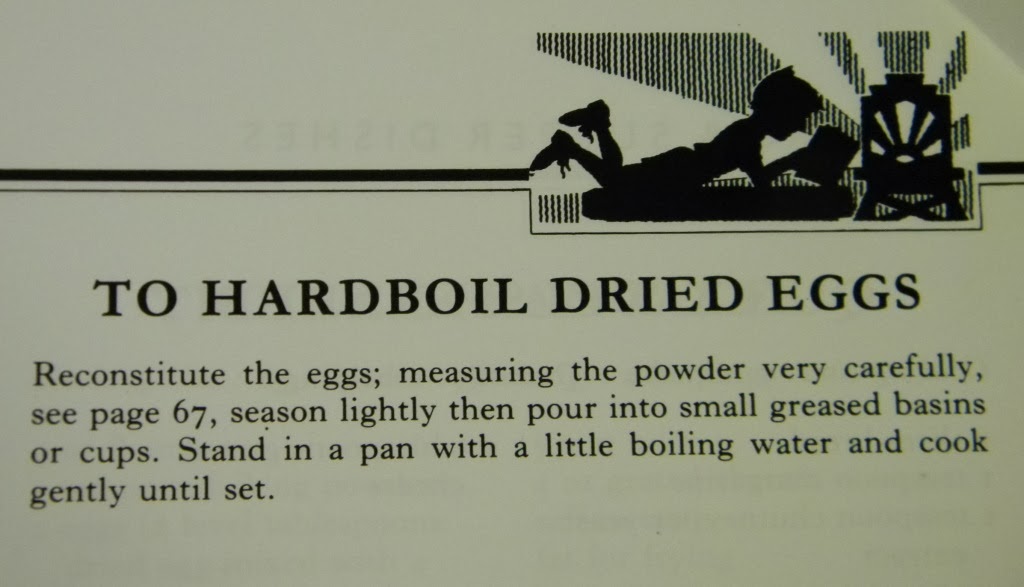 When it came to cooking the eggs I had a really hard time. The eggs took forever to cook. I left them open in the pan of boiling water and the ramekins rattled like crazy, but the eggs only thickened to a custard-like consistency even after 30 minutes of cook time. I thought that it was a ridiculous waste of time and electricity until I realized that the darn eggs just needed to steam themselves and put a lid on it. Five minutes later they were done. Sheesh! It would have been good to know that in the recipe.

Then came the really difficult part of this recipe: "coating the eggs in sausage meat". I actually laughed, because that was easier said than done as the eggs were so fragile! So, what I ended up doing was making a flattened sausage patty, gently placed one of the eggs on top, made another thin sausage patty and put it on top, pressing the sides all around so it made a sausage/egg sandwich. Then I heated up some leftover bacon fat (because the recipe says if you have any spare fat you can fry it with that). While that was heating I held the sandwiched patty in one hand and dusted first one and then the other side with flour, scooped out some extra reconstituted egg and patted that on both sides, and then I patted on some breadcrumbs all the while having to hold it gently in one hand. It was quite the juggling act! What I ended up with were two hamburger-looking patties. They looked pretty good!

While the first one was frying I made the mistake of trying to flip it like a pancake. That was not a good idea as you can see from the giant crack in the top:

The second patty went much smoother as I tipped it over using the side of the pan to help it slide back down. It looks much prettier:
Then came the taste test. I'll freely admit I was a wee bit scared! So, I did what any self-respecting wife would do - I told my husband his breakfast was ready. Haha! He was such a good sport about it. He knows all about my ration recipe experiments and was willing to give it a try. He said it was pretty good, so I gave it a bite too.

First impressions: it's salty, with a good density on the meat, the fried outsides have a nice crunch, but WHOA those eggs have a freaky texture!

Conclusion: I think if I was really hungry and had no other egg option I would totally make this, but let's face it. Powdered eggs will never taste like fresh eggs.

Next time I think lard would be a better option for frying. The bacon fat was way too salty in addition to the already salted sausage and eggs. The egg itself was edible, in my opinion, because it was coated in very flavorful sausage. If I had to eat the eggs straight... I might skip breakfast. I have a lot of admiration for those Brits who muscled through their powdered eggs every morning!

One other note about the recipe when it comes to serving sizes of the time - This recipe says it's for 2-4 portions. I actually used 2-eggs worth for each patty. So, in that sense I didn't follow the recipe as religiously as I should have. I think the eggs would have been a lot thinner and therefore even less noticeable in the sausage while still getting the nutrients from the eggs. But, I also think by today's standards it would work for 2 adult portions or 4 child portions.

If you can't get ahold of powdered eggs, I say try the recipe using fresh. A lot of people kept chickens during the war, so it would still be authentic and you could cook it using the same techniques.

Have fun and leave a comment if you make it telling about your experience! 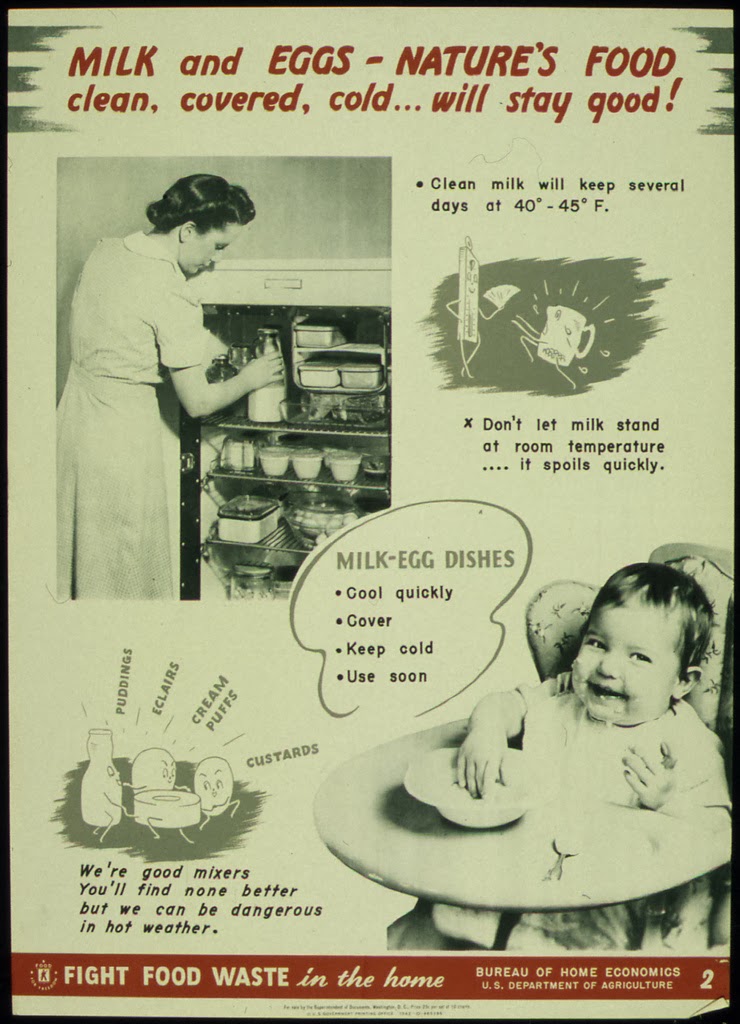 August 15, 2015 update: I found a great video by Jas. Townsend & Son where they make an 18th Century version of Scotch Eggs. I have to say theirs looks much tastier and easier to make!