- January 30, 2014
This week was my husband's birthday, so I asked him if I could make his birthday cake from a rationing
recipe and he agreed. I was really excited!

It was a little tricky finding just the right cake. Should I go with a British recipe like a sponge or should I try and find a classic American vanilla cake with chocolate frosting? With dried fruit or plain? And from which source would I find the recipe? In one of my books, a pamphlet, or magazine? In the end I settled on a unique recipe for Raised Chocolate Cake with Sugarless Boiled Frosting from Grandma's Wartime Kitchen by Joanne Lamb Hayes which I've mentioned on here before. Her book has an index in the back, so since I was in a rush, her book was the easy choice!

This cake recipe is pretty standard except that it calls for yeast. I've never heard of a cake that called for yeast, so I was very intrigued.

I had two substitutions that I needed to make in the recipe. One is that it called for shortening. And second is that it called for corn syrup. I am nutritionally opposed to both shortening and corn syrup, so this is a dilemma I have to deal with in these recipes. Do I adhere strictly to the recipes for historical recreation's sake? Or do I make a substitution if I don't have or want to use an ingredient? The historian in me says to do the former and adhere strictly, but I also have to think about how my family and I are actually going to be eating this food. Our health is important to me, so I decided to go with substitutions. I'm sure women of the 1940s were required to use substitutions as well when they weren't able to get certain ingredients, so I don't feel I'm doing a total disservice to the recipe. My substitutions are as close as I can make them.

For example: for shortening I used butter (there are "healthier" shortening alternatives as well that I've used in the past which I might purchase again), and for corn syrup I make my own cane syrup made by boiling cane sugar and water to a thick syrup consistency. It makes a wonderful corn syrup substitute. My inner-historian isn't 100% pleased, but oh well...

If you're interested in food history, here is a quick and dirty history of shortening on wikipedia and a biased history of Karo corn syrup. (According to the Corn Refiners Association, corn syrup was invented in 1882.)

Besides the yeast addition, beating up the batter was very straightforward and familiar with other cake batters I've made in the past.

You're supposed to let the cakes sit out for 1/2 hour until bubbly to let the yeast rise some. Our house must be too cold, because not much bubbly was going on. I was in a hurry to get the cakes done before hubby came home, so I popped them into the oven anyway.

I'm pretty sure they were supposed to rise a lot more, but I was still pretty happy with the cake. The baking smells filling my house were very strange - it smelled like I was baking yeasty chocolate bread. Weird. 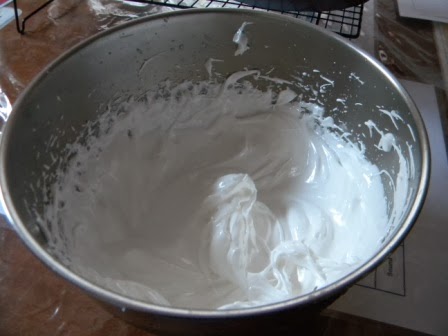 So, next I had to make the Sugarless Boiled Frosting. I was slightly intimidated by this recipe. You have to put the egg whites, corn syrup, and salt in a double boiler and beat it with an electric mixer while it's sitting and cooking over simmering water. This was a totally new experience for me! I've never used an electric mixer near my stove, but I gave it a try and let it heat while mixing. It wasn't as hard as I thought, though you do need to be careful of the cord near your stove. The recipe says it takes about 7 minutes to whip up to stiff peaks and it does, but the result was amazing - the mixture whipped up to this luxurious glossy pure white frosting. I actually cut the recipe in half because I didn't have enough cane syrup after using it in the cake. I thought it was just the right amount of frosting though. It's not like I needed leftovers!


This cake was a success! It made a lovely birthday cake. Both the cake and frosting were sweeter than I was expecting. I might put in less brown sugar next time. I found the frosting had an interesting texture, but couldn't quite put a finger on it. I let my 6-year-old son try it and he immediately said, "It tastes like marshmallows!" He totally hit it on the head. This frosting should really be called Marshmallow Frosting. It reminds me of marshmallow spread. And just so you know, you need to spread it while it's warm. It starts to stiffen as it cools and keeps its shape very nicely. I can see why it was popular for wedding cakes.

Some historical notes and thoughts:
Ms. Hayes mentions that the Sugarless Boiled Frosting was used a lot for weddings and the recipe makes a lot from so little ingredients.

Both recipes are made using an electric mixer. Not true to the 1940s, you think? Well, it is! I was stunned to walk into an antique shop a couple years ago to find a 1930 Sunbeam electric mixer. I guess I never realized that they've been around for so long. Kitchen work was revolutionized far before our modern Kitchen Aid mixers came around. For some reason this is a comforting thought and makes me really happy! :-)

I think our modern definition of cake has spoiled us for good homemade cake. Homemade cake never seems to be as tender as box mix or store-bought cake (full of additives and chemicals). And so now we think that's the way cake is supposed to be. Have you seen the Disney movie "Pollyanna"? There's a scene where Pollyanna is at the church bazarre and she buys a gigantic piece of layered cake and walks around eating with it in hand - no fork required! That, folks, is real cake in my opinion. I think this Raised Chocolate Cake recipe is just that sort of cake - sturdy, full of yummy homemade flavor, and yeah, you could walk around with a piece in your hand without it all falling apart. I'd say that's a bonus, wouldn't you? Give this recipe a try and see for yourself!

One last note - while perusing rationing recipes I found quite a few desserts that called for crumbled cake crumbs. What a thrifty way to use your leftover, dried-out cake!

Grease two deep 8-inch round baking pans. Combine warm water and yeast in a cup and set aside for yeast to soften.

Beat together brown sugar and shortening until fluffy. Beat in eggs one at a time, then corn syrup and vanilla.

Stir together flour, cocoa, baking soda, and salt. Add to sugar mixture along with yeast mixture. Beat just until smooth.

Divide batter between greased pans and set aside in a warm place 30 minutes or until it begins to look puffy.

Preheat oven to 350ºF. Bake layers 25 to 30 minutes or until a toothpick inserted in center of each comes out clean. Remove to wire racks to cool completely before frosting. Fill and frost with Sugarless Boiled Frosting, if desired.

Combine corn syrup, egg whites, and salt in top of a double boiler. Place over simmering water and beat with an electric beater until the mixture stands in stiff peaks - about 7 minutes.

Remove pan fro hot water and fold in vanilla. Use to fill and frost 2 (9-inc) layers. Serve cake within 2 to 3 hours and store any leftovers in the refrigerator.