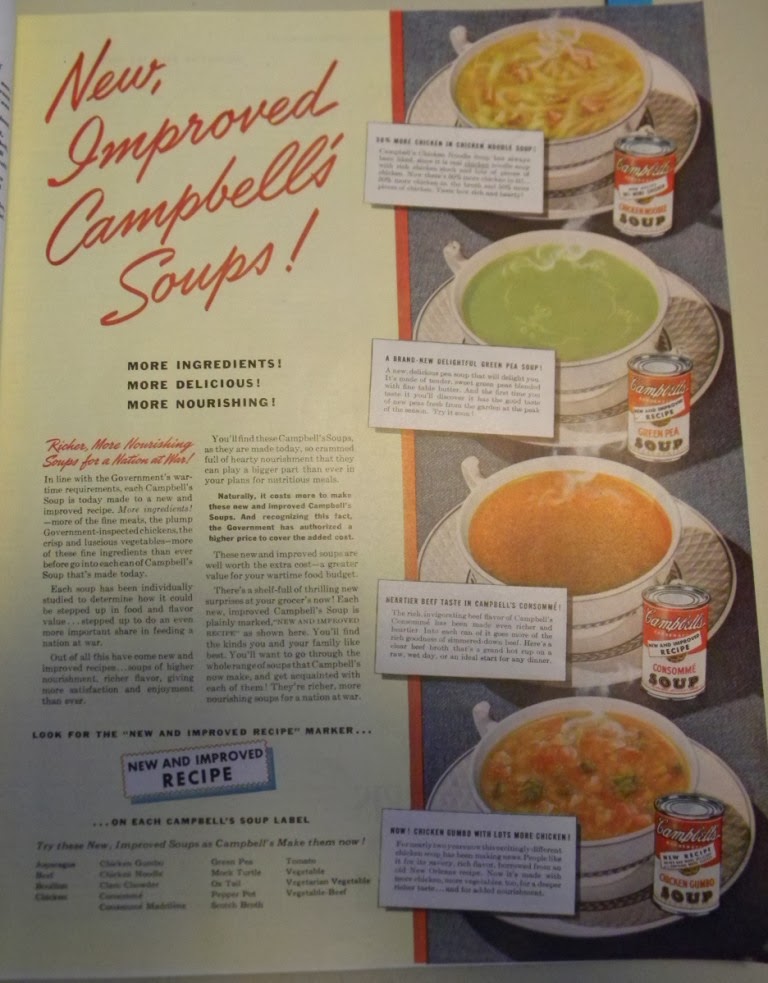 This week's ration recipe might come as a surprise, because there is no recipe! I promise I didn't cop out! We had an ice storm and were without electricity and internet for 2 days. It's been a little stressful, but we made it through and I'm still catching up on so many things. We did have our generator running off and on, and therefore had periodic access to our microwave, but that does not make for easy or authentic 1940s cooking/baking!

So, during the miniature crisis, it got me thinking about "quick and easy" meals during WWII. What could I do for rationing that didn't use the stove or oven, but I could get by with using the microwave? Well, early one limited-power and internet-less morning, I was flipping through the December 1942 Ladies' Home Journal borrowed from my good friend Lori. As I flipped along I came upon two different soup ads - one for Campbell's and one for Heinz. And I thought... "This could work!"

Canned soup companies touted their products as being packed with nutrients and being a good choice for an economical, delicious meal for hubby or the family. I love the ad above. Here's a quote:

"Richer, more nourishing soups for a nation at war! In line with the Government's wartime requirements, each Campbell's Soup is today made to a new and improved recipe. More ingredients!... Each soup has been individually studied to determine how it could be stepped up in food and flavor value... stepped up to do an even more important share in feeding a nation at war. Out of all this have come new and improved recipes... soups of higher nourishment, richer flavor, giving more satisfaction and enjoyment than ever."

Love it! The nation's health while at war was a big focus of the government and I love seeing how food companies like Campbell's took that challenge on by changing recipes and adapting their advertisements to lure those customers in.

Another side to this story is that during the war, tinned food companies were in a difficult position. Metals, like tin, were rationed and desperately needed for the war effort. From what I understand, the government worked with companies that needed these rationed materials so there was a balance between allowing the businesses to operate and providing for everything the military needed. One method of dealing with this issue and still being able to make a profit was by making condensed soups (which equaled less water volume) whereby the cans could be made smaller.

On a side note, when I was doing research for a paper on the advent of the frozen food industry in the late 1930s, I found some articles talking about how frozen food got a huge boost during WWII because frozen food wasn't packaged in tin unlike the canned counterparts and didn't suffer as much as a result. 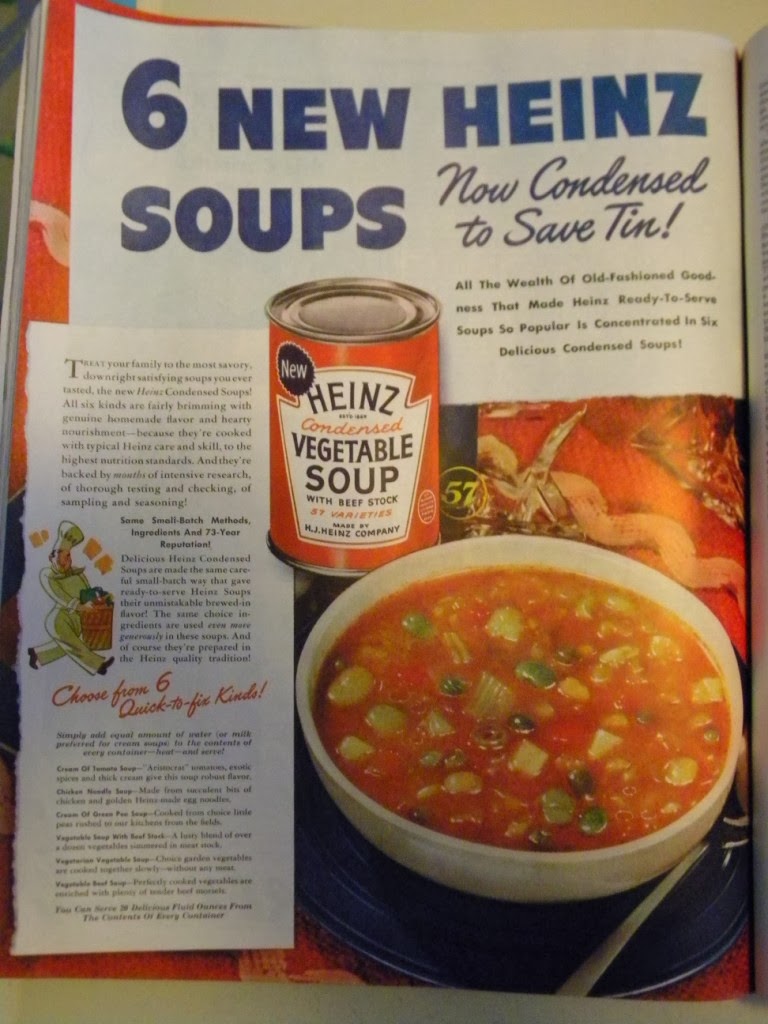 I saw a number of the soups from Campbell's, but none from Heinz. After an online search I found a lot more and I put a star by the ones that you can still buy today for a comparison. It's too bad they don't make Ox Tail or Scotch Broth anymore! Ox Tail soup is awesome for when you're sick, especially with a sore throat. I've recently seen a traditional recipe for Scotch Broth and saw a recipe for it in my British Victory Cook Book as well, so that's on my list to try!

So, I bought a couple cans of Campbell's soup and had planned to heat them up in our microwave, but on our way home I stopped to check on a friend. As she finally had her electricity back, she invited my kids and I in for a warm lunch and I was able to heat my soup up on her stove. Warm house, warm food, and warm friends - you can't ask for more!

I promise next week I'll have another recipe. However - all is not lost! You can always get 1940s creative and buy a can of soup to either plan your meal around or buy a can of broth, chop up and add your own veggies and meat and have your own bowl of rationing goodness - "so crammed full of hearty nourishment that they can play a bigger part than ever in your plans for nutritious meals"! Perfect for a wintery evening. :-) (Keep to the "Healthy Request" to stay away from the MSG/sodium nitrates.)