- February 27, 2014
Week 8 has arrived in my ration cooking project and I am sweeted out. In our family we have 3 birthdays that are each 2 weeks apart, and Valentine's Day in the middle doesn't help. We quickly become tired of cake and ice cream. I'm seriously thinking of threatening our son with no cake or ice cream for his upcoming birthday. I just don't want any more cake in the house! Maybe I can convince him of a berry pie with custard or something of that sort? Just something not very sweet.

So, naturally, with having sweets-overload I wanted to make something more savory this week. I flipped through some British recipes in my Victory Cookbook compiled by Margeurite Patten and found just the one - Scalloped Vegetables with Bacon.

There's a lot that I like about this recipe just by looking at it. For one, you can use a bunch of vegetables you just have on hand. This would have been great for whatever you had growing in your victory garden or for spare vegetables you had on hand. It's a great way of getting in a lot of vegetables with your meal too. I think this is considered a main dish with the addition of a few delicious strips of bacon.

Another great thing that I love about this recipe is that it calls for "national flour" which is something British citizens used during the war. I've been wanting to make a recipe with national flour for awhile. I was always curious what exactly made this flour different than the average refined white flour, so I did a search. I hate that the only thing I can find about national flour is on wikipedia, but they seem to have good sources. The article I found states that national flour consisted of 90% wheat and 10% other grains - oats, barley, and rye as well as some oxidizing agents to aid in the flour's baking qualities. National flour was adpoted in Britiain in 1942 for health reasons and wheat import concerns. Britain imported a lot of food, but they lost a lot of those ships to enemy bombers and submarines during the war which was why they had to strategically turn to their own land to produce most of their food. All very interesting! (You can learn more about this in detail by watching BBC's Wartime Farm.)

Anyway, I'm happy this recipe calls for national flour. I have a grinder as well as oats, wheat, rye, and barley, so I'm going to make my own national flour! (even though the recipe only calls for 2 Tbsp. haha!)

I used 9 tablespoons of wheat and 1 tablespoon of the other grains combined.

I like this little cartoon below from my British Victory Cookbook. "Why is a potato like a lump of sugar?" In the 1940s their view of starch and sugar was a bit different than today. Sugar was considered a good energy food along with starch. The British government was also very big into encouraging the British public to eat potatoes "in their jackets" for the nutrients. Potatoes were filling without the use of grain or meat.


First I needed to gather my vegetables, clean them, and cut them up.


After cooking the vegetables, I arranged them in an oven-proof dish. Well, I used two dishes because my Fire King dish was too small. I made a sauce of the melted butter, national flour, and the vegetable water - which is essentially a white sauce. I love how they emphasize using that vitamin-rich water! I had to add a little extra water to thin the sauce out some more. (I also cheated a bit and ground some pepper over the vegetables.) Then I poured the sauce over the veg, laid the bacon out over the top and then sprinkled on the bread crumbs.

I broiled it on 375º in my toaster oven for about 20 - 25 minutes. Everyone's oven is different, so you'll want to broil it until the bacon is crisp and the bread crumbs are browned.

Incidentally, this is what was served for dinner! I can see how it would have made a good main meal. Personally, I'm sensitive to starchy foods like potatoes, so I couldn't eat too much of it. But as my husband said, "It's pretty tasty!"

Give it a try! You can always substitute different veggies that are lurking in your crisper drawer. :-) And you don't need national flour to give it a try, either. The recipe says you can use fine oatmeal - something you can make in your food processor. 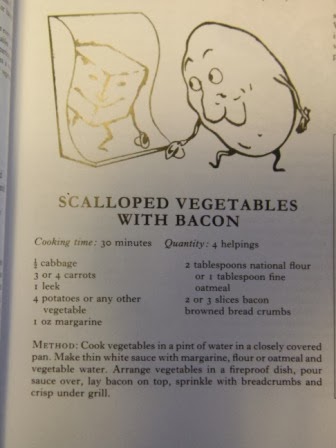