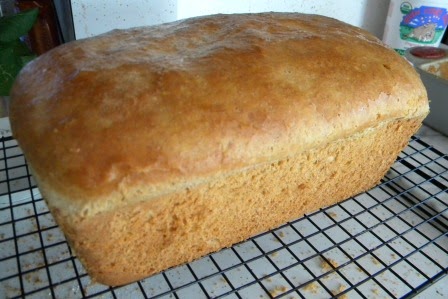 I was excited to finally get around to making a loaf of ration bread for this week's recipe. There's nothing so comforting as a fat slice of freshly-baked bread! I anticipate making a few bread recipes this year just because there are so many recipes for bread out there, even in the 1940s. Not to mention American and British bread recipe are sure to differ in some ways. It will be fun trying out the different kinds!

I chose an American recipe out of my Grandma's Wartime Kitchen book. It looks a lot like a regular bread recipe except it uses maple syrup as a sweetener and unsifted wheat flour (the bran is not removed). It still uses all-purpose flour, though. It promised to be a delicious loaf of sandwich bread which is what I needed. Next week I'll be talking about sandwich fillings and will be highlighting a few unique spreads. I couldn't just use store-bought bread, so a loaf of homemade was a must!

There's nothing too fancy about this week's ration recipe. Below is the recipe with a few of my comments:

1. Heat milk in a small saucepan over medium heat until bubbles form at edge of pan; stir in maple syrup, shortening, and salt. Transfer to a large bowl and set aside to cool to 105º to 110ºF. (or until it feels just warm to the touch instead of hot.)

2. Combine warm water and yeast in a cup and set aside for yeast to soften.

3. When milk mixture has cooled, add 3 cups all-purpose flour, the whole wheat flour, beaten egg, and yeast mixture; stir until a soft dough forms. (If you don't have a stand mixer to do all the mixing and kneading, a Danish dough whisk works amazingly well for stirring the dough! It works even better than a spoon and saves some elbow grease.)

4. Turn dough out onto a work surface sprinkled with some of the remaining 1/2 cup flour. Knead 5 minutes, adding as much of remaining flour as necessary to make the dough manageable. Place dough in a greased bowl, cover, and set aside in a warm place until double in size - about 1 hour.*

5. Generously grease a 9-inch loaf pan. Shape dough into a log and fit into greased pan. Set aside in a warm place until double in size - about 45 minutes.

6. Preheat oven to 350ºF. Bake 40 to 45 minutes, or until golden brown and loaf sounds hollow when tapped on top.** Cool at least 30 minutes before cutting. I know it's hard to wait!

*Notes: Modern bread-making scientists have found that 2 risings isn't strictly necessary. Feel free to follow the recipe, but if you're in a pinch for time, after kneading, just skip ahead to step 5 and proceed from there. The bread still turns out great!

**Thanks to a King Arthur Flour recipe, I discovered that there is a sure-fire way to tell if your loaf is truly done - no tapping to hear a "hollow" sound needed! The tool you need is a thin-needled food thermometer. After the baking time is done, stick the thermometer into the center of the loaf. If it reads between 190º and 195ºF, then it's cooked all the way through. If the temp is lower than that, just stick it back in for a few minutes. It's amazing and so simple!

The bread turned out wonderfully! Especially, when it's still warm and soft, the maple syrup is surprisingly apparent and it's a lovely taste. Aah! I adore homemade bread. :-)