- March 07, 2014
You might be surprised to learn that this week's ration recipe for Crumb Wafers comes from a 1930s cookbook published by the dairy company Borden. Am I cheating, you ask? I don't think so, and here's why. A disadvantage of looking back on history from today is that we tend to look at periods of time in a static way - of one moment standing still. Many times it's just easier to comprehend that way, but history has much more depth and richness. Different seasons of social customs, fashions, language, technology, and even recipes ebbed and flowed into each other in the past just as much as they do today.

So, for example, let's say you were born in the mid-1930s. Your mother had been baking these Crumb Wafers from a cookbook she had acquired before you were born. Then along comes WWII. People didn't necessarily stop making all the foods they made before. Of course they tried new recipes and time-saving techniques in the kitchen, but no doubt they also adapted recipes they loved and enjoyed for rationing or continued to use recipes that worked well with rationing conditions.

And that was my whole point for choosing this recipe for Crumb Wafers this week. The recipe is circa approximately 1930 (judging by what the women are wearing and their hairstyles pictured in the cookbook), and yet it fits really well into the rationing era of WWII. I really like this cookbook. It was a rare antique shop find and I felt very fortunate to stumble upon it.

This cookbook was a product of a contest put on by Borden. They asked American women to submit their recipes featuring Eagle Brand Sweetened Condensed Milk with the chance at winning cash prizes. The book then unfolds various "magic tricks" using the "amazing sweetened condensed milk!!" I love the fun headings for the cookbook (which is more like a magazine):

"These recipes take the CUSS out of custards!" haha!

"Sauces made in a twinkling!"

"Who said ice box cakes are hard to make?" I don't know!

"Even a timid bride can make these pies and tarts!" (It's true. These recipes are really easy!)

"Beverage secrets that save you time, or trouble, or money... or all three!" What a relief!

Haha! Isn't history so much fun? The cookbook also makes reference to a woman named Jane Ellison who gave frequent morning radio broadcasts in the 1930s featuring "Magic Recipes". It appears she was a representative of Borden as she promotes their product at the back of my cookbook with some helpful advice. I do believe the advertisement below is for my very own cookbook - "Magic in the Kitchen". Haha! I just find it perfectly thrilling when I find these little matches of ad & booklet!


Now, on to the recipe!
A really cool thing about it is that it only has four ingredients! Isn't simplicity just lovely? 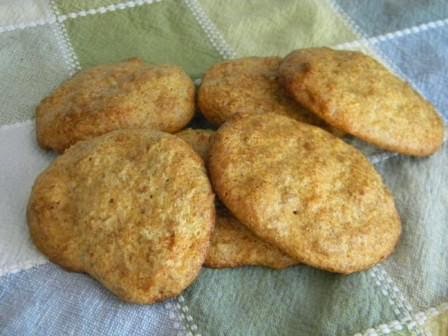 These cookies were... interesting. You bite into one and the flavor gets you thinking about coconut macaroons (which is what they are essentially), but the texture is much softer and a bit bready in a way - not crunchy and chewy like you'd expect. They weren't my family's favorite, but the flavor is very pleasant with the subtle graham cracker flavor mixing with the coconut. The texture is just something to get used to. My husband thought the texture reminded him of pumpkin cookies. They are very sturdy too, so shipping them overseas could have been a good option for these little guys.

To be honest, you might want to skip the egg whites and even the baking and just eat the dough! The dough was seriously good. I'm happy I tried the recipe. It was unlike any cookie recipe I had ever seen! 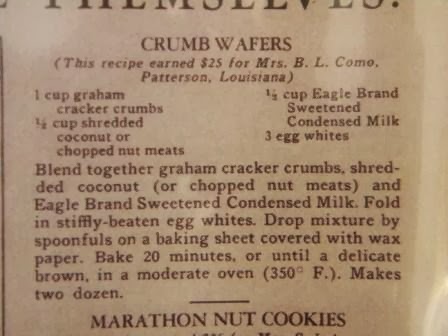