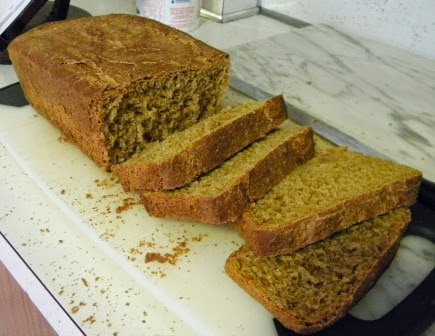 I needed to make some bread for dinner, and thought it would be the perfect time to try out another rationing recipe. I wanted to try something different and was pleased when I found this recipe for Plymouth Bread in my October 1943 Westinghouse Health-For-Victory books. This recipe is in several of those books, so it makes me wonder if it was fairly popular or historical and had been around for quite awhile, especially with a name like "Plymouth Bread".

What's unique about this one is that it uses cooked cornmeal. Using cornmeal to replace part of the flour was a smart way of saving on rationed flour.

What I also like about this recipe is that it makes use of molasses - a ration point-friendly sweetener. I like finding new uses for molasses. :-)

Another interesting aspect of this recipe is that it calls for 1 cake of yeast. I did a search and you can still get cake yeast. I'm tempted to order some because quite a few ration bread recipes call for it. The measurements are different than granular yeast. The Red Star company had some helpful info on their site. Unfortunately, since I didn't have cake yeast I had to convert to the granular yeast. My guess is that they used 1 oz. yeast cakes, but I'm not sure. If the recipe did mean a 1 oz. cake, then the equivalent would be about 4 - 5 tsp. granular yeast which would be about right for a 2 loaf recipe.

Back to cornmeal - the first step in the recipe is to boil a 1/2 cup cornmeal in 2 cups water. Cook it for about 15 minutes until it is thoroughly soft. 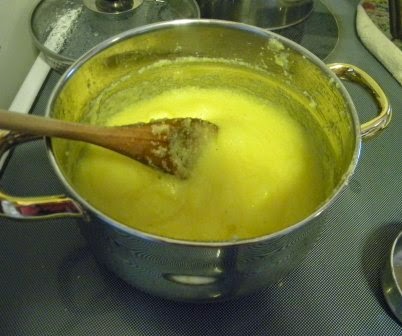 Stir in the molasses. What a pretty color! 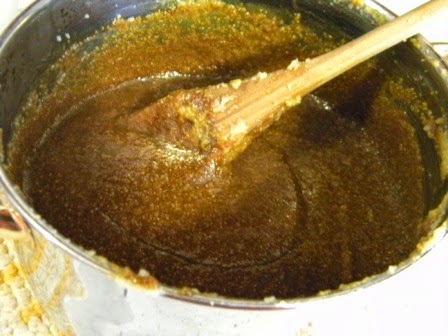 Scald the milk, cool, then add the yeast which has been softened in 1/2 cup water to the cornmeal mixture. (I put in 2 heaping teaspoons of yeast, but since this recipe makes 2 loaves, I should have added 4. My bread took a long time to rise as a result!) 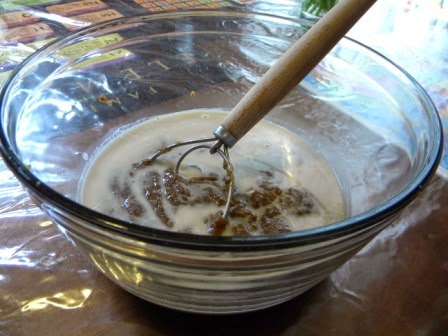 Add the flour and stir to make a stiff dough.
If you don't have a stand mixer, don't despair! One of the most useful, most essential non-electric tools if you make muffins or cookies or bread a lot is - the Danish whisk. You can buy one on Amazon for an inexpensive price and it is truly amazing how easy it makes mixing bread dough! And it mixes muffin batter like a dream without over-mixing. It's just awesome, alright? Okay, infomercial is over now! :-)
One thing I noticed is that this was a very moist dough. I added an extra 1 1/2 cups of flour during kneading and it was still sticky, even though the texture did become smooth. I decided it must be because of all the molasses and gave up when the texture was right, even if it was extra sticky.

Now, I cheated again and skipped the first rising. Feel free to follow the recipe, but I didn't want to wait!

You'll notice that one loaf is flatter than the other. I have to include silly mistakes, because I want people to realize that all is not always perfect in the blogging world (which is okay!) even if it appears that way. So, my silly mistake was that I covered both loaves with a baking cloth to rise. I decided I needed to spritz the towel with water to keep the loaves moist. Well, when I was pulling it away, the cloth stuck to one of the loaves and deflated the top! I was really bummed, but we ate that one first and it was of course just as delicious as the prettier-looking one. Next time, I'll just leave well enough alone.

Here's the recipe for this delicious bread! It's got a wonderful crumb and very pleasant, springy texture. 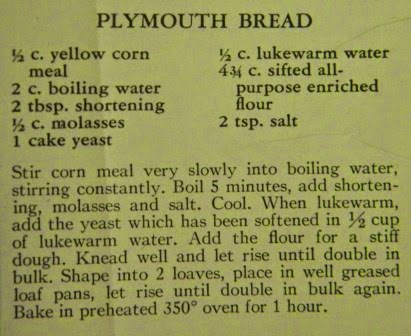