- June 07, 2014
Lately, I realized that I’ve been making a lot of American rationing recipes, so I thought I’d show the Brits some love and take this week’s recipe from Victory Cookbook by Margeurite Patten.

I decided on Almond Flan amongst the many British recipes I have bookmarked. I’ve always wanted to make a flan, but just by looking at the ingredients I knew it wasn’t going to be anything like those rich, creamy custardy flans I've had at Mexican restaurants. In fact, I was surprised to find out that all flans are not created equal (as found on wikipedia... *sigh*) :

Flan is an open pastry or sponge cake containing a sweet or savoury filling. A typical flan of this sort is round, with shortcrust pastry. It is similar to a custard tart or a South African melktert.[1]
British savoury flans may have diverged from the Spanish and French custard flans (also known as crème caramel) in the Middle Ages.
How interesting! I had no idea. :-)

One thing I've noticed in the differences between British and American ration recipes is that the British recipes are definitely based off a smaller variety of staples. This would make sense with it being a smaller body of land and that it’s an island at the mercy of what it could import. Once imports were cut off, they had to live off what they grew. This would lead to much plainer food staples. I realize that the culture is different as well and I think traditional British food is plainer in nature to begin with. But I have found that I don’t have to go out and buy ingredients for the British recipes nearly as much as the American ones. Just an interesting comparison. Making this flan put me in mind of this as its ingredients are fairly simple, but the dish itself is quite delicious and satisfying.

The recipe calls for semolina and through research I learned that semolina is usually made from wheat, but it is sometimes made from corn (think grits). Semolina can also be ground finer to make flour for making breads or pastas too. I didn’t have any wheat semolina, so I used a coarse cornmeal instead.

Before I even started I had to go and measure everything as the recipe only had the ingredients by weight. I'm always happy to use my vintage postal scale! I penciled in the measured amounts for you in the recipe below, but you'll have to keep in mind that it is fairly humid here and had rained the day before. So, my flour was probably heavier than normal and therefore I needed less of it. I don't think the differences are huge enough to make a difference, but I felt I should mention it.


The recipe starts out with making the pie crust - basic flour, salt, shortening, and water with the interesting addition of baking powder.

Once the pie crust dough was made, rolled, and put into a pie plate, I spread jam on the bottom – in my case I used raspberry jam, but you can use whatever jam you have on hand. I think apricot or blackberry would be nice too.

Next I made the filling using the reconstituted egg, semolina, flour, almond extract, and milk/water combination. I love that they actually suggest that you can water down the milk. I do that all the time to stretch my milk further when using it in recipes! (Not to drink, though.)

After adding the dry ingredients and mixing well, I poured the filling into the raspberry-covered pie crust and set it in the 375ºF oven. The recipe says to set it at 350º and cook for 35 minutes, but I set it at 375º and cooked it for 20 because I had an appointment I had to get to. It actually baked quite well, though the crust was more done than I like.

Once we got back from our appointment, the flan had cooled nicely and the kids and I tried a slice. It was delicious! The flavors were distinct, but delicate. The semolina had risen to the top to make a sort of soft crust and the milk, eggs, and raspberry jam had mingled to make a nice custardy filling in the middle. And it wasn’t too sweet either. It’s just the sort of pie that would go perfectly with a milky cup of tea. Yum! My son had several helpings as did I and my husband. My daughter wasn’t a fan, but she’s rather picky anyway. I’d say it was a success!

Another wonderful thing about this dessert or tea time snack is that once cooled, the slices are very sturdy and can be eaten in your hand – something that would have been perfect for a lunch to take to your wartime job.

Give it a try and enjoy a lovely British wartime snack! 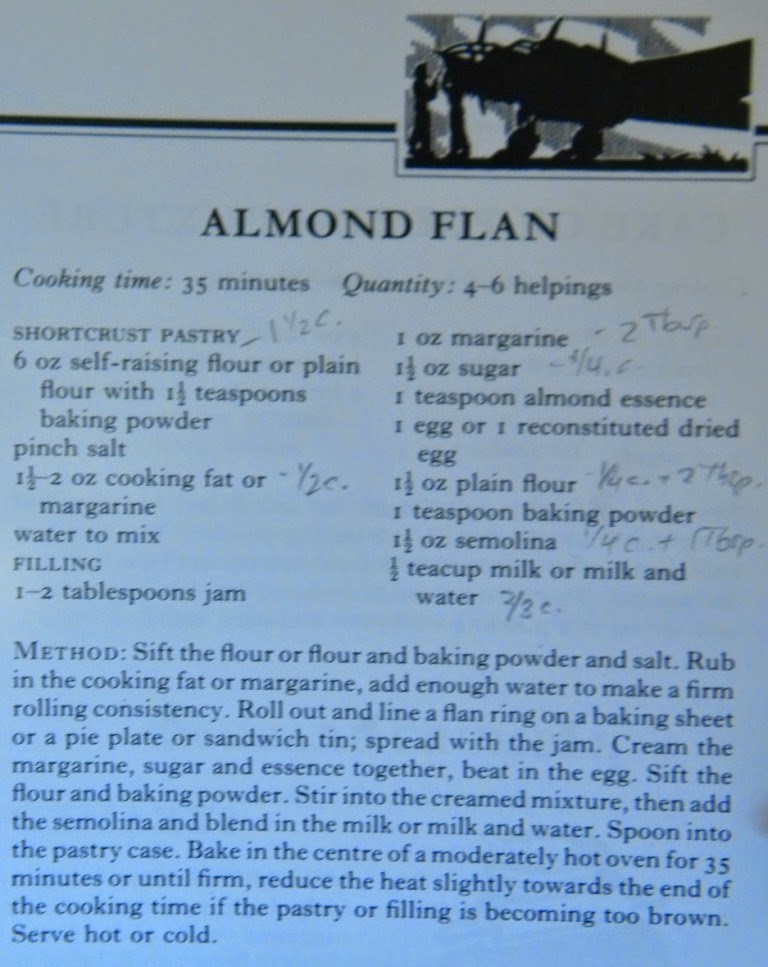