- June 12, 2014
I was excited to try a recipe from a new book I acquired recently. It's called Thrifty Cooking for Wartime by Alice B. Winn-Smith published in 1942. The premise of the cookbook is that the author was attempting to fill a void for simple, basic wartime recipes for real housewives. I love her preface, so I'm not going to paraphrase and just put it here:

"With the grim realities of war at our very shores it behooves all Americans to grit their teeth, tighten their belts, and wade into the unpleasant job of cleaning up the mess. In doing this everyone must have a part; and the one to be played by American housewives in their own kitchens is no less important than that of the worker in the munitions plant or the soldier advancing with the tanks. But in order to do her part the housewife, like the soldier, needs a new set of rules.

"This book, therefore, is an attempt to set down in concrete and usable form some, though by no means all, of the new rules for wartime cooking. In reality they are not new rules but rather the best and thriftiest of the old ones. Many of the practical suggestions which are given date from previous wars. Some of them, no doubt, were used by those sturdy pioneers in the big old New England kitchens of the Revolutionary War days. One or two definitely have their origin, so far as it can be traced, in our great Civil War. And many of them were used during the First World War by thousands of American women.

"To make these rules for THRIFTY COOKING FOR WARTIME easy to use it seemed best not to create just another cookbook in the regular manner with hundreds of detailed recipes and specific menus. Instead it was planned to give just a few basic recipes in the various fields of cooking which are practical, economical, and easy to change; then, following each basic recipe, to offer a few 'thrifty changes' which will add unlimited variety and meet the emergency by using the foods that are on hand in the cupboard or most readily available in any local market. From these variations and suggestions any woman can adapt her menus to whatever conditions arise. And to the woman who has once started to use this 'basic recipe' principle of planning and preparing her wartime cooking hundreds of other ideas will constantly come.

"Then like the general on the field of battle, she can follow and apply the rules of the game effectively, to help win this war and make VICTORY - the victory of justice for all - ours."

Isn't that fabulous?! I like the way this woman thinks about food. And it is a totally different take from the Westinghouse Meal Planning Guides. I love how she makes reference to the other wars experienced by Americans and draws out the patriotic and important duty of housewives in the current war of the 40s. I think it's also interesting how she seems to reflect the attitude of the Americans "having to clean up the mess". It's rather shocking in a way to read it straight out like that, but I'm sure many Americans thought that at the time, and in some ways I think that mindset still exists today.

As for the thrifty recipe, I had just bought a pork shoulder, so I wanted to attempt to make a roast of some kind. I have very little experience with roasts and thought I could learn a thing or two from Ms. Winn-Smith. For pork roasts she has you follow the basic beef roast recipe and then suggests some additions for the pork. This time I'm posting the recipe at the beginning so you can get a sense of her style. Just click on the pictures to enlarge them.

For the thrifty changes to my pork roast recipe, I decided to add the garlic, onion, apples, and raisins. 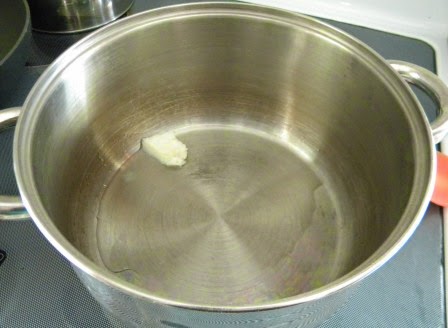 First I melted lard in a pot. 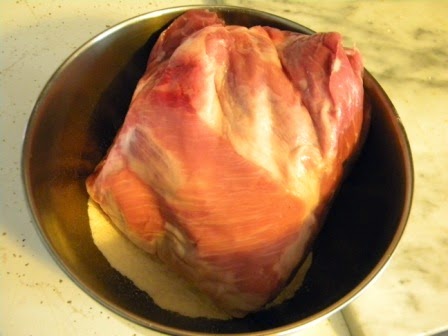 Then I coated the ham shoulder in a dusting of flour. 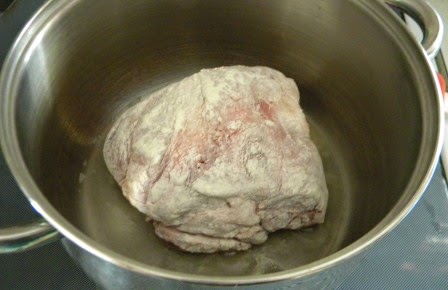 Then I put it in the pot and cooked it on all sides until golden. I also salted and peppered it. I'm always shy about salting meat I can't taste while it's raw, so I didn't end up putting enough on. 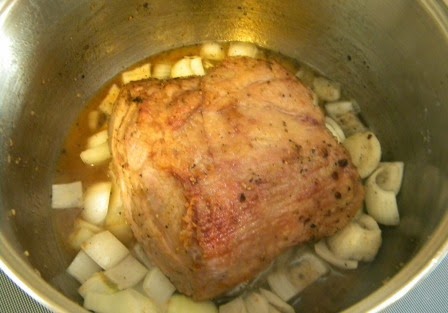 I added the onions and then the water. 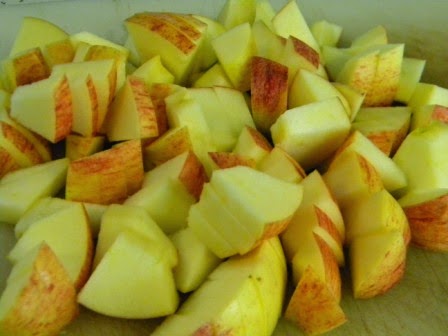 Next I added the apples and raisins. 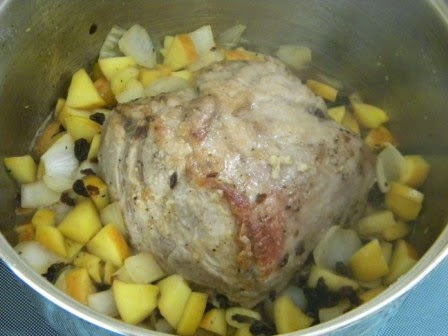 It looked and smelled wonderful! I let it simmer for about 2 hours. I think a crock pot would have served just as well! 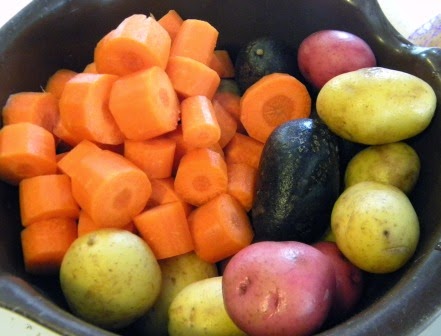 The directions say that an hour before the pork is finished cooking, you may add potatoes or root veggies to the pot, so I put in cut up carrots and new potatoes - yellow, red, and purple! Isn't it fun?


I did attempt to make the gravy from her directions, but it didn't turn out very well at all. It didn't thicken and it seemed too watered down. Maybe 2 cups of water was too much? Gravy from drippings is something I don't excel at just yet. I'll need to try it again. I kept the gravy and think I might simmer it down for a long time.

The pork and veg tasted wonderful though! I was downright proud of my cute little pork roast. :-) A big thanks to Ms. Winn-Smith and her tasty recipe!
1940s 20th century cookbooks food Project 52 rationing recipes WWII