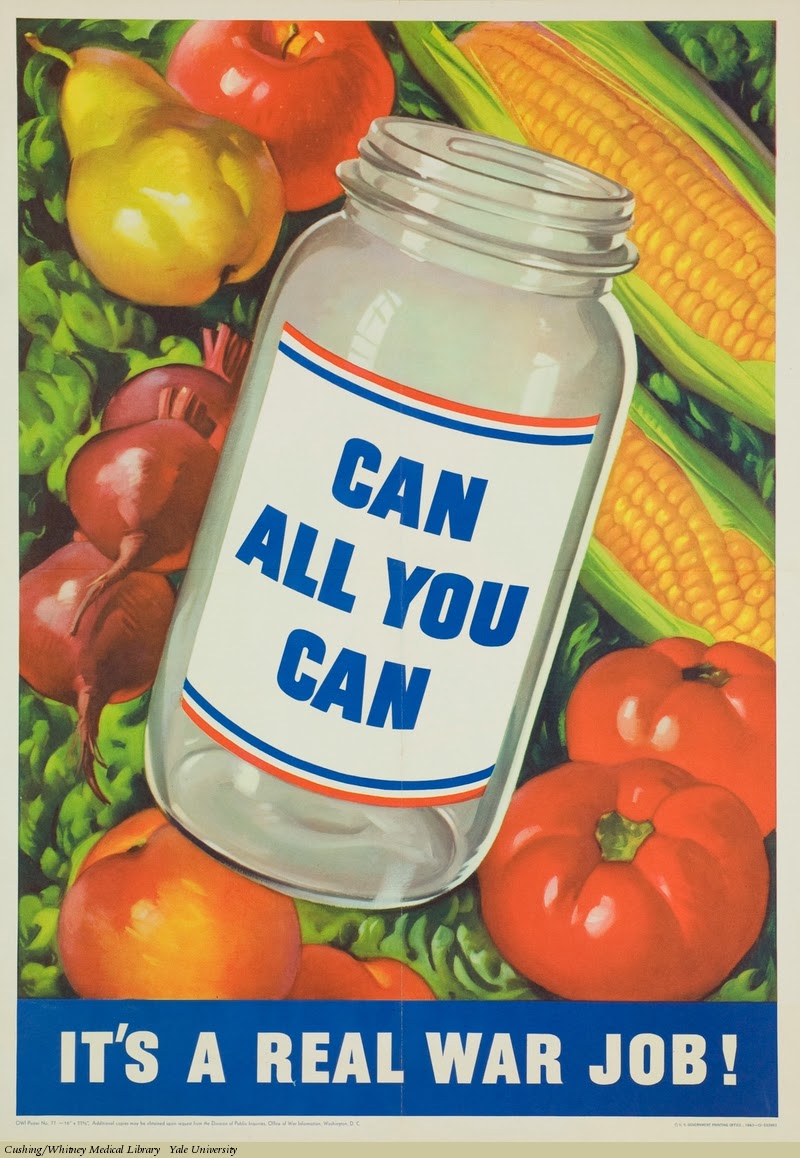 I've been dying to try this ration recipe for Beet Relish ever since my friend Lori gave me a jar to try. I was a little skeptical of beet relish at first. I like beets pretty well, but I'm a die hard dill pickle relish fan. When it comes to condiments I have a hard time branching out. But as it was a ration recipe, I thought I'd at least try it. So, my husband and I tried the gorgeously ruby relish on some good hot dogs. Oh my goodness. It was amazing! Sweet, tangy, earthy. Needless to say, that jar didn't last very long and then I was left dreaming about it, wishing I had some more!

Well, when young beets started coming into season I knew the time had finally come. Hooray! The ladies at the farm where I shop asked what all the beets were for and when I told them, their interest was really peaked, so I promised I'd bring them a jar.

Canning is quite the production, especially in my small, oddly-shaped kitchen, so once I worked up the nerve I just had to go for it. Of course I had to do the canning on the hottest and most humid day of the week in our non-air-conditioned farmhouse, but hey! I got it done!

Home canning of produce was strongly encouraged during WWII. Canning food from your victory garden was a way to save on ration points since store-bought canned fruits and vegetables were expensive as a result of wartime shortages. Canning your own produce meant you spent absolutely none of your ration points for food you could eat all winter long. It was a thrifty idea, except for one thing. Canning equipment was in short supply because of rationed metal. Neighbors and community organizations were encouraged to share their equipment to enable everyone to be able to can their produce. Dehydrating and freezing were also viable means of preserving victory garden harvests, but freezing was limited to those who were within a reasonable distance of a quick freeze locker - a building designed specifically for keeping the community's frozen meats and produce. (This was in the days before our gigantic freezer/fridge combos we use at home today.)* 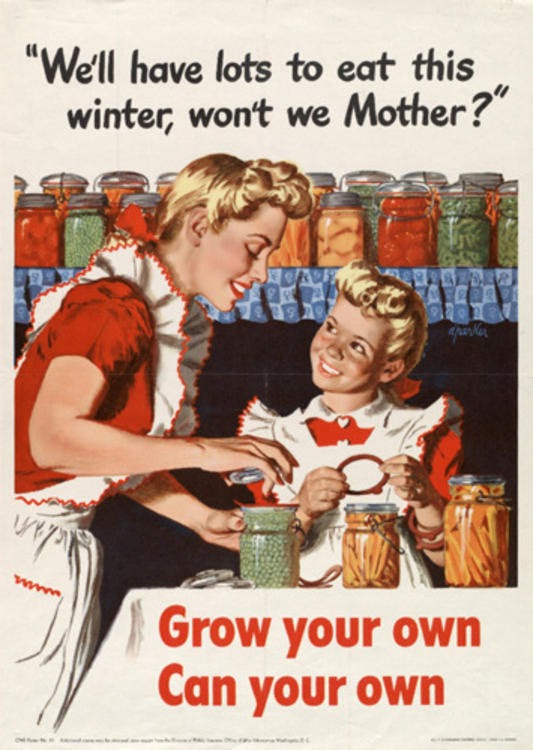 The recipe I'm using today has been modified for modern canning. A word of caution: Making most ration recipes poses no risk, however I strongly recommend that you do not can food using an original 1940s recipe, or any canning recipe prior to the 1990s for that matter. The science of canning food has progressed and changed over the years and what may have been deemed safe in 1943 (or even by Grandma who swears no one ever died from eating her canned food - sorry Grandma!) may have since been discovered as not being safe at all. So, if you want to try canning, I'd really recommend visiting Ball's canning website or buying a Ball Blue Book to learn more. (There are also lots of other great, modern canning recipe books out there including Put 'Em Up by Sherri Brooks Vinton, The Big Book of Preserving the Harvest by Carol W. Costenbader, and The Complete Book of Small Batch Preserving by Ellie Topp and Margaret Howard.)

Okay, on to the ration recipe!

The recipe is actually pretty simple, it's just time consuming. Put on a good historical drama or have a friend help and you'll be good to go. Expect at least about 4 hours of your day to be taken up by this one recipe. It'll be worth it though!

I hope you can appreciate how long it took me to dice all of these vegetables by hand! I think it was about 1 1/2 episodes of watching "The Paradise" on Netflix. Not a bad show, by the way, even if the ending was a bit ambiguous. 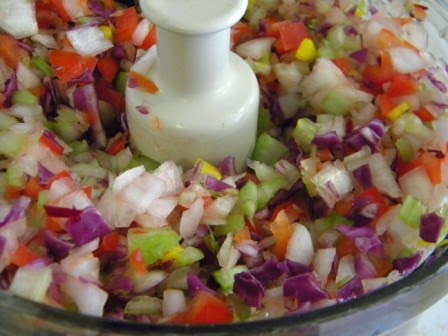 The diced veg still seemed too big to me, so I pulsed it in the food processor until I got the pieces the size I wanted. 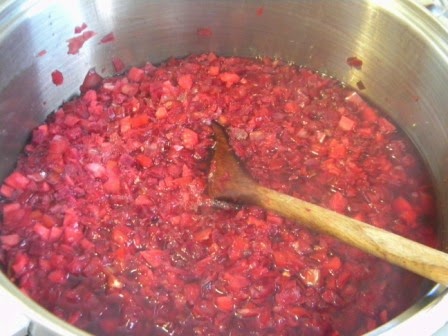 After 20 minutes or so, it's all cooked! You can see that everything has been dyed red from the beets. They're what give the relish that gorgeous ruby color.

Now I just have to go out and get some hot dogs...

This beautiful relish makes a good accompaniment to meat loaves and main-dish casseroles. It's also good on sandwiches or as a salad dressing on assorted greens. (It also tastes awesome on hot dogs!)

Makes about 5 pints or 10 half pints.
Recipe from Grandma's Wartime Kitchen by Joanne Lamb