- July 03, 2014
I'm not sure what got me in the mood to sew again. Maybe it was haunting Sensibility.com's Sewing Forum for a couple days. Maybe it was thinking about finishing up that tumbling blocks quilt in honor of my husband's and my 10 year anniversary. I started it when we got engaged. (Yikes!) Well, whatever the reason, I've started sewing again. I seem to go in phases with my hobbies and I was worried that I haven't sewn in a long time. I have a huge stack of sewing to do for historical costumes and a quilt or two, it's really not funny.

I started working on this 1940s "Swing" dress by Sensibility Patterns a few months ago, but after a very confusing 3rd step I stopped. Picking it up again, step 3 was just as confusing! After begging for help on the sewing forum, throwing my fabric around in a huff, saying a few prayers of desperation, and even talking to my engineering husband about it - I finally figured it out! I think all of those steps helped, but once I got over that hurdle I finished the dress mock-up in no time. Phew! Why did it have to be so painful? It's not really that difficult of a pattern. Silly me! At least it wasn't like those trouser pockets that I had to rip out 3 or 4 times EACH. Yeah, this was not as bad. :-)

Here's the mock-up in white muslin and it's missing the sleeves. I made the silly mistake of cutting out the sleeves wrong, so I just skipped it since I'm fairly confident with sleeves. 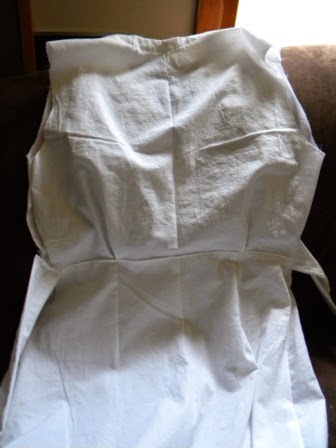 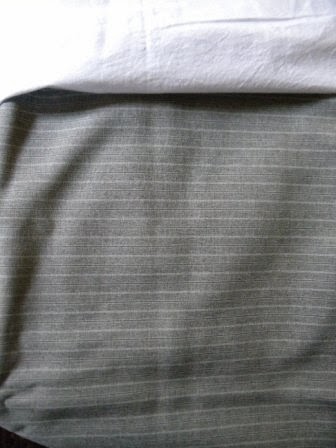 Here is the fabric I'm going to be making the actual dress from. It's a dove-gray pinstripe rayon suiting. It's such a pretty color and I really could pair it with a lot of different colors since it's a nice cool neutral! I thought it would look nice with red. I think one of my 1940s hats is red.

I haven't worked with rayon before, but I wanted to purposely buy a rayon since it was available during the war as an alternative to the less available natural fibers.

So, I've got the gray fabric pieces cut out in chunks - I haven't gone back to cut out the pieces to my size yet. That's the next step. Woohoo!
costumes sewing WWII