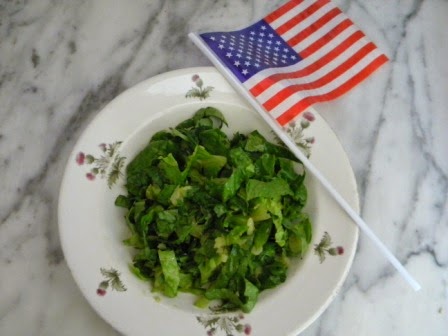 This week marks the half-way point of my project! I can't believe I'm halfway done. My family and I have tasted some fabulous and some not so fabulous ration recipes from WWII. Along the way I have been learning more and more about rationing during wartime and I feel my depth of understanding is growing. It has been such fun so far!

I've been contemplating about what recipe to do for this 4th of July week. In my searches for "patriotic" ration recipes I kept finding pretty much what we still eat today - fried chicken, potato salad, salads in general, and patriotic-shaped or colored desserts. Star-shaped cookies didn't sound like fun, and the fried chicken recipe I found didn't really peak my interest, but a salad recipe did.

Now, if you're on the hunt for a new salad to try, look no further than the 1940s, my friend! Since getting in your dose of veg for the day was really stressed during the war, it is easy to find dozens upon dozens of recipes for salads - some normal by today's standards, but also many other strange and interesting ones like today's recipe for Pineapple Toss Salad.

What's great about today's recipe if we're looking at it through the lens of rationing?
1. It uses canned fruit.
2. It's got vegetables!
3. It's fast and easy.

Why did this recipe peak my interest? It's a tossed salad with pineapple, green peppers, lettuce, and homemade French dressing! I've never had a salad like this, much less heard of one. Not to mention I was looking for something special for our 4th of July meal, so this was it! 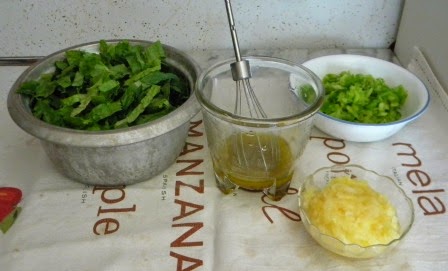 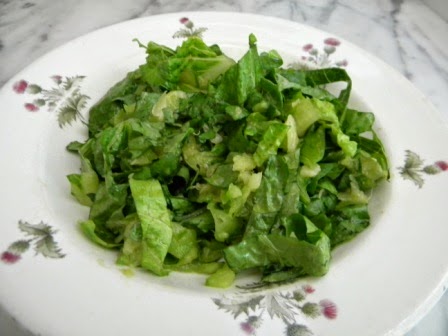 How did it taste? Wonderful! It is such a lovely, bright salad - the pineapple and peppers contrasted nicely with the salad dressing. I was really impressed with the French dressing recipe too. I usually despise store-bought French dressing because it's so sickly sweet, but this one tasted very nice and was so easy to make. Also, I had no idea that French dressing is red from paprika. Huh!

All in all, my husband and I both enjoyed the recipe a lot. It's meant to serve five, but it served one bowl for me and maybe three for my husband with a bit left over. (Our kids aren't salad eaters yet, but I did get my son to try a bit because it was our "ration recipe". Such a brave soul! Haha!)