- August 01, 2014
The minute I saw this drink recipe for Mint Tinkle in Grandma's Wartime Kitchen by Joanne Lamb Hayes, I had to try it! I'll admit it was mostly because of its funny name. Could you really offer this drink to some party guests with a straight face? Would you really be able to take yourself seriously while sipping on an icy cold glass of Mint Tinkle? I had to try it to find out; if anything to just experience Mint Tinkle!

This recipe calls for corn syrup. I usually avoid using corn syrup, but as it was a staple in wartime kitchens to help save on sugar ration points, and because the ginger ale called for in the recipe has corn syrup in it anyway, I thought I'd make an exception this time.

I really love that sugar was rationed during the war. Our society then and now were so dependent upon sugar, and wartime shortages forced them to go back to their roots from their grandparents' time when sugar wasn't so plentiful or affordable and to get creative. As for corn syrup, it wasn't born out of WWII. It had actually been around for quite some time. (See here for a history of Karo Corn Syrup.) However, it gave housewives another option besides honey or molasses. (Sweetened condensed milk was another interesting option.)

For some perspective, I found a cool little article about sugar rationing during the war published in Wisconsin in 1942:

This is a neat little British wartime rationing chart with the mention of sugar rationing. The British had a much harder time getting sugar than Americans. Many recipes from Britain use golden syrup which is similar to corn syrup.
Now, on to the recipe! The drink is simple and straight-forward. 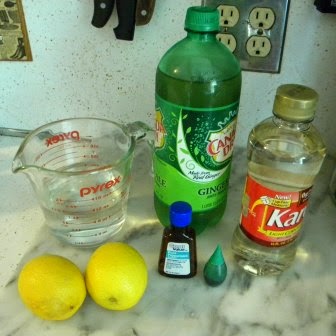 I was confused as to why you would need corn syrup for the recipe at all when you have the ginger ale to sweeten things, but because it calls for 1/2 cup of straight lemon juice it suddenly made sense! It's also nice to use fresh lemons so you get some of that pulp in the drink. 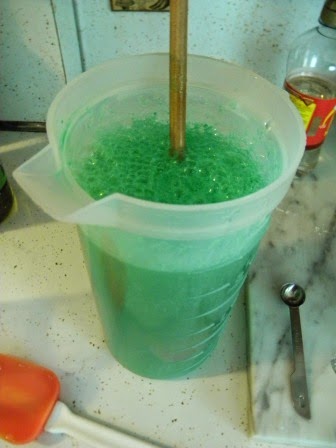 Pour into a glass and enjoy! (I only had mini ice cubes instead of crushed ice, but they obviously work just as well.)

I have to say that this is one seriously complex little drink! I am continually amazed by these wartime recipes.

I was a little concerned about mint with lemon juice and ginger ale - what a strange combination, right? Well at first sip you immediately get that awesome sour of the lemon with the bubbly spicy ginger ale and then at the very end you get this wonderful minty freshness. I was surprised that the lemon and ginger ale overpowered the mint so it wasn't apparent until I swallowed my mouthful. Such an interesting experience.

In two words: lovely! refreshing!   My whole family loved it, especially my kids. We pretty much drank the whole pitcherful that day.

Not only does this make a great summer time refresher, I think it would be highly appropriate for St. Patrick's Day or a party, of course. I would love to make this with ginger beer with extra ginger, but then again I love ginger. Ooh! And just imagine if you used this drink for a lime sherbet float? Yum!

I strongly encourage you to give this one a try. And then you can say that you've drunk the very enjoyable Mint Tinkle! Haha! :-)

(So keep in mind that you're making the drink syrup ahead of time and mixing it with the ginger ale and ice when you're getting ready to serve it.)
1940s 20th century cookbooks food Project 52 rationing recipes WWII