- August 08, 2014
Our garden is in the throes of harvest bounty - such as it is with my lackluster watering habits. If I had a serious Victory Garden, I couldn't afford to be so lazy in watering my plants or to not do succession planting - this would be our winter eating we're talking about! Gardening is something I love, but I am still learning to be better at it and to be more attentive.

Many times when we look back at our grandmothers we assume they all knew how to garden, can, and bake their whole lives because that is just what you did back then. But during my research I found that that was not always the case. Even some of our grandmothers and great-grandmothers had a steep learning curve. Wartime conditions asked women to do all sorts of things they'd never done before, including improving skills they had or learning entirely new skills of baking, canning, and gardening. Managing a small kitchen garden was not the same as managing your entire yard turned into a garden - imagine processing all that produce yourself! Countless classes and workshops were offered during the war to support the homemaker in the monumental task of keeping their homes and the homefront running.

As for the ration recipe -  I was trying to find a ration recipe this week that used what I had on hand and was happy to find an interesting little salad called Beet & Onion Salad. I had just picked some beets from the garden and we had recently pulled out all our onions to clean and cure. I even had a batch of boiled eggs in the fridge, so it was a perfect match as the recipe calls for beets, celery, a small onion, a boiled egg, and a recipe of the French dressing from the Pineapple Toss Salad I posted a few weeks back.

One interesting note - All the menu plans in the Westinghouse Health For Victory guides, like the one this recipe comes from, emphasize making as many meal components in advance as you could to save time for when you made dinner later. This week's recipe is a good example of that. The boiled egg and cooked beets require the biggest time commitment and can be done beforehand. (Cooking the beets, though, not cutting them.)

These days I've heard a lot of advice for making it easier to eat your veggies by encouraging you to cut veggies in advance and store them in the fridge for a quick snack. In the 1940s, though, cutting veggies in advance was a big no-no as they felt many valuable vitamins were lost as the veggies sat there. So, while many things could be made in advance, like the salad dressing or the dessert, cutting veggies was something you waited to do until you were actually preparing dinner. It's an interesting food preparation difference between then and now and I wonder who is more right?

With that question in mind, let's get on to this simple little recipe:

If you haven't pre-cooked the beets, wash them thoroughly, but do not cut off the stems or root tail. (This causes the flavor to leech into the water.) Boil the beets until tender all the way through. Run cold water over them; then cut off the ends and slip off the skins.

Meanwhile, chop the cup of celery and three tablespoons of onion. 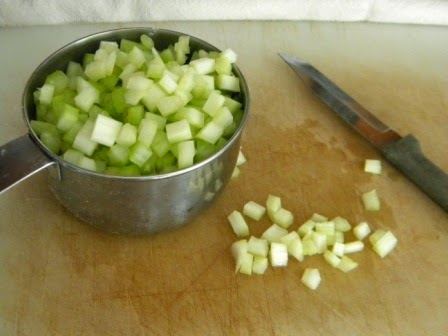 Dice the 2 cups of beets. 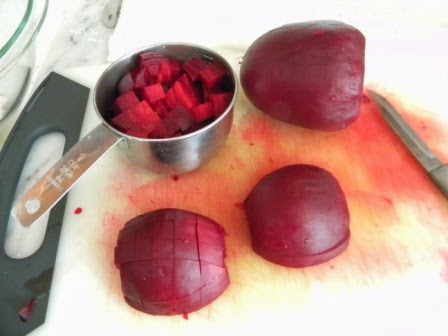 Combine all ingredients together.
Pour the dressing over the salad (you can use mayo instead if you wish), and stir to combine. 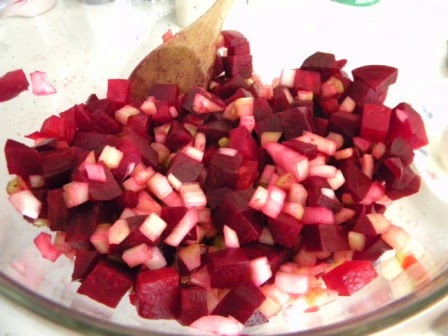 Put the servings of Beet & Onion Salad on a leaf of lettuce or a small salad. Peel, wash, and slice the boiled egg and add to the salad plates. 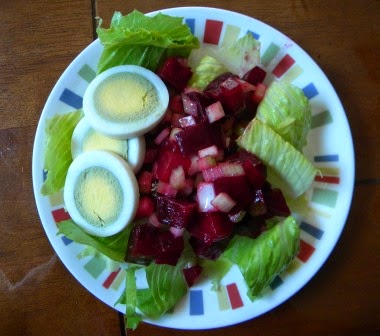 My husband and I love beets, so we really enjoyed this salad. The French dressing pairs well with the brightness of the celery and onions and the earthiness of the beets. I was a little wary of those boiled eggs on there. Even though I love boiled eggs I just didn't know if they went with beets.(Which is a bit silly since pickled eggs and beets are an old, classic combination.) I needn't have worried, though. They were delicious! It all worked well together and it was quite filling. Yum! Huzzah for another 1940s salad recipe! 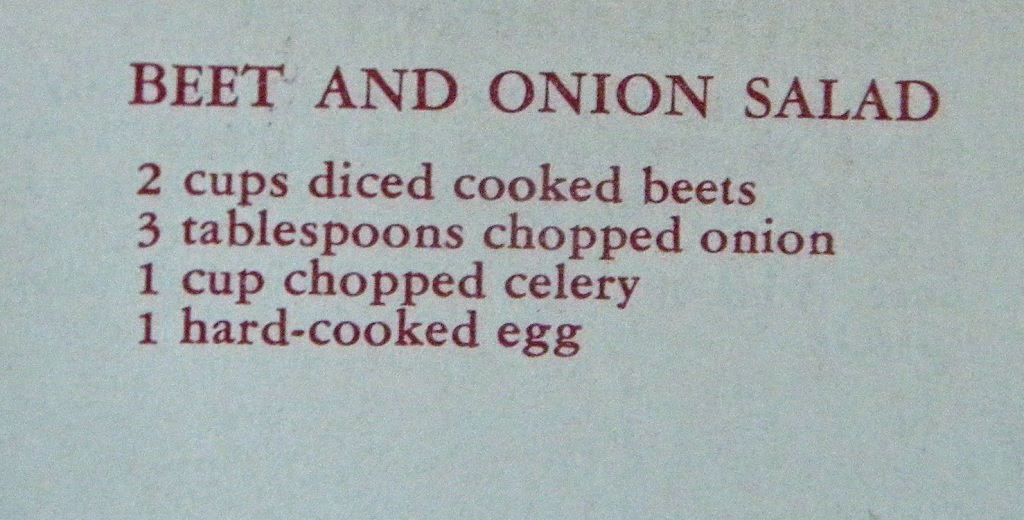 I just saw a recipe in the same book for "Sunshine Salad" and I want to try it, but am a little afraid. It's one of those Jello salad recipes... I shudder to think, but something inside me says I have to try it because it is so scary! haha!