- August 17, 2014
Ack! This is the first time I've been late in posting my ration recipe. Not bad for 32 weeks and not being late once until now, even while on vacation! (Yeah, that's pretty awesome, huh? haha!)
I did do the ration recipe, so I didn't technically miss. I do have excuses and because it's my blog I get to list them:
1. I'm working on a book right now and it sucked a lot of time this week. That's pretty exciting!
2. Did I mention that I'm a homeschooling mom? Yeah, we started school this week.
3. Procrastination. Mostly born out of the fact that this week's recipe was, in my opinion, a bust, and that's a little depressing.

Okay, enough of that. Here we go.

Remember the ration week for Knox Gelatine Spread? Well, this week I decided to give the spread a try in one of their recipes. I was worried about it going bad just sitting in my fridge and wanted to use it up in one go. I went back to the Knox Gelatine booklet and decided on Scones since they sounded interesting and it's been awhile since I've baked something for my ration recipe weeks.

A quick note about rationing, though. I was reading on the National WWII Museum's website about rationing and it struck me that I haven't discussed the reasons for rationing completely. I thought their website gave a great summary. I'm still learning about rationing so I was glad to find such a great, straightforward website that talks about it. Here's a quote from their site:

"Food was in short supply for a variety of reasons: much of the processed and canned foods was reserved for shipping overseas to our military and our Allies; transportation of fresh foods was limited due to gasoline and tire rationing and the priority of transporting soldiers and war supplies instead of food; imported foods, like coffee and sugar, was limited due to restrictions on importing.

"Because of these shortages, the U.S. government’s Office of Price Administration established a system of rationing that would more fairly distribute foods that were in short supply. Every American was issued a series of ration books during the war. The ration books contained removable stamps good for certain rationed items, like sugar, meat, cooking oil, and canned goods. A person could not buy a rationed item without also giving the grocer the right ration stamp. Once a person’s ration stamps were used up for a month, she couldn’t buy any more of that type of food. This meant planning meals carefully, being creative with menus, and not wasting food. More than 8,000 ration boards across the country administered the program."

So, in other words, you still had to pay for the food with money, but you also had to have the correct corresponding ration stamp. I love that they mentioned the limited use of gas and tire rationing as well as the priority in transporting soldiers and not food... It was just a totally different world back then. Interesting, isn't it?! Man, it makes me want to go back to being a girl and playing store, and we could use ration stamps as well as money. Wouldn't that be fun? :-)

Sift the dry ingredients together. (Only put in 2 tsp. of the sugar though and reserve the rest.) 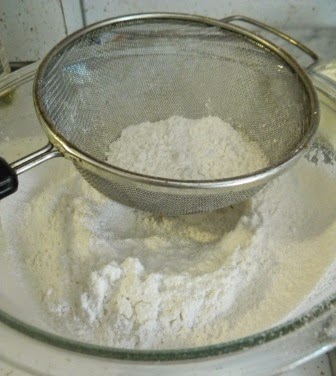 Cut in the Knox Gelatine spread until the mixture resembles coarse crumbs. 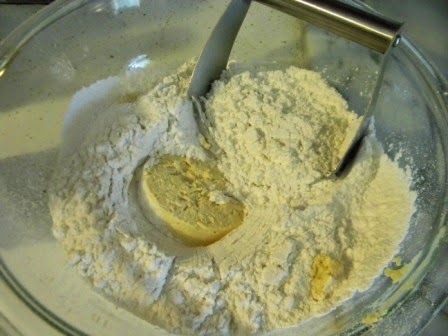 Separate one of the eggs and add the other egg to the yolk. 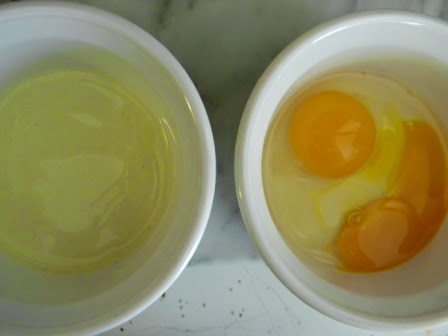 Add the egg + egg yolk and the milk to the flour mixture until it comes together to form a ragged dough. If there's still a lot of flour left, though, definitely add a little extra milk. 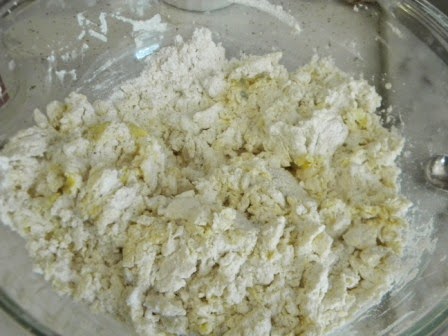 Now this is where the recipe wasn't clear. Normally with biscuits and the like, you'd knead the dough for a few strokes to get it to come together more, but with scones you definitely don't want to do that. Unfortunately, I did and they made my scones turn out tough. It wasn't until later that I remembered my experience making scones some years ago and you pretty much just patted the dough together to avoid kneading it at all. On top of that when you added the cream you mixed it gently by hand. Well, I tried to follow this ration recipe the best I could so... Oh well. 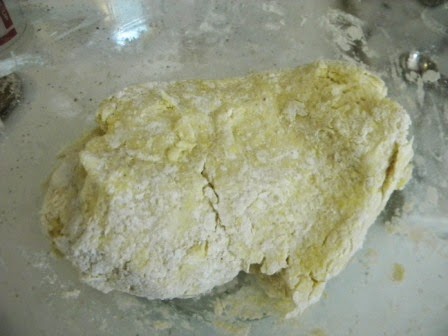 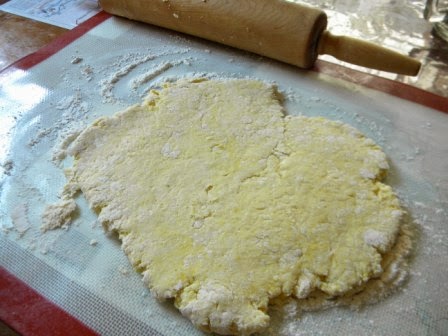 Cut dough into 3" squares and divide each square into two triangles. (I didn't measure, and just eye-balled it. So, I'm not sure if the portions are correct. The recipe didn't mention how many portions, so I wasn't as careful this time. 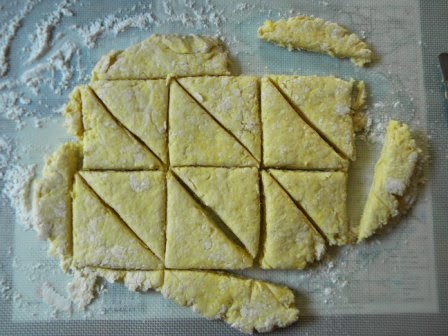 Put the triangles on a greased or parchment-lined cookie sheet. Brush on the egg white, then sprinkle on the reserved sugar. 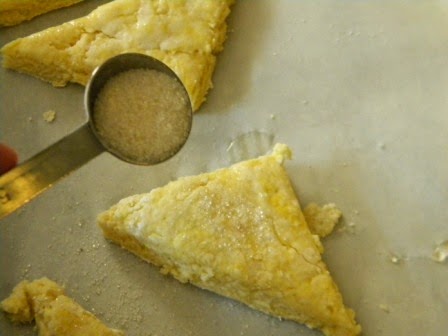 Bake at 450ºF for 10 minutes. Serve hot or serve the next day by cutting in half and sandwiching a spread between. 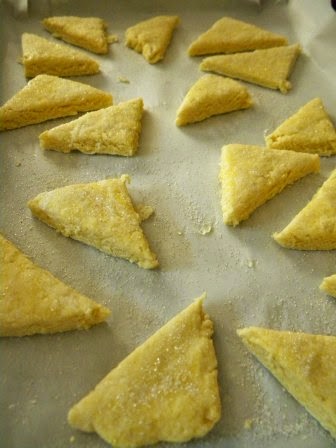 The booklet also had quite a few ideas for spreads using the Knox Gelatine Spread. So, for a bonus I thought I'd post some of those recipes too.

I opted for the orange marmalade and spread mixture since I had some marmalade to use up. 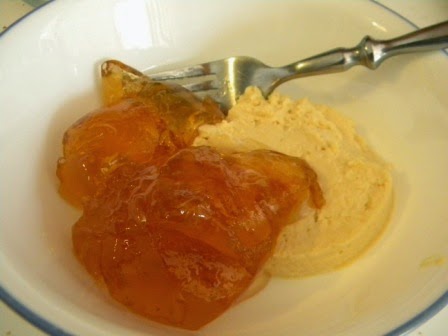 The recipe said to blend the two ingredients together. 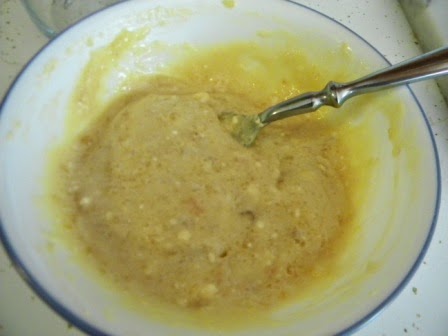 And then it said to warm it over a pot of water on the stove to get the gelatine to dissolve. This step confused me, but I did as it said. Then I put the mixture in the fridge and it never set up again. It's still soupy. That is so weird and frustrating! So if you make this with marmalade and plain butter, skip the warming part! 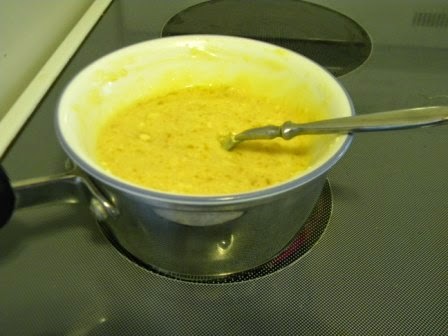 The scones were unfortunately not very tender. And the spread was soupy. So I was bummed about this week's recipe. It just didn't turn out. Not to mention I'm not fond of straight white flour recipes. I just think they taste pasty and lacks depth. Can you tell I grew up eating whole wheat bread? :-) 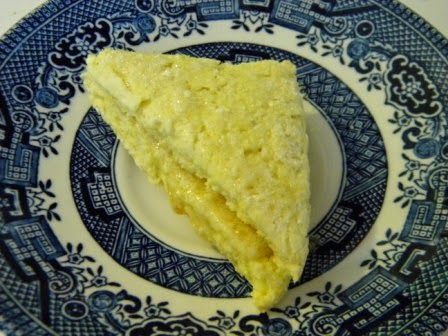 I guess now is as good a time as any to mention, too, that for health reasons I'm having to eat gluten-free. It looks like it might be a permanent change in my life and it was really depressing to face this change smack in the middle of this project. It was devastating, actually. I've been trying to be creative and choose ration recipes that don't involve flour, especially since I did a lot of baking recipes toward the beginning of this project. I decided to cheat a little this week, but it's just not fun for me when I can't (or am not suppose to try) the recipe I make! I thought I could get by with others being my proxy for eating, but that's no fun either and my family doesn't have the same palette as me and it's hard to comment on their experience. *sigh*

I'm still debating about approaching ration recipes involving flour with gluten-free flour and xanthan gum, but the historian in me is fighting against that idea. I have to think about it for awhile longer. So, I'm going to continue to be creative in this project. Finishing the project is the most important thing right now to me, so we'll see how it goes!

Here are the recipes: