- August 23, 2014
This week I wanted to look into the less common, non-rationed sources of protein encouraged by the government to use during wartime. Fish is a big one.
I've always liked this U.S. Food Administration poster from WWI. It makes a very good point - cows, pigs, and chickens all needed to be fed and cared for while fish took care of themselves. They used no resources that people could also use. It was wise for the government to encourage people to eat self-sustaining fish.

World War II was no different. Even more than before, the country's resources needed to be used in the most efficient way possible and fish was still an excellent self-sustaining protein.
Here's a poster from WWII encouraging the catching and use of fish as a wartime staple.

Rabbits were a great protein choice too since you could feed them off scraps, they reproduced quickly, and their protein is the densest by ratio of how much food they consume - much better than cows or pigs. I had never seen any wartime posters encouraging the raising of rabbits for meat, though. So then I just did a search and look at what I found!
Horse meat was even used. Even though automobile use was hampered by the rationing of gasoline during the war, the advance of the car and truck continued to overtake many jobs previously done by horses. So what else can you do with a surplus of horses?...
I can't even imagine what horse would taste like. Is it much like beef, I wonder, since they eat similar things?
Check out this photo:

I chose this week's ration recipe for Fish Bake from the British Victory Cookbook by Margeurite Patten. I didn't have rabbit or horse on hand, but I did have a large haddock I purchased mostly out of surprise that I found it. Haddock is a very difficult fish to find in the states for some reason.

When I was in Scotland I had the most amazing soup called Cullen Skink that was made with haddock, a common fish for over there. I always wanted to try making Cullen Skink, but I never got around to it because I wanted to make it with haddock which I could never find. I finally got the haddock, but still didn't get around to making the soup. (Sad isn't it?) Since I had the fish and I haven't tried a fish-based ration dish yet I thought I'd give it a try this week.

Fish Bake is a typical, simple-fare British dish. Fish, potatoes, onions, parsley, milk, and salt & pepper. That's it! It's one of those recipes where you could bake the fish in advance and make the casserole later, which is pretty convenient.

Grate the onions and potatoes (keep the peels on the potatoes). Chop the parsley. Put a layer of potatoes in the bottom of a greased casserole dish. Season well with salt and pepper. Layer in the onions, parsley, and then a layer of fish. Repeat layers, ending with potato.


Cover with a greased paper or even aluminium foil. Bake in a moderately hot oven (375ºF) for 30 minutes. 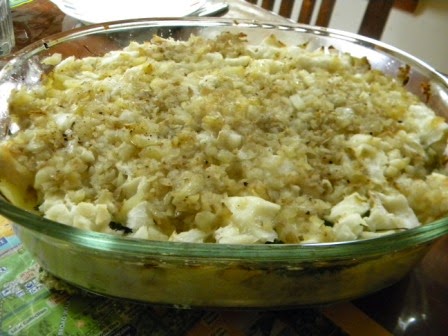 This recipe was pretty good! I don't know if I seasoned it enough, though. I'm always shy with salt because I'm afraid I'll over salt things. So, it was a little bland, though filling and hearty.

Our family is used to eating fish with my homemade tartar sauce, and so we tried it with that on there and I thought it improved the flavor a bit more. I just feel it needed something acidic like lemon juice or malted vinegar.

Overall, it's a nice light casserole for a summer dinner. It would be easy to include other vegetables or herbs that you have on hand, grated/chopped and added in with the onions. The recipe is a fairly blank canvas for creativity!