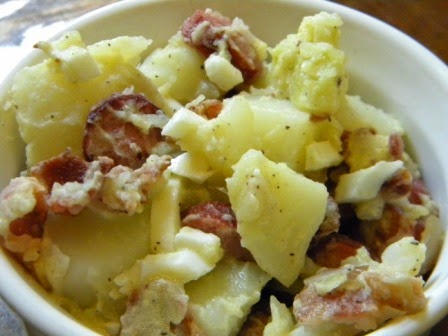 I wanted to pick a special, but familiar recipe for the holiday week and was happy to find this interesting 1940s take on potato salad for Hot Potato Salad and Frankfurters. It really should be called Hot Potato Salad with Frankfurters, Bacon, and Boiled Egg. I love that this recipe is so protein heavy since I'm not a fan of a lot of potato salads out there. This one, though, is almost a main dish unto itself.      One thing that I found interesting is that the recipe has you boil the potatoes and then peel them. I've always peeled my potatoes first. And while the Brits wouldn't approve of jacket-less potatoes, boiling them actually helps save on potato. Peelers removes some of the potato meat, but boiling and then peeling using a thin paring knife to lift the skin off, makes the skins only peel off paper thin - no potato meat included. Pretty nifty!

For this recipe you need 5 medium potatoes, 4 frankfurters, 8 slices bacon, and 2 boiled eggs along with the other odds and ends you see below:

Boil the scrubbed potatoes in water until tender all the way through. In the mean time fry the bacon which you cut into 2 inch pieces. 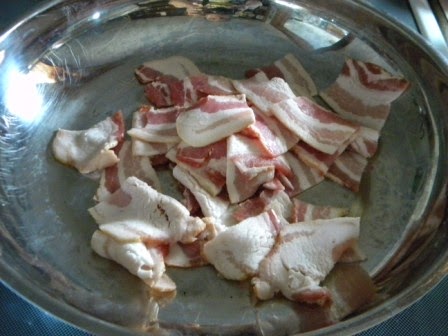 Slice the hot dogs and mince 3 Tbsp. of onion. Set aside. 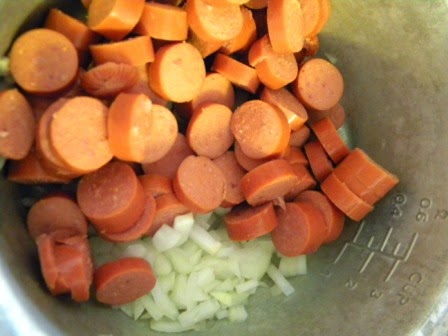 Once the bacon is crispy, remove to drain on a paper towel and pour off half the bacon fat.

Cook the hot dog pieces and minced onion in the bacon fat until nicely browned. You'll probably need to drain off all the extra fat so your potato salad isn't greasy. I had to do that. 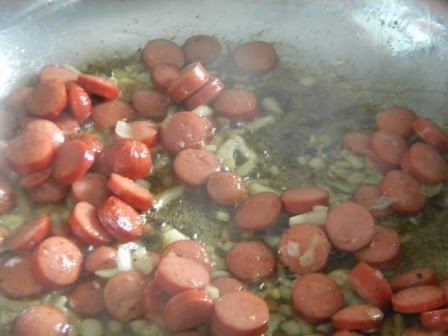 Once the potatoes have cooled a little, peel the skins off. Then dice the potatoes. Add to the hot dog and onion mixture. Mince the boiled egg and add it in. Stir in the salt, pepper, and vinegar. Mix until well combined. 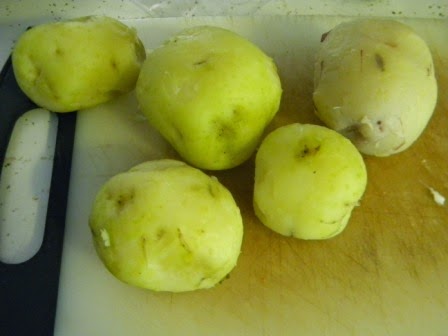 The recipe has you heat the potato salad over the stove top until all the ingredients are heated through. I just skipped this step and went straight to eating it, because I really couldn't wait. 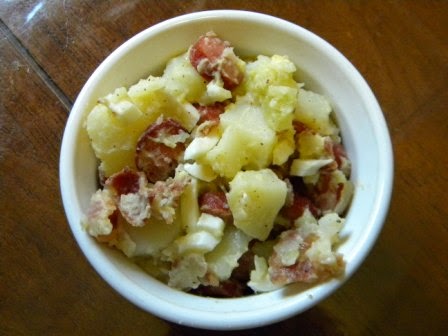 Oh, this hot potato salad was so good! It was really tangy from the vinegar. I might have liked a little bit less, but it was still really good. All the protein in there from the meats and the egg really hit the spot. It was awesome. And the bacon had a really good crunch, even when it was cold. (I ate it both ways - fabulous!)

This recipe is a winner. You might like to make it for the next pot luck or holiday party. You won't find this one at your grocery store deli, that's for sure!

P.S. Sorry, just an hour late on posting this for week 35! I'll have another recipe for this week coming soon.

Update August 27, 2015 - I made this for a pot luck and it was immensely popular! That made me so happy (hooray for ration recipes!), and I wanted to pass it on. You might like to bring it to your own pot luck.
20th century cookbooks food Project 52 rationing recipes WWII