- September 10, 2014
Some weeks I need something super fast and super easy to do for this ration project. This week was one of those. My dinner-time creativity is scraping bottom, so it's been a struggle lately. I was glad I remembered this recipe I had seen in the July 1943 issue of the Westinghoue Health-for-Victory booklet. It was a winning recipe tip sent in by a reader:

I didn't have unexpected company, but I needed a time saver, and this recipe was so simple!

So, while I waited for my husband to come home I made up the biscuit dough. I've mentioned on here before that I've had to switch to a gluten-free diet for health reasons. I didn't want to miss out on this yummy-sounding recipe, so I used a ration biscuit recipe but substituted a gluten-free flour mix + some xanthan gum as a binder for the all-purpose flour. I was glad I used a ration biscuit recipe because I noticed an important difference between that recipe and my usual recipe - a 4 tablespoon fat difference. The ration recipe called for 4 Tbsp. shortening while my usual biscuit recipe calls for 1/2 cup (8 Tbsp.). I really love the less fat being used, just because sometimes I don't want to use a whole half cup of butter. It's kind of expensive! I was actually out of butter this time, so I used lard. Hooray!

Once the biscuit dough was mixed up I put it in the fridge and ran to the store almost as soon as my husband walked through the door and could be with the kids. (Aren't I clever! haha!) I picked up the soup she recommended - vegetable beef (thank you, Campbell's!), but had to settle for a gluten-free lentil vegetable soup for me. I imagine many soups would work as long as they didn't have noodles or a ton of rice in them.

I poured the 2 cans of soup into the casserole dish along with the needed water, stirred, then cut out the biscuits and laid them on top - just like you would with dumplings. I did the same with my soup. It was a bit thicker and didn't need water, but I added a little so it wouldn't dry out too much. (Lentil soup is more stew-ish to begin with.) 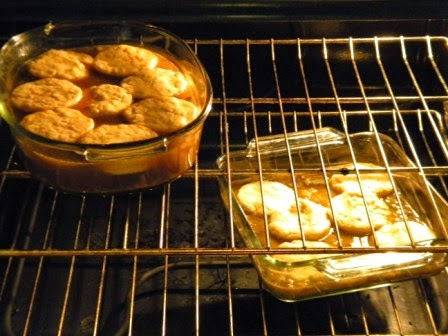 I think they turned out looking rather nice!

The soup was quite a success with husband and son. They loved it. My lentil version was very delicious too. Our 4-year old daughter is always suspicious of new things, but will sometimes try them. After some resistance she tried a biscuit I pulled off the top and ate the whole thing. She got a big high five. :-)

Kudos to Mrs. Whipp and her time-saving, ration-point saving, and unexpected company-saving dish!

Here is the biscuit recipe I used from the same July 1943 Westinghouse issue.

You might want to keep this one on file for when you have some unexpected company pop in or have a really busy night!
20th century cookbooks food Project 52 rationing recipes WWII