- September 19, 2014
I was very interested in this week's ration recipe for Molasses Lemon Pudding that I found in Grandma's Wartime Kitchen by Joanne Lamb Hayes. Initially I was interested because a pudding made with molasses and lemon sounded so bizarre I just had to try it! But then as I was making the recipe I realized that this was a pudding made without any milk whatsoever!

As for today, if you or someone you know has a milk intolerance like in my family, this pudding recipe is worth a look.

Ingredients for this ration recipe include sugar, cornstarch, salt, molasses, water, lemon juice, lemon peel, butter, and eggs. On another note - a whisk is a must for this recipe! 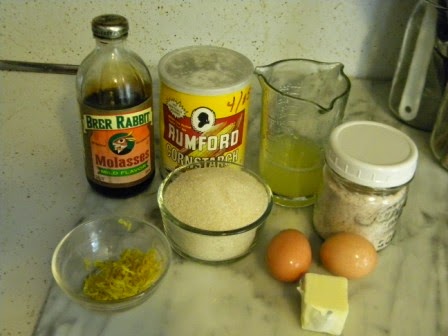 In a double boiler (or a metal or glass bowl set over a pot of water) combine the sugar, salt, and cornstarch with a whisk, then add the cold water, boiling water, and molasses. Whisk to combine and heat over hot (boiling) water until it thickens. I found that I had to whisk it frequently as the cornstarch would thicken at the bottom, but not on the top and it was getting clumpy.


Remove from heat and fold in the lemon juice, butter, and lemon peel.

Dish out into individual dishes and serve hot.

Well, folks, let me tell you that this recipe totally took me by surprise! I tasted the pudding before I added the lemon and the molasses flavor was very distinct. I wasn't a total fan. But after adding the lemon, the taste was transformed! This pudding was amazingly yummy. The lemon was the most dominant flavor while the molasses had become a complex background note. I really loved it hot. I did put it into the fridge to chill to see the difference. Once it becomes cold the lemon is more subdued and the molasses is more pronounced. Eating it hot, in my opinion, is the way to go.

The texture was nice and smooth, but the key to that was definitely all that whisking. The downside of using cornstarch, I suppose.

This is definitely not your typical pudding recipe, but I'd say it's definitely worth a try!

Combine sugar, cornstarch, cold water, and salt in the top of a double boiler. Stir in boiling water and molasses. Cook over hot water until thick. Beat eggs until very light. Gradually stir in some of pudding; return mixture to remaining pudding in top of double boiler and cook until very thick. Fold in lemon juice, butter, and lemon peel. Divide into dessert dishes.