- September 24, 2014
It had been awhile since I'd pulled a recipe from my Thifty Cooking for Wartime cookbook by Alice B. Winn-Smith. I guess I haven't used her book as much as I thought I would because so many of her recipes are practical, familiar, and not that crazy. I'll admit the crazy recipes tend to grab me more just because they're so strange and interesting.

However, I have been really falling in love with Thrifty Cooking for Wartime just as a cookbook itself. Her recipes really are so practical and flexible. And that's the whole point of the book.

I love her take on what realistic wartime cooking should look like. Just like today in modern times, they didn't always have every single ingredient a recipe called for. She was advocating using what you had on hand without feeling the need to run to the store for just one or two ingredients that may or may not be in stock.

Since fall has arrived alarmingly on time out here in Maryland, I felt like I needed to make some cornbread to go along with all those lovely soups that are so comforting on chilly nights (or mornings!).

Ms. Winn-Smith had a pretty basic cornbread recipe with very interesting "Thrifty Changes". I loved the idea of cornbread with bacon and cornbread with fruit! She recommends peaches or apricots, but I opted for apples which are really coming into season now. She also mentions that you can change out the sugar for honey or syrup (which I took to be maple syrup), and you can use either sweet milk or sour and tells you how to change the leavening if you do.

I love how she just makes you feel so independent and confident as a cook! :-)

First you sift all the dry ingredients. The dry sugar would go in at this step. Oh yeah, and you should grease a shallow baking pan too. I always forget to do that at the beginning. 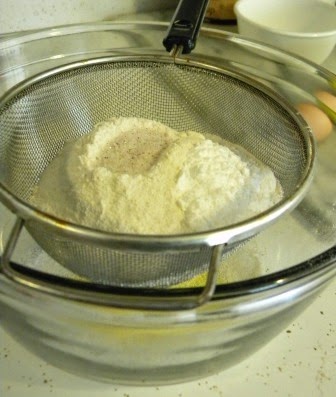 Next you pour in the milk, maple syrup or honey (if you're not using dry sugar), melted shortening, and the egg. Stir until well combined. I noticed my batter was really thick. I'm used to a cornbread batter consistency more like pancake batter. If you like it looser I suppose you could add a little more milk. 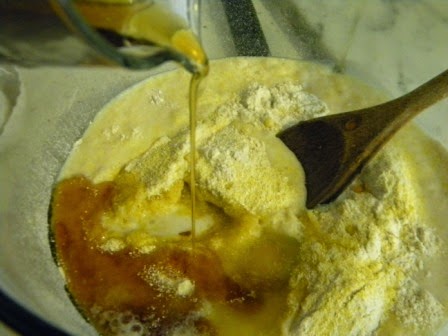 I chopped up my apples and bacon. 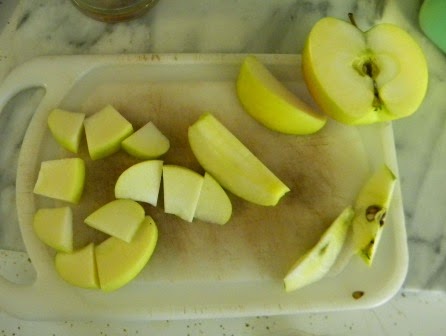 This is where I got creative. I only wanted to make one recipe for cornbread, but wanted to try both bacon and apple - but not together, though that would have been tasty! Since the batter was so thick, it was easy to put half in with a piece of parchment paper separating the sections. I put the bacon over the top of one. Then I stirred the apples into the remaining batter and put it on the other side.

Bake in an oven preheated to 425º F for 20-25 minutes. The directions for the bacon version said to put it on broil for the last couple minutes to really crisp up the bacon. I did that, but covered the apple half with foil to keep it from over-browning.


I couldn't wait to try it. Both version were quite good! The cornbread itself was sweet and a bit on the denser side, but not in a bad way. It was hardy, I guess you could say.

If I had been thinking, I would have shoved a layer of bacon down into the batter and then layered more on top, because it really needed more bacon. I was worried all that fat would make it weird on top, but that wasn't really a problem. The bacon flavor with the cornbread was awesome. And, seriously, who doesn't need more bacon??

The apple one was nice. My son thought it tasted a little like apple pie. I agreed, though it could have done with some cinnamon and of course more apples. I was a little shy on the add-ins. :-/

Also, I think whole wheat flour always improves a cornbread recipe. If I could eat it I would totally have used it. Oh well! I'll definitely be making this cornbread again with a few tweaks - and more bacon!

Once again, my hat goes off to you Ms. Winn-Smith!


Here is the recipe with all the great "Thrifty Changes"! 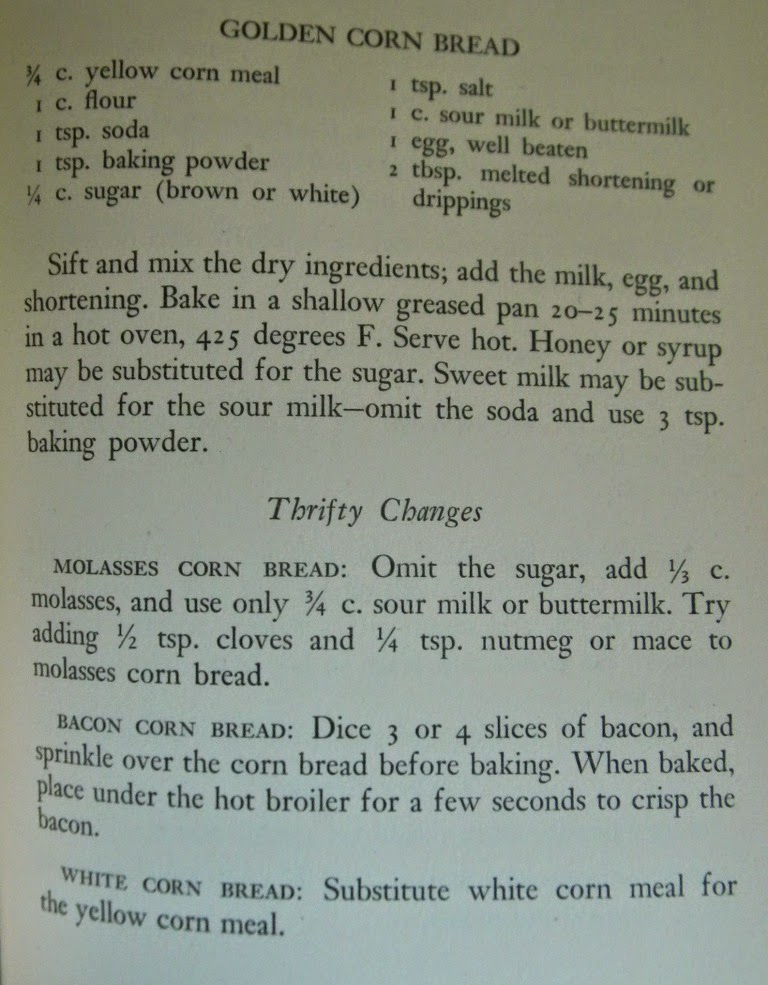