I've been doing some studying and research on an interesting aspect of the WWII American homefront. Most people who have learned a bit about WWII know about the sad and unfortunate internment of Japanese-Americans in camps in the U.S. There are a number of autobiographies about the topic which are both touching and mournful.

Well, lately I've also wanted to learn more about the other Asian-Americans' stories like the Chinese-Americans and even the Korean-Americans. Their stories are actually a bit harder to come by, but from what I have learned there is a lot of fascinating history there!

When the Japanese Americans were put into internment camps, it put the other Asian-Americans in an awkward place - should they stand up for the inhumanity of such an act by the American government? But if they spoke out against it would they be targeted as being friendly to the Japanese? As it was, most Americans couldn't tell the different Asian cultures apart and many Chinese-, Filipino-, and Korean-Americans suffered persecution and violence as a result of the despised Japanese, enemies to the United States. So in the end, many of them spoke out in favor of the internment.

What in the world does this have to do with food or rationing? Hang in there! I promise it's coming. :-)

There is actually a personal side to this story. No, I don't have Asian ancestors myself, but my great-aunt married a Chinese man. In the 1930s. In the mid-west! Recently, I have been learning a lot about her from my great-uncle who is still alive, and I am completely fascinated with her. Why did she marry a Chinese man and in the mid-west of all places, in the 1930s?? My great-uncle with his amazing memory was actually able to tell me. She, in fact, was greatly influenced by a book, of all things. It's called The Vintage of Yon Yee by Louise Jordan Miln published in 1931. It's the story of a Chinese-British young woman and the two men who love her - one is British and the other is Chinese. I decided to read it myself and it was amazing. The story is an intriguing look at the culture and feelings toward mixed marriages of that time. I think it would be a fabulous book club read that would generate a lot of conversation! Anyway, it's incredible that my great-aunt was inspired by such a book to marry a Chinese man in the 30s when prejudices were so high and right before the outbreak of WWII. It was such a rare thing to happen and I have really grown to admire her brave and unique decision.

So, why am I telling you all of this? Well, of course it has to do with this week's ration recipe! It's always interesting to see how Americans take another culture's food and make it their own. Pizza is a great example. This week's recipe for Chinese Chews is actually a holiday cookie recipe. The recipe asks for dates and pecans and besides those two things there's nothing that special in them. Why in the world are these cookies considered Chinese? Is it really the dates - or the pecans - or both? I have no idea. Is it an altered version of a Chinese cookie? Your guess is as good as mine. But someone at some point must have thought so.  (If you are very familiar with Chinese cuisine and can answer these questions, by all means please let me know!)

In any case, let's get on to the recipe. It calls for dates, pecans, flour, 1 CUP of sugar, 2 eggs, salt, and baking powder. There's a reason why this recipe was in the holiday sweets section!


In a small bowl, whisk the eggs, then add the sugar. 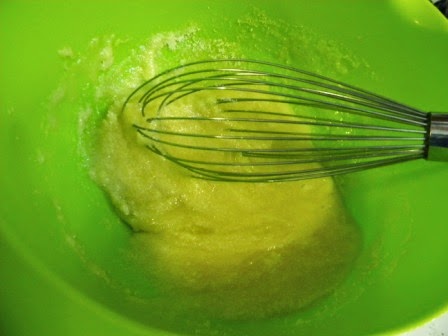 The recipe says the dates and the pecans need to be "cut". I thought this was an odd term. But then when I tried to put my not-so-fresh (and very dried out) dates in my food processor... man, that was a mistake! Pretty much nothing happened. I only hope that my little, ol' food processor doesn't hate me. I ended up having to chop the nuts and dates with a knife. Seriously, use some fresh dates! They're softer and easier to cut. :-)

Sift the flour with the baking powder and salt over the dates and nuts in a bowl. Add the sugar/egg mixture and stir until combined. 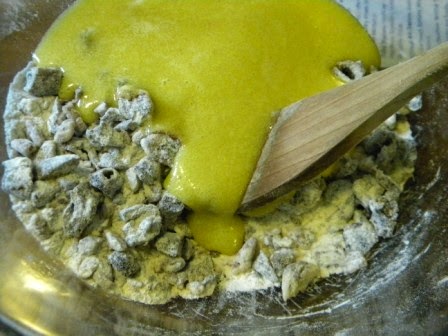 The dough is pretty stiff. 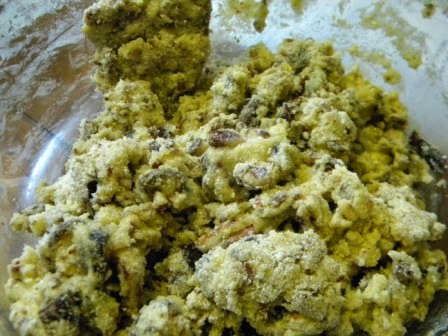 Then spread the mixture out on a greased pan. I didn't trust that this sticky mess would come off even a greased pan, so I used parchment paper. It was hard to get the mixture very thin because of all the dates and nuts. 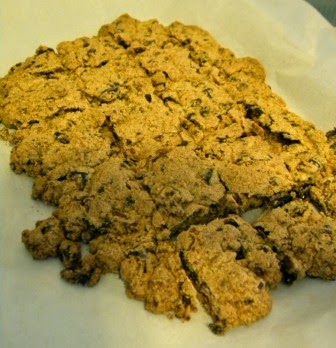 Arrg! This recipe was so vague! 20 pieces of what? Is it a bar? Is it a cookie? I think it would have made better cookies, but I was just following directions, people. 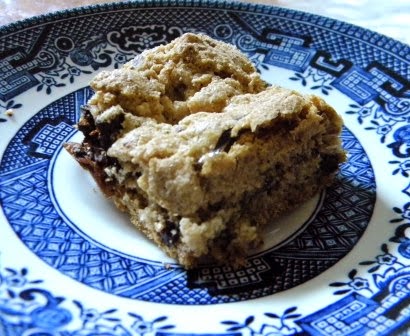 Okay, so I took my first bite and... it was like biting into a bowl of raisin bran cereal without the milk. I am not joking. These things taste exactly like raisin bran! Which is strange because there are no raisins and no bran in the recipe.

When they were warm they were fairly soft, but when they cooled they are quite the workout to eat! No wonder they call them chews. But the Chinese part? I'm still clueless on that one. If you end up making these, you might as well throw in some Chinese five-spice. It might take away the sense of eating a bowl of cereal and it would lend the recipe title a bit more legitimacy.

These "chews" weren't bad. But they were stinkin' sweet. One entire cup of sugar devoted to these is a bit much. If you're feeling adventurous tweak the recipe to your liking and let me know! From looking around the internet, this seems to be quite a traditional holiday cookie too. So if you don't like this recipe, you can always look around for a different one!

(The recipe doesn't mention adding in the salt, but just add it in with the flour.)


P.S. I just found a great blog post at Simplyrecipes.com about making a version of Chinese Chews and she did a lot more historical digging than me. Check it out here! (The Chinese thing is still a mystery though.)