This week I wanted to try another "magic!" recipe using sweetened condensed milk. During a trip to a local antique mall a few months ago I found a similar recipe pamphlet to my other Borden Eagle Brand sweetened condensed milk (SCM - way faster to write!) cookbook. This one is smaller, but it has some different recipes in it. This booklet was also published sometime in the '30s.

I've made the point before that recipes weren't static during WWII. People didn't just chuck all their old, beloved recipes just because a war was on. No doubt, women found a way to make their recipes work or found that some were able to translate well to war-time rationing as is the case of many recipes in this 1930s recipe book. Using SCM was a great way to get more dairy into the diet like the government recommended during the war and it also saved on sugar!

I was really interested in this simple cookie recipe for Praline Cookies, especially because it required you to caramelize the SCM. I've always wanted to try it, so I thought this would be a great time! It does take 3 hours to boil to create this amazing caramelized stuff, also known as dulce de leche, but you can do it in a pressure cooker for a fraction of the time! Check out this website for their directions.

So, as you may have already guessed, this recipe is a two-parter. I cooked my can of SCM one day and made the cookies another day, because on top of boiling it for 3 hours, you have to let it completely cool before opening it too.

I took my can of SCM and removed the label. 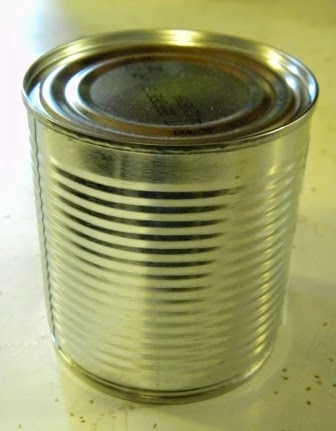 Then I filled a large pot with water - I could have done three cans since I had enough room! I ended up putting the can on its side so the water would have enough clearance above it. It's important to always keep the water level above the can while boiling it. 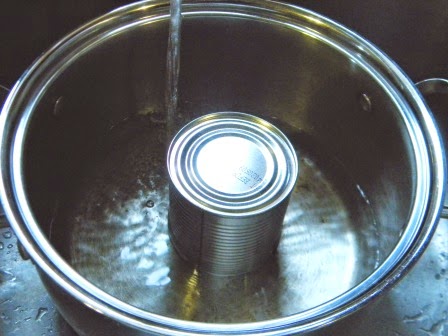 I boiled it for three hours, adding hot water as needed to keep the water level up. And - here it is cooling down! 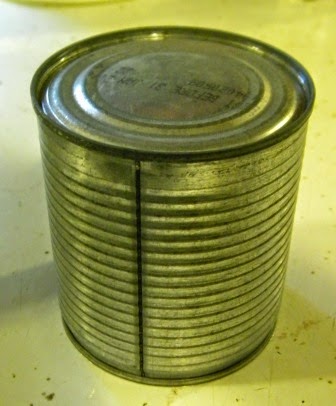 I opened it up and was amazed - it worked!And it tasted wonderful - lightly sweet and milky caramel. My daughter dug her fingers into it several times when I wasn't looking. Arrg... haha!

For cookie making day - the recipe called for butter, caramelized SCM, chopped pecans, flour, an egg, and the optional Mapeline flavoring. I ended up using it and thought it added a nice flavor. 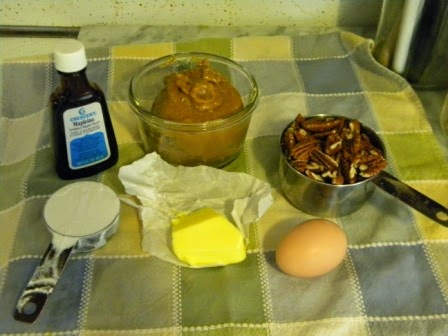 I roped my 7-year old son into helping me because this is what the recipe book claimed:

He was a little surprised, but pleased I think, to be let in on helping me with my ration recipe. Usually I do it all alone because I find baking to be theraputic and the ration recipes are just my thing. :-)

Cream the butter and add the caramelized SCM (only half the can, or the whole can if you want to double the recipe. You just might want to...) Blend together. 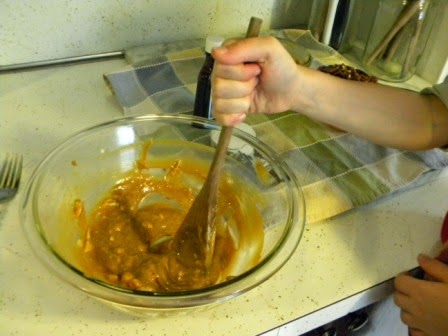 Lightly scramble an egg and add the flour. Not sure why though, because it just becomes a pasty egg mess on its way to becoming pasta dough.
Add the egg/flour mixture to the butter/SCM mixture and blend. Then add in the Mapeline. 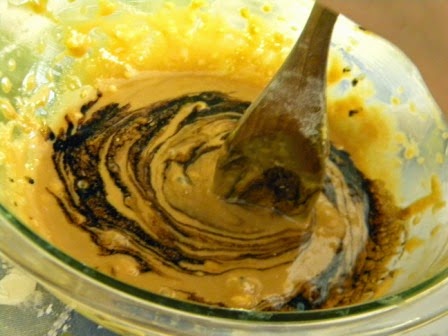 Last, stir in the chopped pecans. 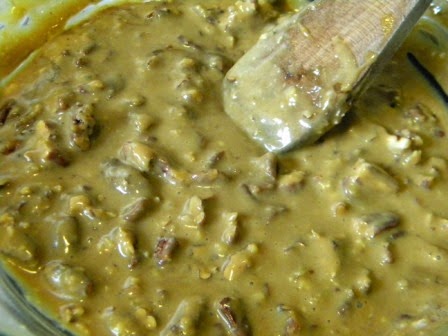 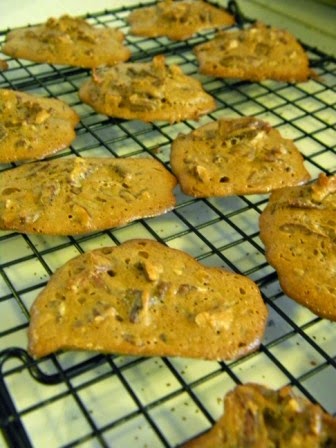 And enjoy!! These cookies were really good. Not many of them are left and they just might disappear tonight... What I loved about these is that they have a nice texture, the flavors all stand out well, and they are so lightly sweet! I'm really sensitive to sugar and get instant headaches if I eat too much, but these didn't bother me at all. It was nice that they didn't call for any extra sugar on top of the SCM.

You'll definitely want to try these!
Here's the recipe: 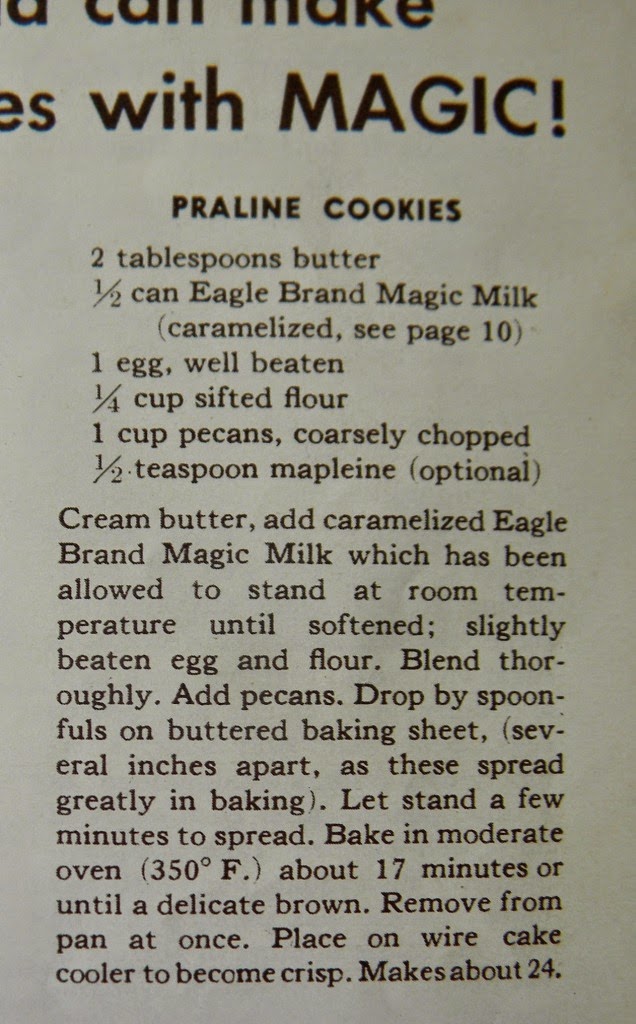 And because I know you're dying to know - what does it mean... cooking by magic???

More very valuable information... and photos! Knowing the difference between SCM and evaporated milk is very important! You can always tell by the shape of the can! Huh, who knew? I never really even thought about it before. 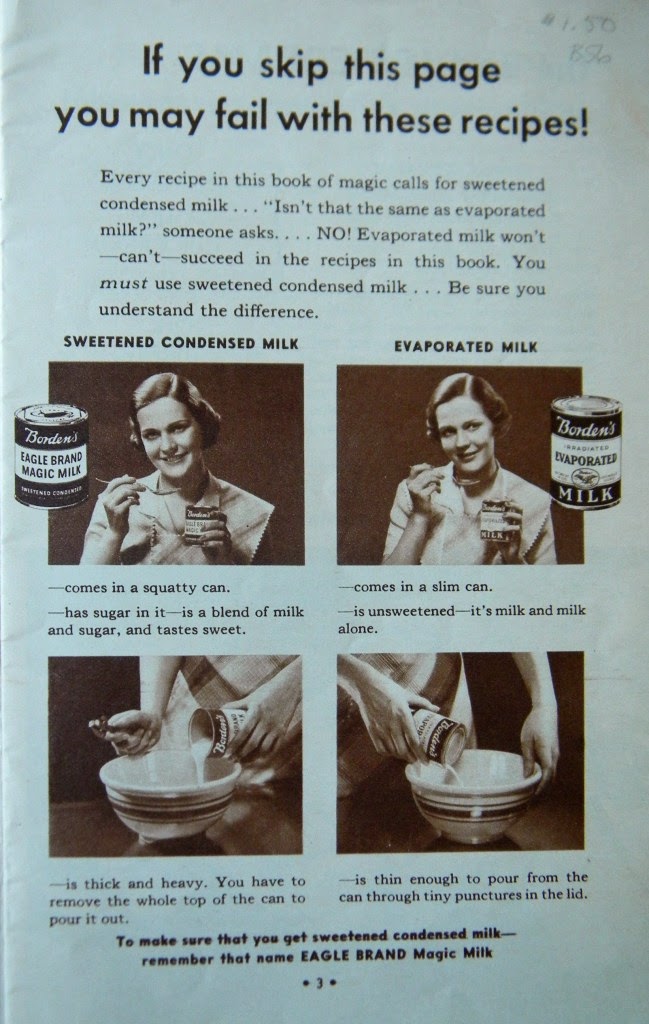 And here's a bonus recipe for a fun cookie recipe!
I like that it's similar to Mrs. Winn-Smith's theory of using one basic recipe with various substitutions to change it up with what you have on hand. 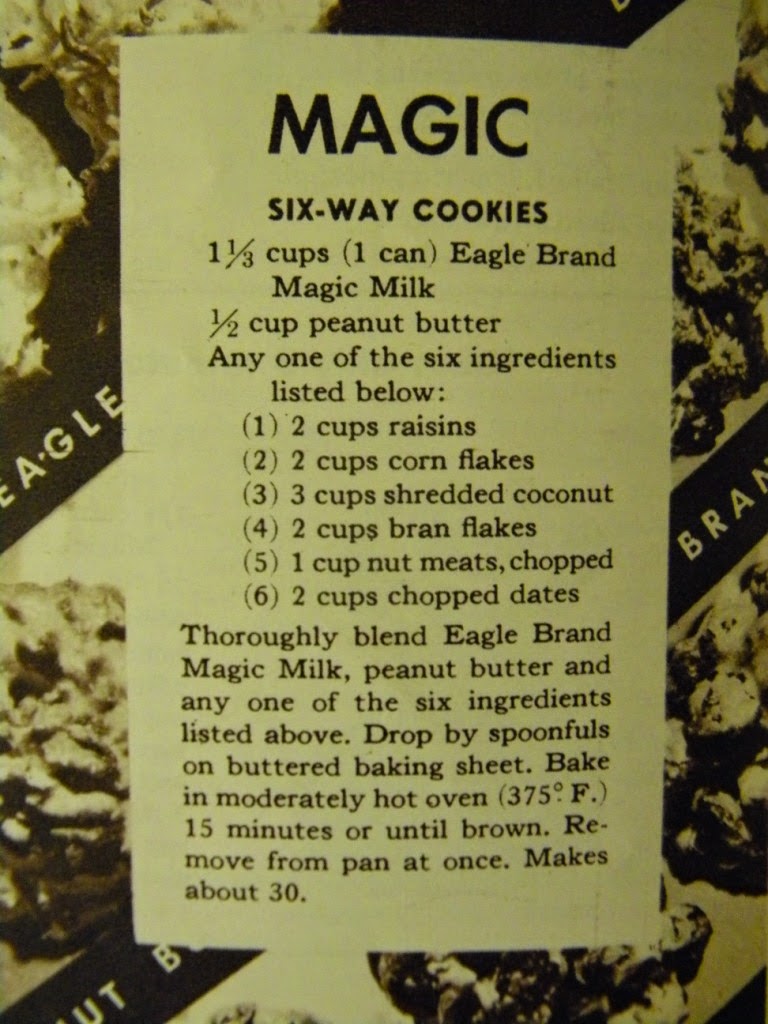