- October 22, 2014
Ration recipes come to the rescue again! I didn't know what to make for dinner tonight, but I found this great recipe in my "Eating for Victory" book which is a compilation of British reproduction pamphlets from WWII. There are a whole lot of things I love about this recipe for Vegetable Pie with Cheese & Oatmeal Crust.

1) It's fast and easy. You only have to make a top crust.
2) If you cheat like I did, you can use mixed frozen vegetables - already prepared. Or you can just use whatever veggies you have on hand.
3) It has creative ways to make your flour and fats stretch.
4) It offers a healthy dose of veggies.
5) The recipe is a meatless meal, which would have obviously saved on your meat ration.

Okay, first of all I have to defend myself about the frozen veggies. You might think they didn't have frozen veg back then, but actually they did! Alright, so maybe they weren't that available in Britain, but frozen vegetables were available in America and had been since the end of the '30s in select areas of the country. (Trust me, I wrote a capstone paper on the topic!) :-) So, I just concluded to myself that this was a Britsh/American hybrid pie. Ha!

What really grabbed me about this pie recipe was the really creative crust. It used mashed potato and oats to extend the flour and cheese to extend the fat - the mashed potato helps with that as well. I thought the flavor of the cheese, depending on what kind you use, and the texture of the oats would make for an exciting, different type of crust! I was really excited to try it.

Ingredients: cooked vegetables, stock, parsley, grated cheese, flour, rolled oats, mashed potato, lard, and salt.
Put the cooked veggies into a pie dish* and sprinkle the parsley over the top. It calls for fresh parsley, but I only had dried.

*Note: Before this step, I would suggest taking a 1/4 cup all-purpose flour and toss the cooled, cooked veggies in it. Without any thickener, all that stock just sits there doing nothing but flavoring the veg and then the pie ends up soupy as you'll see later! With the flour, it could be making a nice gravy as it bakes.

Add stock and seasoning - salt and pepper. I used part stock, part vegetable water from my cooked veggies. Wouldn't the British wartime government be proud of me? :-D 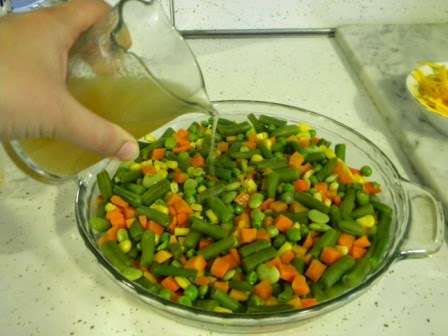 Mash together the lard and the mashed potatoes until well combined. Notice the bits of potato peel? I was using leftover homemade mashed potatoes and I like having some peels left on. Just think of all that fiber and those vitamins! Eat those jackets, soldier! Haha! 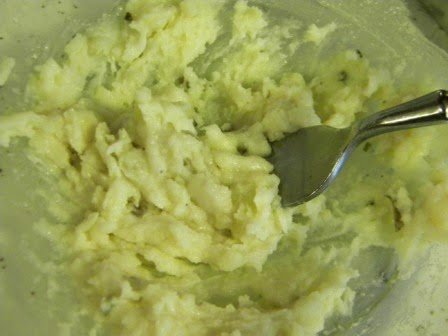 In a separate bowl, combine the flour, oats, salt, and shredded cheese together. I used an extra sharp cheddar which had a great flavor, but I wonder what the Brits would have had on hand... 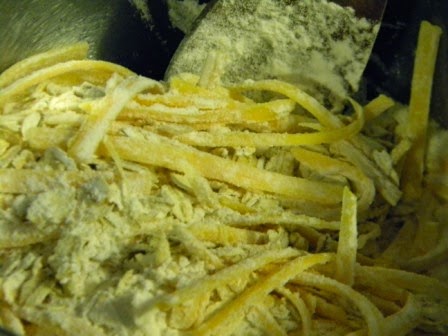 Combine the flour mixture with the potato mixture until well blended. Add water slowly and stir until you have a nice stiff dough. 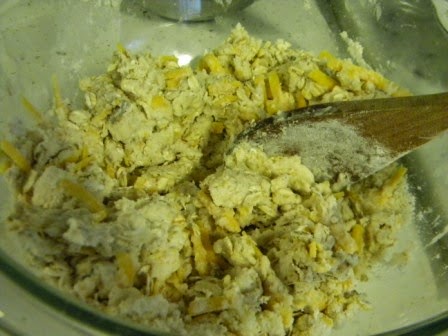 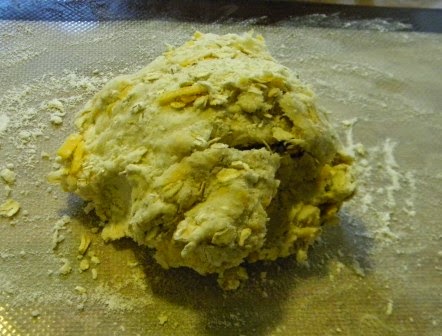 Roll the dough out... 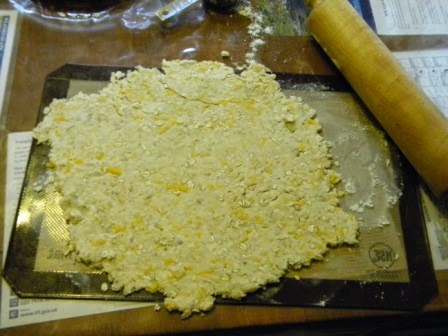 And fit it over the top of your filling. I crimped the edges to make it look nice and cut a steam hole so it wouldn't come spilling out the sides. 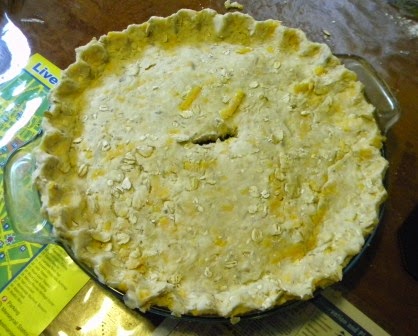 Bake in a moderate (350ºF - 375ºF) oven for about 30 minutes. I had my oven set to 350º, but had to leave it in for 40 minutes to get the top nice and golden.
When I cut open the pie, there was nothing to hold the filling together, so I had to scoop it out separately from the top crust. Blah! 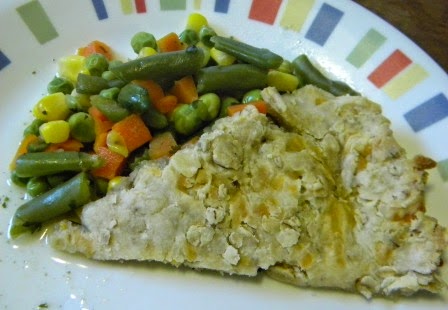 You can see how soupy the filling is with no thickener: 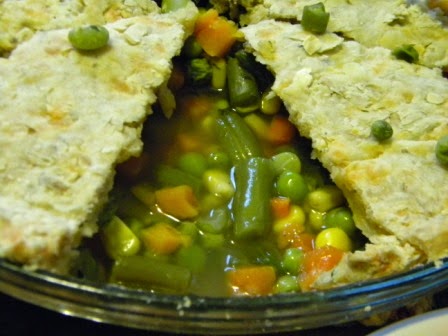 The pie tasted very nice, actually and I think it was a great idea for a fast and easy dinner. It was nice only having to roll out one pie crust. The pie crust itself was awesome - the flavor from the cheese and the texture of the oats made for an interesting and great-tasting crust. I would definitely use the recipe again.

There were two downsides to this recipe - the lack of thickener for the filling and the unstated amount of salt. I'm getting better at knowing how much salt there needs to be for savory things based on the amount of flour or ingredients used, but the crust could have used more salt. I guess I'm still learning! The filling definitely needed more salt. But that's something easy to tweak. I really think, like I mentioned above, that if the veggies were tossed in a 1/4 cup of flour, the issue would be solved. I'd definitely like to try this one again.

Give it a try and see what you think. And if you discover any other ways to tweak the recipe, let me know!

Overall, it was a great recipe that showcased British wartime cooking tactics to make a filling and healthful meal.
Here are the recipe measurements in case you don't have a scale:
(Keep in mind these are approximate. You might need to tweak a little.)