Being that it's Halloween and people dress up as things that they're not, I thought it would be fun to try a recipe for making something that was posing as something else - in this case whipped cream.

This week is the Battle of the Whipped Creams!

During the war, I imagine that heavy cream that was ideal for making whipped cream was hard to come by, especially for the British. So, they came up with ways to make whipped cream.
I wanted to compare the British recipe with the American recipe to see which one tasted and functioned as a whipped cream better.

The criteria I was looking for was:
1) Taste
2) Texture
3) Usability (how well I was able to use it for its intended purpose)

When comparing the two recipes, I think it's apparent which one will be most likely to win:

First up was the British recipe. It was important to establish some definitions.
1) Cornflour = Cornstarch
2) Margarine is not the same as vegetable spread, even if it's in a stick form. Margarine has 80% vegetable oil while vegetable spread has less than 80% vegetable oil plus more water, so it doesn't function the same in baking. At least according to the Land O' Lakes Margarine package. I actually didn't know there was a difference! So, I'm glad I read my packages.

I had to measure out the cornstarch. This was the first fatal mistake I made - I measured out too much cornstarch. I think I accidentally measured out 1 1/2 oz., when it was supposed to be only 1/2 oz.! This caused me a lot of problems later... 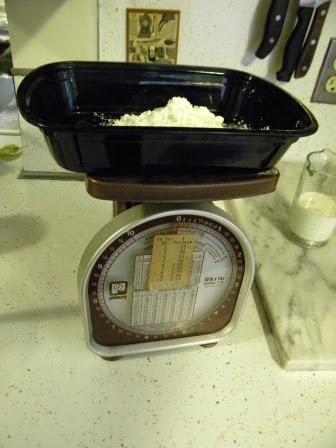 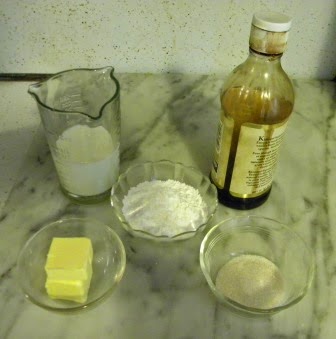 Dissolve the cornstarch with a bit of the milk. I made some ooblec or whatever it's called because there was too much cornstarch! 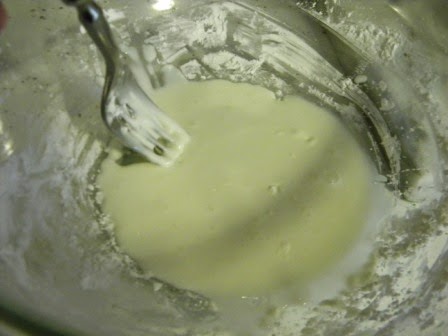 I boiled the rest of the milk, added it to the cornstarch, and then put it back on the stove to "cook for 3 minutes", but it instantly turned to a thick paste making cooking it impossible! 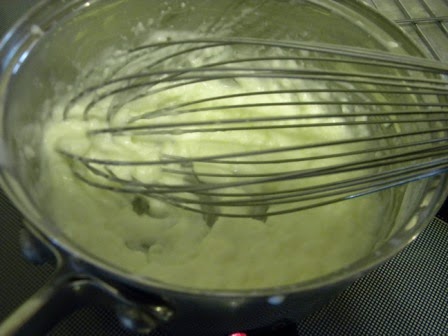 Then I added the cornstarch glop to the creamed margarine and sugar whipped it together with the vanilla and here it is in all its clumpy, yellow glory:
I didn't think this resulting product was being fair to the Brits, so I tried it all over again and it was then I realized my mistake of measuring out too much cornstarch. Things went together much more smoothly after I got the proportions right!

I even used the electric mixer to beat the cornstarch mixture in with the margarine/sugar mixture, but unfortunately, it still never "whipped". At this point, I'd have to say it was a flaw in the recipe and leave it at that. The taste test was yet to come... 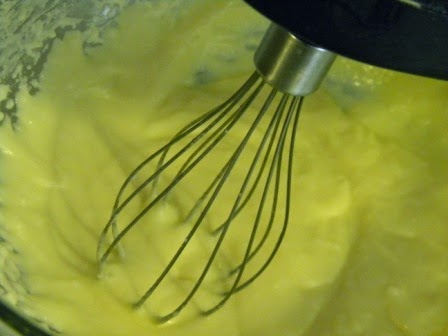 Next up was the American Knox Gelatin recipe.
Ingredients include light cream (I used half and half), milk, and gelatin. Sugar and flavoring like vanilla are optional, but I did end up using them to have an equal flavor comparison with the British version. 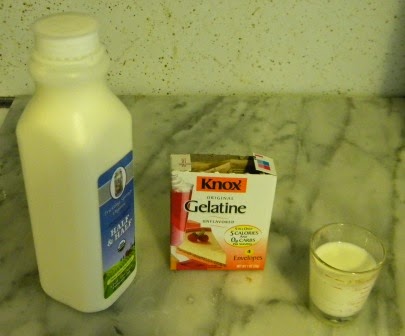 Soften the gelatin in the milk. Then dissolve it completely over hot water. 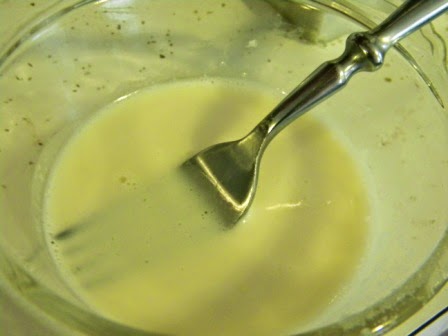 Pour your very chilled light cream into a deep, chilled bowl and beat with chilled beaters. 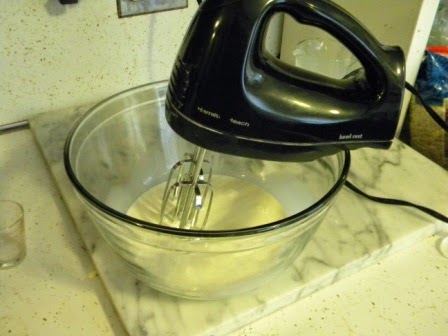 Slowly pour in the gelatin mixture as you beat. 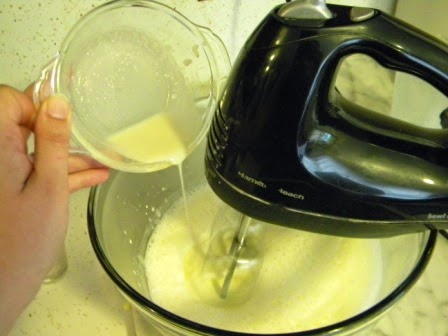 Beat until stiff. I'd have to say the mixture never got as stiff as I expected. In fact I think after beating it for so long it began to lose some of the stiffness it had acquired. That's when I stopped beating it. 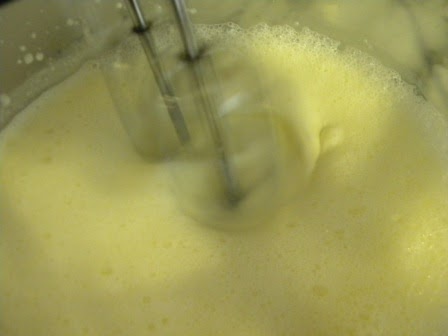 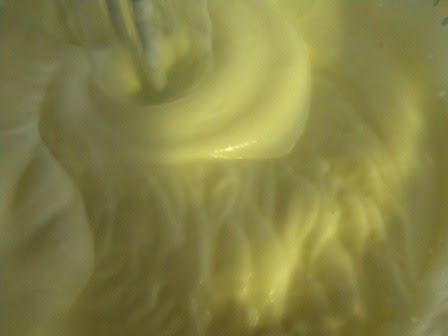 An interesting thing is that I set it in the fridge for awhile and when I took it out it looked like this: 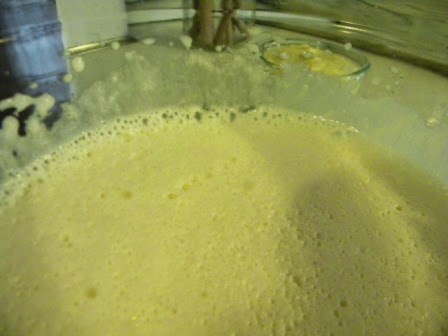 It also had a kind of "jello" texture when I shook the bowl, but when I dipped in a spoon, the bubbles had retained their structure. Not bad! 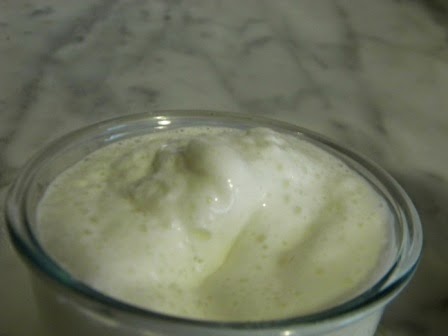 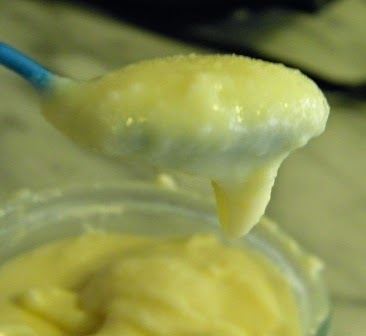 I tasted the British whipped cream (2nd attempt) first:
1) Taste = 0
While the flavor wasn't bad, it didn't taste like whipped cream. It tasted like sweetened margarine with a slight vanilla hint. Not only that, but the cornstarch left a chalky taste in my mouth. Ick.
2) Texture = 0
The texture was anything but light and frothy as whipped cream should be. It was more like a light pudding texture.
3) Usability = 0.5
While you could put this on a dessert, it would essentially be like putting sweetened butter on top of your dessert. It could still function as a topping, though whipped cream should be far from your mind when you eat it.

I tasted the American whipped cream last:
1) Taste = 1
It tasted awesome. Just like sweetened whipped cream. The gelatin wasn't really noticeable.
2) Texture = 0.5
The texture was good, not excellent and it definitely had more weight to it than regular whipped cream. It couldn't stand up on its own like a good whipped cream. But it was creamy and smooth as cream should be. There was maybe a hint of gelatin in the texture, but nothing that would bother you.
3) Usability = 1
This would work great as a substitute for whipped cream. It tastes delicious and while it couldn't be mounded up high for a whipped cream topping, it still has a lovely lightness and frothy texture.

I even tasted both on some apple crisp. The American recipe definitely shone in this taste test!


So, here's the tallied score:

So, the Americans are the clear winners, right? Well...

This one is hard to call really. The Americans are definitely the more spoiled out of the two in terms of available ingredients. It's true that compared strictly side by side on the criteria I set, the American recipe beat the pants off the British one. But to be really fair, I think the British recipe is a valiant attempt at doing the best with what they had. Is it that much like whipped cream? Not really. But it definitely adds a little something to what could be an otherwise plain dessert, and that's all whipped cream is anyway, right?

So, bravo, Brits! I have to applaud the valiant effort, and while I would never in my right mind purposely make your version of wartime whipped cream, I think it was better than nothing. And besides, "mock whipped cream" never claimed to be actual whipped cream in the end, now did it? Ha!
1940s 20th century cookbooks food Project 52 rationing recipes WWII