- November 02, 2014
We were up in Pennsylvania visiting friends for Halloween and it just so happened that they live 10 minutes from this beautiful Georgian house called Hope Lodge in Fort Washington, PA. November 1st & 2nd a Rev War encampment was scheduled and we were planning on our two families going there all together. Unfortunately, it turned out to be cold, windy, and rainy on Saturday! However, my friend Katherine and I decided to brave the weather and go on our own since she said that Hope Lodge is rarely open. I'm so glad that we did!

There weren't a lot of spectators there, but I really admired the reenactors for braving such harsh weather. I once participated in a reenactment in December and I ended up with hypothermia! So, I can really empathize with those dedicated souls that turn out in the cold months! Luckily, the house was warmer and we enjoyed a self-guided tour. I don't recall ever touring a Georgian house and I was totally in love with all the symmetry that is characteristic of that style. The house is also an interesting study in what really was Colonial (they loved color and it didn't always match!) and what later generations thought was a Colonial style (black & white). Not sure where the color got lost in translation, but things like that happen.

Another highlight was meeting a Benjamin Franklin impersonator - my first! He had an awesome sampling of some of Franklin's electrical experiments and some of them were functioning. Very cool! He was also loads of fun to talk to, so I'm glad he waved us over. We were just going to walk by his tent without going inside.

We were only able to stay about an hour because of the chill, but it was such a fun little trip. I think we'll try to make it again next year and hopefully the weather will be kinder and we can bring the husbands and kids. 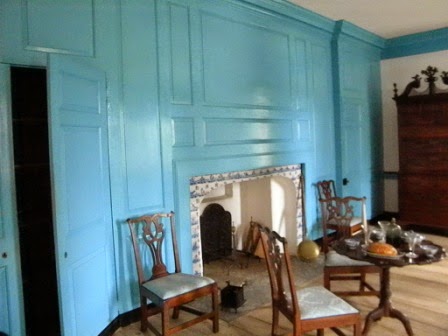