- November 14, 2014
Frankfurter Casserole. Yep. It was one of those things that I knew I should probably make, but it scared me. I mean, how good could a frankfurter casserole possibly be? What came to mind was a nightmare casserole born out of the Depression and continued stubbornly into the '50s. But since I pledged to try scary recipes for this ration project I figured I should finally get it out of the way.

We all know that casseroles save time and can feed a lot of people. They're good at using leftovers or hiding less than desirable ingredients. You can also use a lot of inexpensive ingredients for a nice, filling meal. All these reasons are what make casseroles a good ration recipe.

First of all I want to share where I got this recipe.

I realized that I've been neglecting a fabulous source for recipes - women's magazines! The only one I've used for this project was the Campbell's soup ad and that's not even technically a recipe. I gleaned this week's recipe from McCall's May 1942 issue. It was part of a fabulous article entitled "How to Keep A Man Convinced You're Beautiful". (!!!) The entire premise of this article is saying that, sure, you can put on a new dress and he might notice, but put these recipes on the table and he'll think you're the most beautiful woman in the world. Have a look:


The beginning is priceless: "A misty veil or a new dress the color of your eyes can go a long way toward persuading a man you're pretty. I'll grant you that. But if you want him to think you're downright beautiful, and to keep on thinking so year after year, never forget that there's nothing on earth more becoming to you than his favorite pie! (Now how's that for a million-dollar beauty secret, offered to you absolutely without extra charge!)" hahaha!

I also just adore the men's quotes before each recipe:
"Honey, you're a picture to take back to camp!"
"None of these young things is a patch on you!"
"Sweetheart, I swear you get better looking every day!"

haha! I just love this stuff. This article says a lot about the attitude towards women and the expectations on them at the time. It also makes an interesting statement about the image of men. Fascinating things to think about!

Let's get on to the recipe. Yes, it's that time. If the thought of making a frankfurter casserole still scares you as much as it did me at first, you needn't let it. This recipe actually took me completely by surprise. 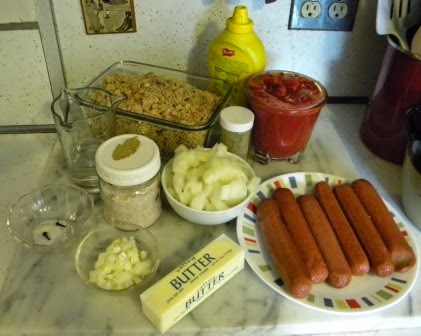 Saute the onions in the butter until lightly golden and translucent. 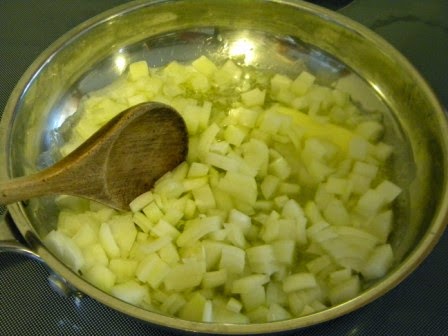 Combine the onions with the bread crumbs, salt, poultry seasoning, and water. Put the bread mixture into a 9x13 casserole dish. 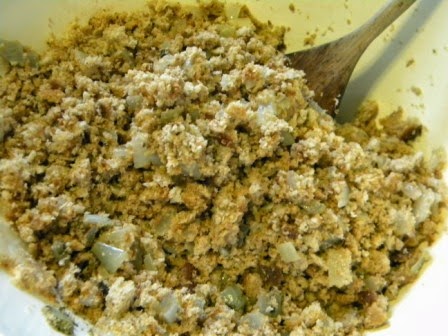 Slice the frankfurters in half, spread each with some mustard. 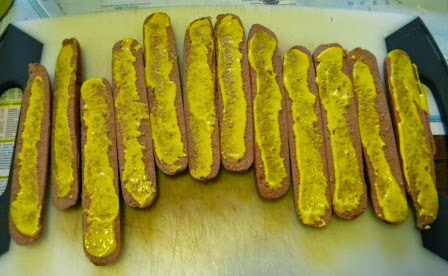 Lay them down over the bread mixture in the casserole pan. The recipe actually didn't specify which side up, but this made the most sense to me. 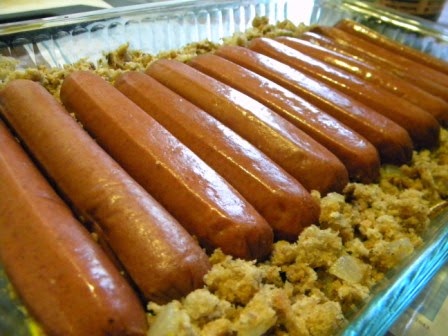 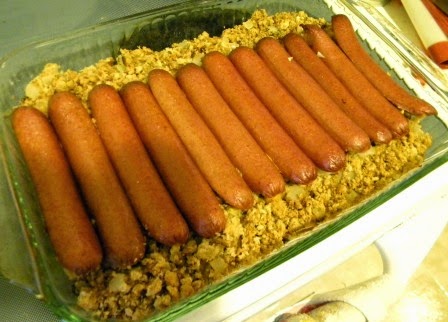 Meanwhile heat the canned tomatoes (juice included) with the sugar, whole cloves, the rest of the onions, and bay leaf. Simmer for 15 minutes and serve with the frankfurter casserole. (You're essentially making a very basic and fast ketchup-type topping, but don't expect exact ketchup flavor when you eat it.)

This recipe totally redefined what a casserole is for me. When I think casserole I usually think of a meat, a starch like potatoes, rice, or pasta, and cheese as the glue to hold it all together. This had none of those things and I was delighted! You might have suspected it, but the bread mixture was pretty much a very basic stuffing recipe like you'd make at Thanksgiving. It tasted like it too and was quite yummy with the frankfurters. Add some canned cranberry sauce, mashed potatoes, and green beans and you could call it "Poor Man's Thanksgiving Dinner!" :-) I thought the tomato topping wasn't bad on top. It wasn't my favorite, but it adds a nice flavor contrast to the rest of the casserole.

Did my husband start swooning over my beauty the minute he tasted this casserole? Uh... no. In fact, he said it was "interesting" and scarfed it down before he left for Scouts. I think his tastes tend to run toward spicy, Asian, or Italian. But that's okay. He tells me I'm beautiful every day anyway. :-)

In the end, I'm glad I tried this recipe, even if the thought of it was scary at first. It just goes to show that you can't let your assumptions about a recipe prevent you from giving it a try! So go ahead - give it a try. You just might like it! 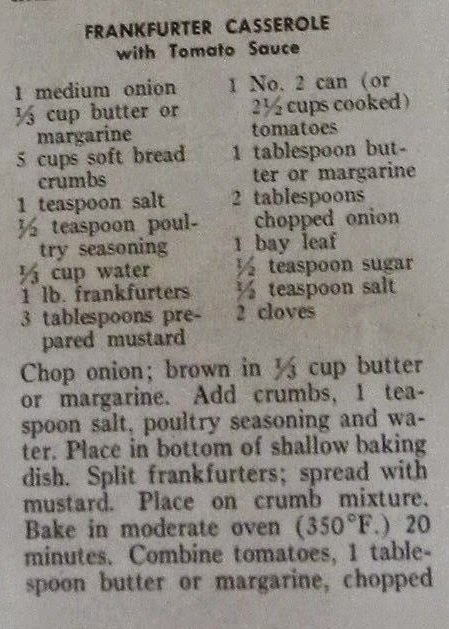