- December 02, 2014
While doing research for a history class assignment in college, I stumbled on these two great articles about "war bread" from WWI. I've been excited to share them for a long time, so here they are:

What else do you do with peanut cake leftover from oil extraction? Make bread of course!

Here are some wise (albeit cheeky!) words on "War Bread" from WWI that would have applied just as well to WWII:

"Those who can't live on the bread made from war flour will either have to die or else eat something else." Haha! I love that article!

If you remember from some of my previous ration posts, war bread made another appearance in WWII, especially in England. "War bread" or "Victory bread" was made from a mixture of other grain flours along with wheat which was referred to as "National flour". It wasn't as nice tasting as pre-war bread, but most Brits didn't have much of a choice. 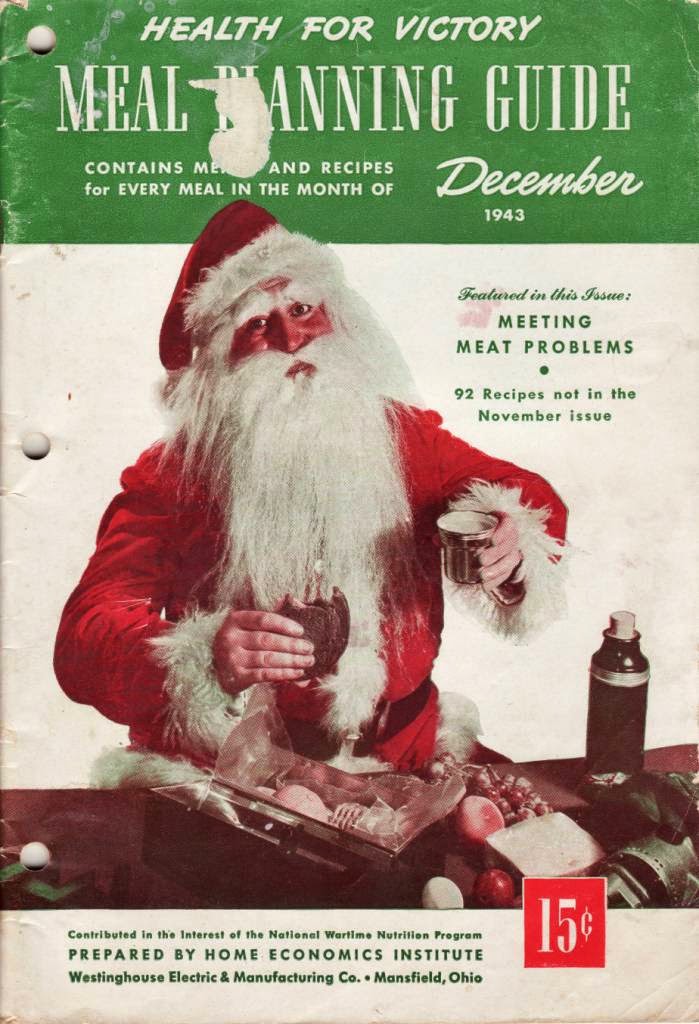 While I haven't run across any recipes for Peanut Flour Bread, another protein-rich flour that was encouraged for use (at least for Americans) was soya flour made from ground soybeans. Americans were encouraged to add soy to many of their regular recipes like cookies, ice cream, pie crust, baked goods in general, and casseroles to boost nutrition and improve texture. They even taught that soya flour could sometimes save the use of eggs too since soya flour could act as a binder. Lots of interesting things I didn't know about soy!

Thus, this week's recipe features soya (or soy) flour. I've made bread a number of times for this project, so I wanted to find another use for soya flour. The December 1943 edition of the Westinghouse Health-for-Victory booklet focuses on using soy as a meat replacement and it had a few interesting recipes where you wouldn't think of using soy flour. I decided on Soya Fudge mainly because I haven't made candy yet for my project and I've never made fudge in my life. Seriously! I actually don't even like fudge. *gasp!* (I know. Weird, huh?) But SOYA Fudge? Weirder still!

Since everyone else seems to love fudge, though, I thought Soya Fudge would make a nice holiday recipe idea... Maybe.... I guess we'll just have to see. 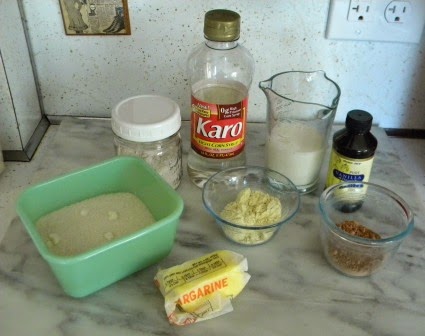 Mix together the dry ingredients, the margarine, and the corn syrup.
I realize now that the directions for this recipe weren't very good. I probably should have melted the margarine before adding it. 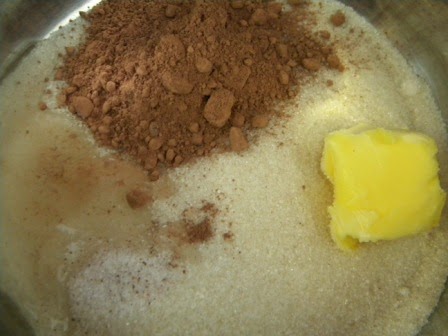 Slowly add the milk and stir until combined. 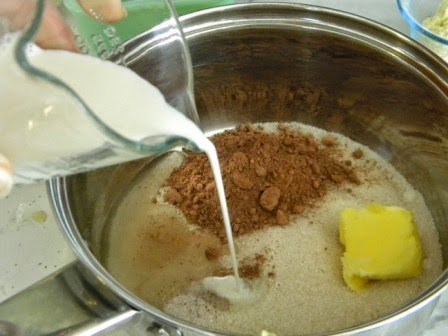 Heat (on roughly medium - the recipe didn't say!) until boiling and cook until the temperature reaches 240º F (soft ball stage). 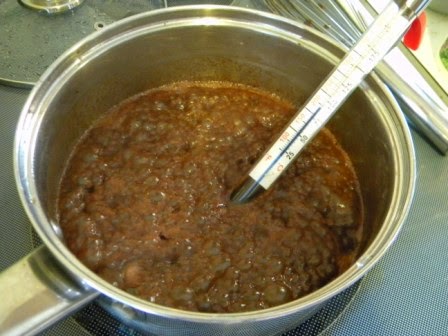 After it reaches temperature, the recipe says to sit the pot in a pan of cool water for 3 minutes to help it cool. (What?!) Okay, so I did that. The fudge on the bottom became really stiff...)
Now this is where more knowledge of the fudge process would have helped me. At this point I added in the vanilla (which the recipe somehow left out in the instructions!), and then you add in the soya flour. The recipe says to beat until it becomes thick. I guess I didn't beat it long enough, which apparently is an important stage. 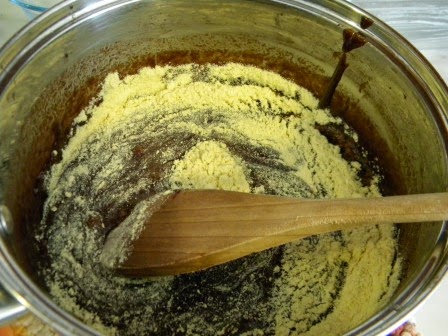 Pour it out onto a greased pan and allow to cool and set. Cut into bars before it gets too cool. So, my fudge was not thick at all and it pretty much stayed as this weird chocolatey taffy mass. I tried cutting pieces, but it just oozed back into my cut marks. Beating the fudge is important, people!!! (By the next day, though, it had hardened considerably and was nearly impossible to get out of the pan. Arrg!) 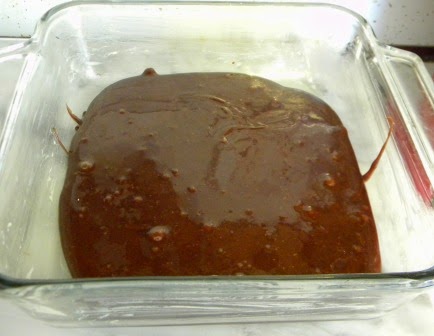 So, here it is:
Then came the taste test. I put some in my mouth and it started off pretty nice I guess. But then there was this really weird and funky aftertaste that lingered a long time after the fudge was gone. It took me a few minutes to pinpoint what it tasted like. This is going to sound weird, but it tasted like I took a shot of liquified alfalfa sprouts after plopping in the fudge. That's right. SPROUTS! It was so nasty. I mean, I don't like fudge anyway, but adding a sprouts aftertaste is just where I have to draw the line!

So of course, that meant I had to give some to my kids to try. Haha! And you know what? They loved it! I guess their experience with fudge is so limited... Poor kids.

Just to compare I had to look up a different old-fashioned fudge recipe to double check the cooking method. Check it out here.

So, in the end, I don't think this would go over well for a holiday recipe idea. Just stick with your ol' tried and true recipes and enjoy this as some quick recipe reading material. In fact, I may just need to redeem myself by attempting fudge again, this time with a recipe like "Dark Chocolate Cherry Fudge". Even that sounds good to me! 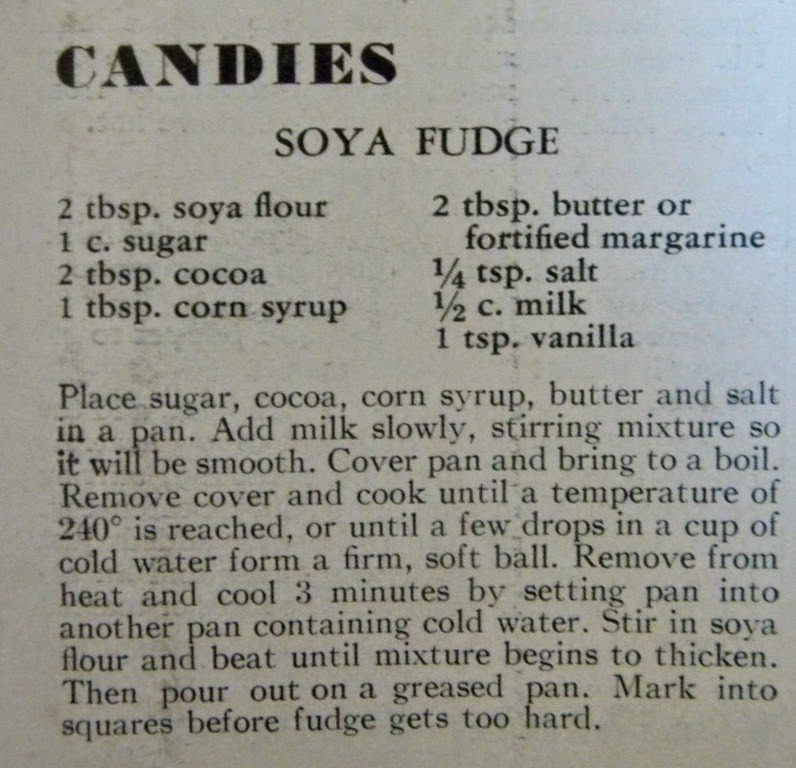 As a bonus I'm posting below the article in this December 1943 issue of Health-for-Victory about using soy because I find it so interesting! I know there are various stances on soy today, but back then they were learning how to use it to supplement their meager protein ration. Enjoy! 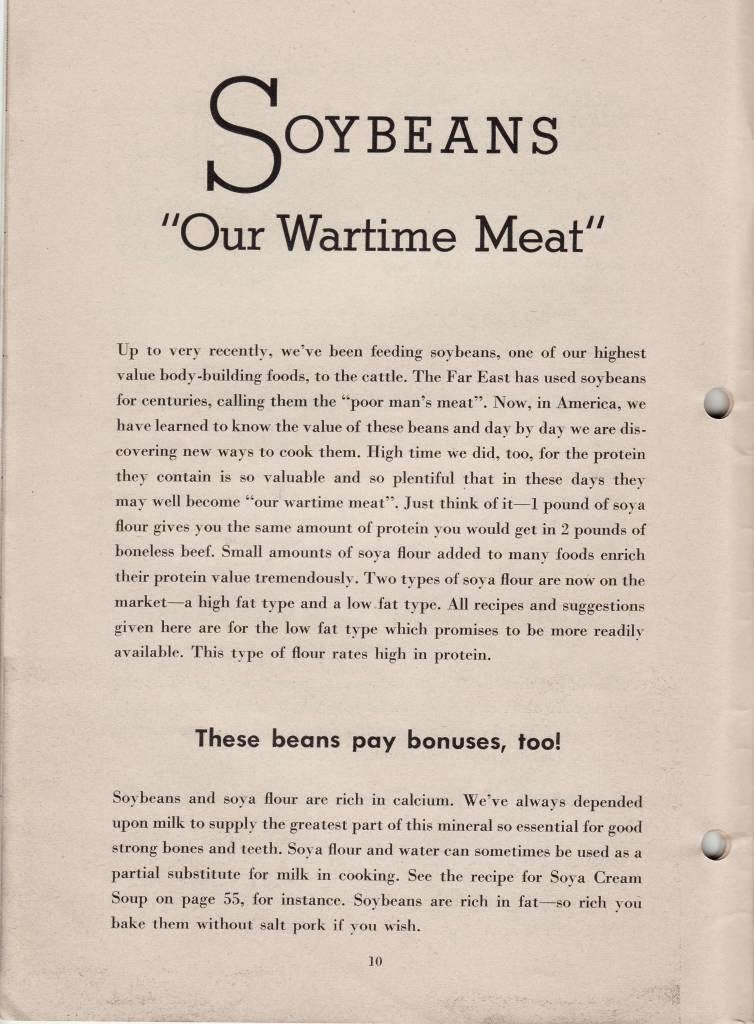 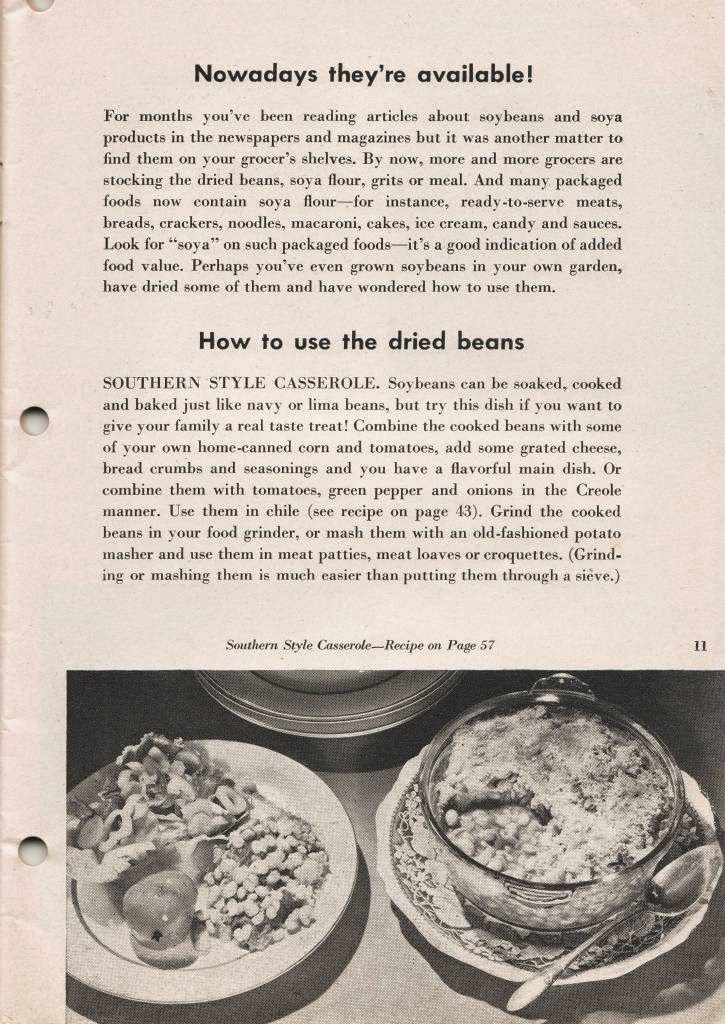 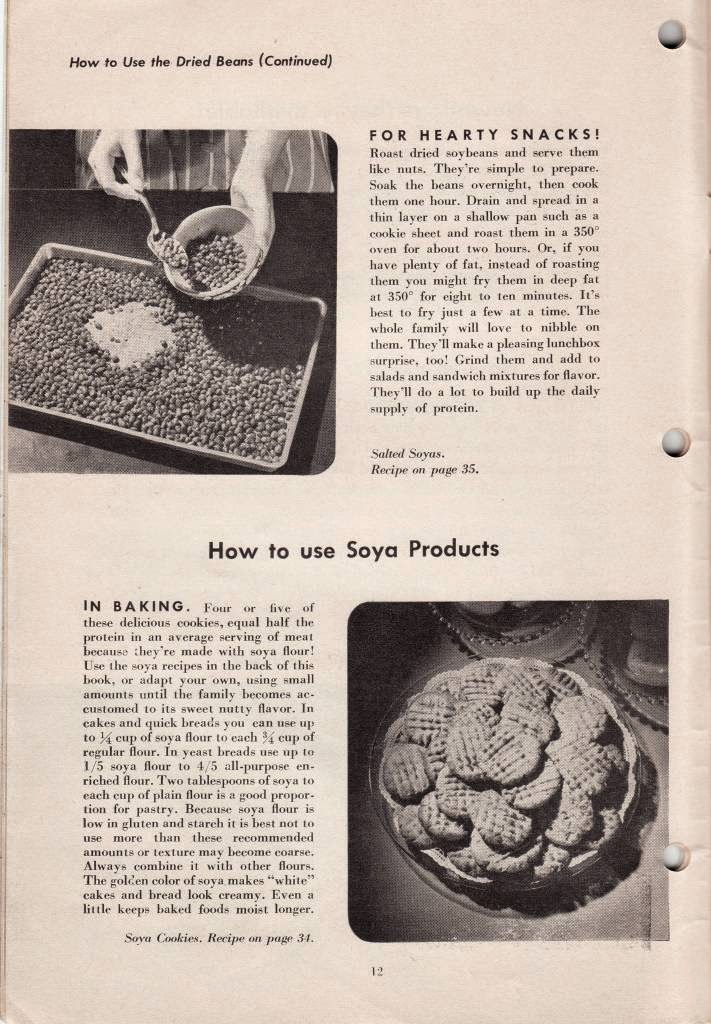 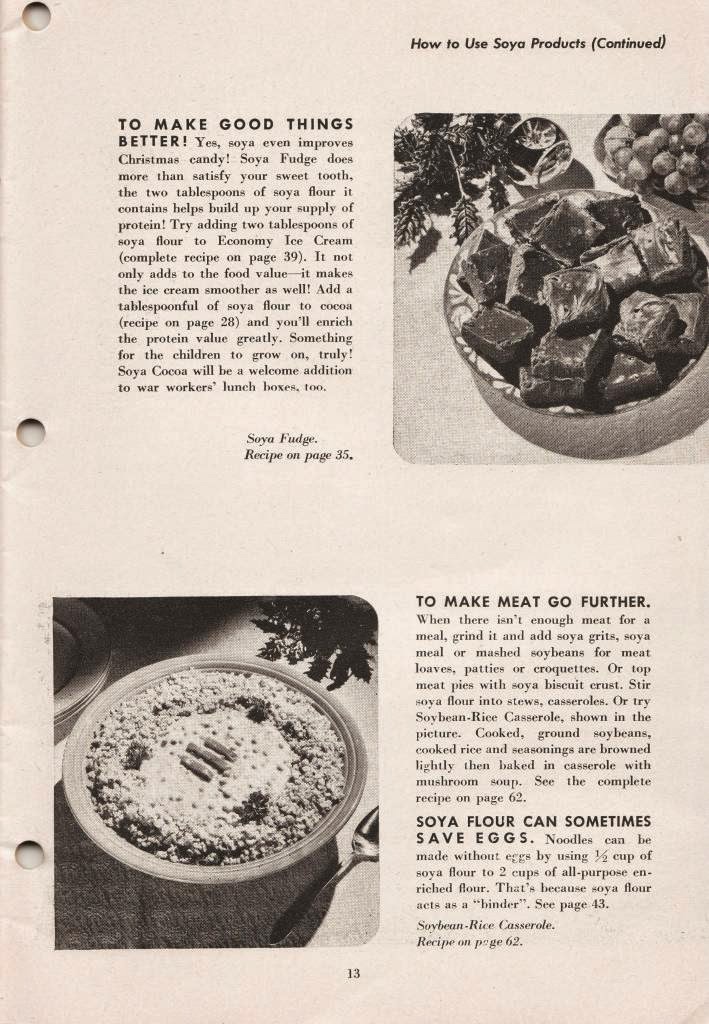 See that picture of fudge up there on the top right?
I wish my fudge had at least turned out like that even if it didn't taste that great! :-(

P.S. I did end up making a modern fudge recipe just so I didn't feel like a complete failure at fudge. I made the Dark Chocolate Cherry fudge that I mentioned above and it turned out great! My family and neighbors were happy. :-)
1940s 20th century cookbooks food Project 52 rationing recipes WWII