- December 28, 2014
I have my son to thank for the last ration recipe of my project! I was making last week's recipe, the Peanut Brittle Ice Cream, and on the next page he saw the recipe for Strawberry Refrigerator Cake. He loves strawberries, so when he saw that he begged me to make it. haha! I had a few recipes I was debating about, but he was so cute about asking me, and it was a technique of the time period I haven't experimented with yet, so I thought why not? Not to mention, I thought ending the project with a celebratory cake was a great idea!

For me, refrigerator cakes are something I associate with the 1950s, but they apparently date much earlier than that. In the 1940s, more people than ever had replaced their ice boxes with refrigerators thanks to widened availability of electricity. The air circulated better and they kept things cooler; not to mention you didn't need large blocks of ice delivered. Many refrigerators even had little frozen compartments big enough for making ice cubes, but little else. (Frozen food was still in its infancy.)

I wish I knew when refrigerator cakes first came on the scene, because whoever discovered them were geniuses! The best thing about them is that you make them quite a few hours in advance. When dinner comes around, you pull it out of the fridge and you've got a fabulous dessert! An added benefit is that you don't waste any fuel baking it in the oven. Plus, there is no sugar used in this recipe at all - just sweetened condensed milk and vanilla wafer cookies. That would have been a big bonus for saving on your sugar rations.

I am entirely new to refrigerator cakes, so I was excited to try this one out. I also love that the ingredients are very simple: sweetened condensed milk, lemon juice, strawberries, egg whites, and vanilla wafers. I doubled the recipe because I wanted to be sure to fill my deep spring-form pan to the top. :-) Otherwise it would probably fill a regular 8"-9" round cake pan. 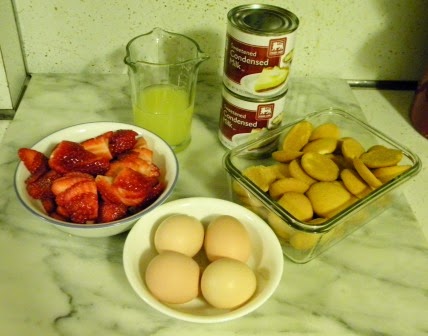 Pour the sweetened condensed milk into a large bowl. Add the lemon juice. Stir until it thickens. Slice the strawberries and add to the bowl. Stir gently to incorporate. 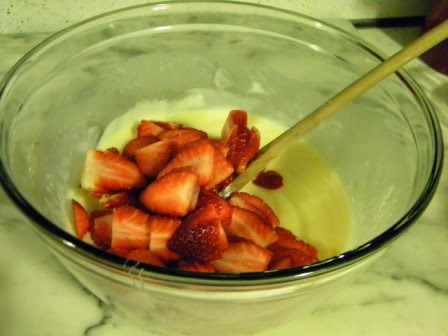 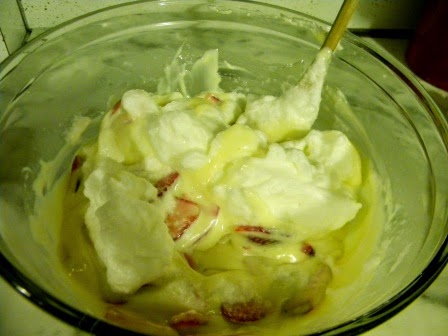 Looking good and it tasted pretty yummy too! 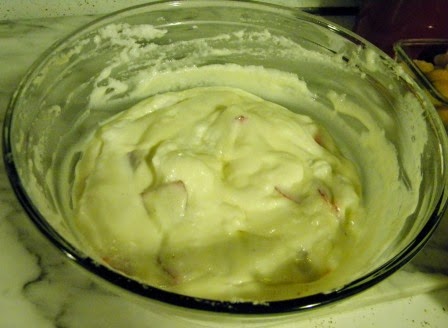 Line a spring-form pan or a "narrow oblong pan" with waxed paper. 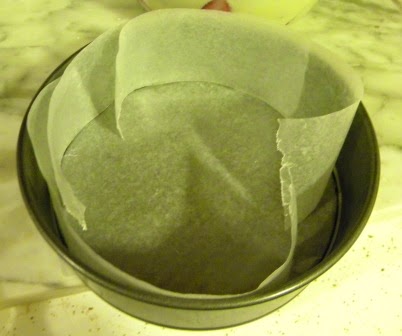 Put down a layer of the strawberry mixture, covering the bottom in a good thickness - maybe 1"? 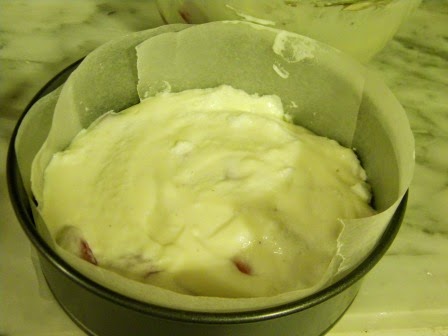 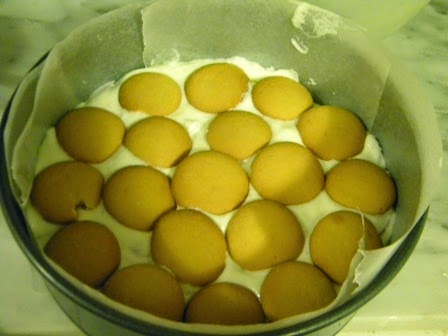 Refrigerate the cake for 6 hours or more. I'd say the taste definitely improves with time. I made the cake in the evening and we tried it the next morning for breakfast. :-) Then we ate the rest after dinner. I felt it tasted much better 24-hours later.

Carefully remove the spring-form pan and the wax paper. I have no idea how you'd manage it in any other kind of pan. Maybe just skip the wax paper lining part? 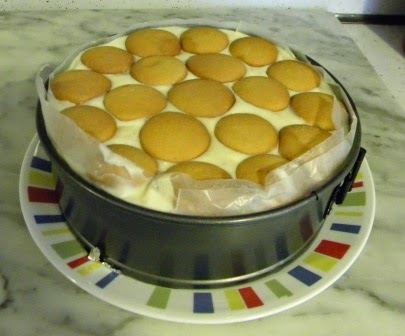 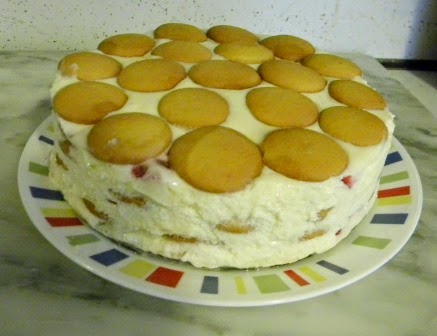 I still had to remove the bottom of the spring-form pan, so I had to invert it onto a plate and back again. *sigh* You can see my glorious cake got a little squashed because of that process. Oh well. It's the taste that truly counts!

I gave this great-looking cake a try and it was quite yummy! The texture of the filling was very nice. It reminded me of a mix between a Cool Whip pie and a very soft cheesecake. It was pleasantly sweet and lemony with the added texture and flavor coming from the strawberries. I really thought the strawberries would streak the filling pink, but they didn't. The cookies weren't as soft as I thought they might be when I first tried it in the morning, but by the evening (24 hours after making the cake), they had softened up nicely. The cake was light, but held its shape well. 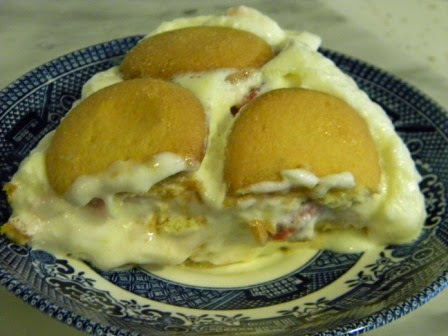 My son, who originally requested this cake absolutely loved it, as did the rest of my family! It was gone by the end of the day - always a sign of great culinary success!

If you don't mind the raw egg whites, this cake is a wonderful one. Definitely give it a try!

The other recipes I was considering come from a resource I didn't get to use for this project. I got this sweet little reproduction book from my good friend Mairi that she found over in Scotland. It's called "War-Time Cookery to save fuel and food value". 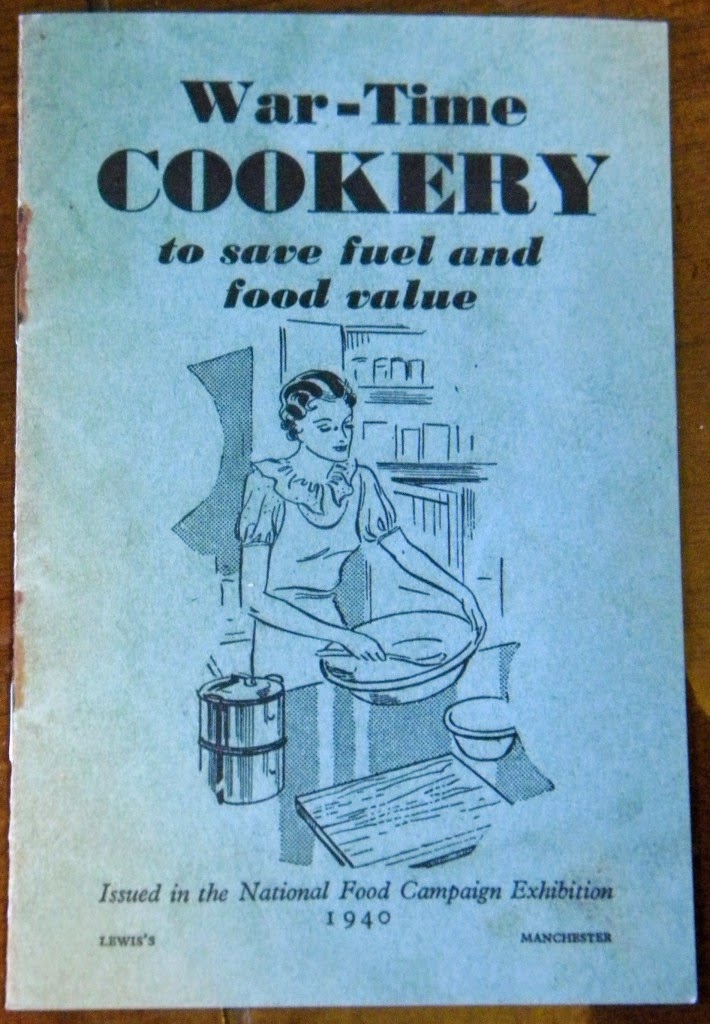 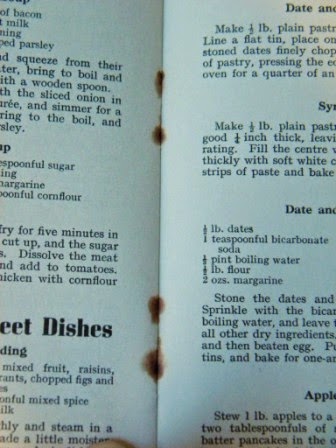 I thought these recipes looked interesting. If I had more weeks I would definitely have given these a try. 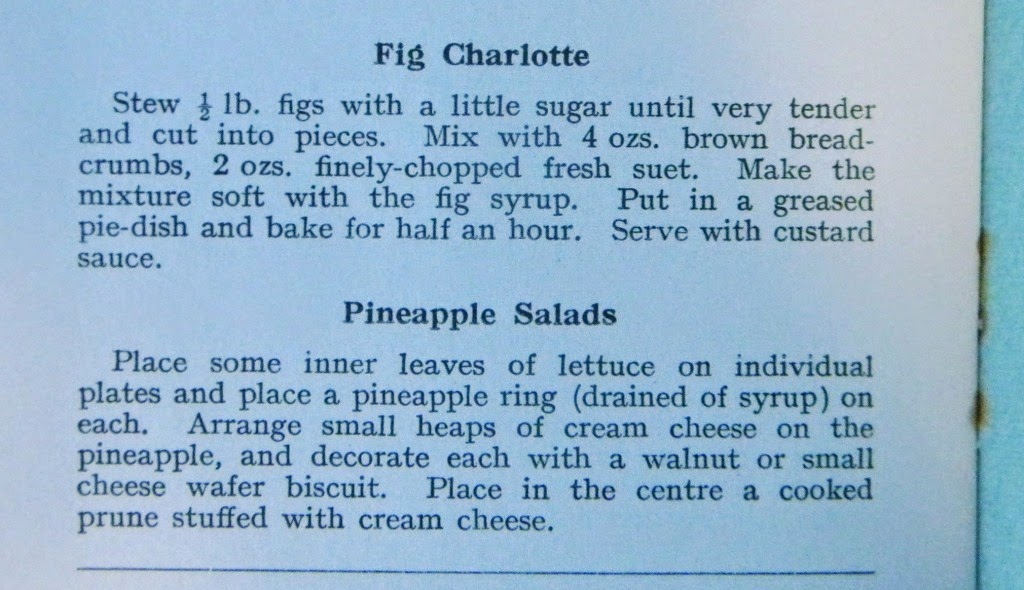 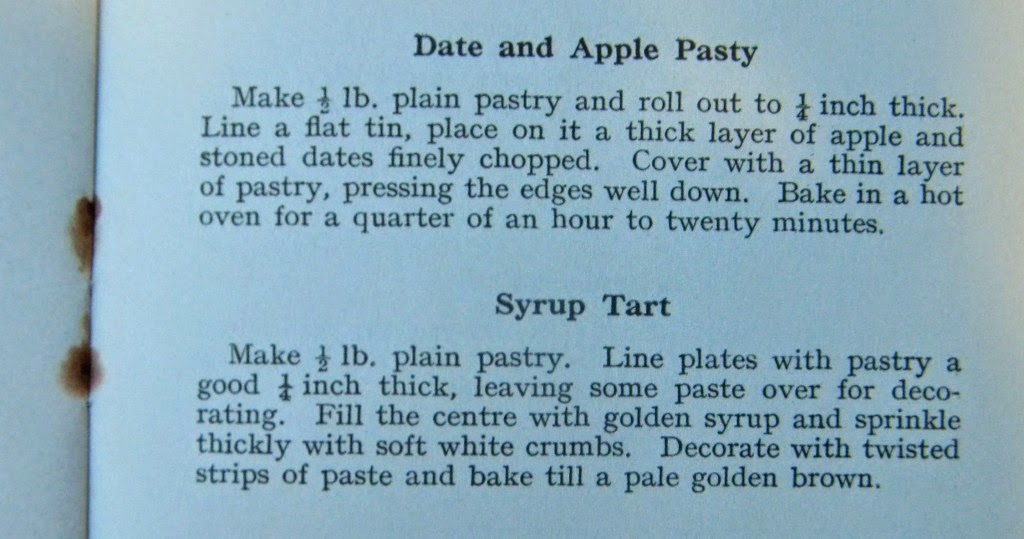 I thought I'd show my little baking corner where I've worked on all my ration recipes: 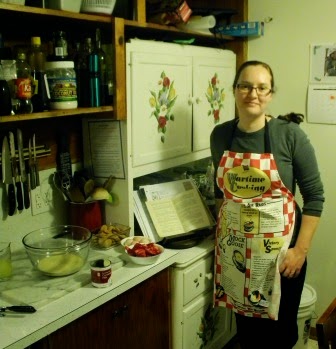 Me with my last ration recipe. Thanks for following along! :-) 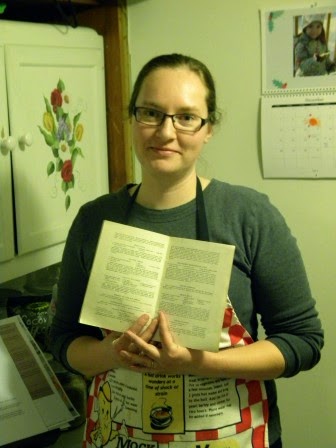