- February 22, 2015
For February's goal I wanted to finish my 5 year old daughter's 18th century shift I had started a month or so ago. It's been nice finishing up all these loose-end projects. And the most important part?I made the deadline! Hooray!

I actually ended up making 2 shifts. From the start I want to say that I am not going for 100% authenticity here. As I'm starting a new time period, the important thing right now is getting us outfitted and ready for going to an event in period clothing, and the thought of hand-sewing all of our clothing is a bit much for me! So, both of these are machine stitched and since these are underclothing where not much of it will be seen, I felt totally justified in cheating. haha!
(Oh my gosh - I never would have said such things 15 years ago as a Civil War reenactor! I think I was a bit of a snob...)

Don't get me wrong. Authenticity is important, but as I've learned over the years, everyone goes at this hobby from their own level and as they can afford - which is a huge factor.

Okay! So, this first shift is actually a Tea Dress brand dress that I found at a thrift shop. It's such a cute dress, but the collar was always too wide for my girl's shoulders. It's a simple yellow cotton, so I thought I could modify it to become a shift. I just turned over the collar, threaded in a narrow cotton tape and was done! Hands down the easiest project ever! But I didn't feel right in calling it good for this month's challenge. So, on to the next shift! 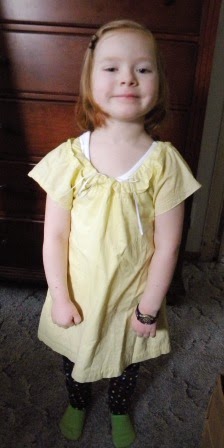 Here is the shift I made from Mill Farm Patterns' 18th century girls' shift pattern. 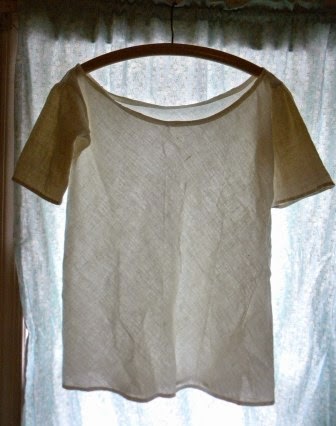 You might notice that the body of the shift is on the bias. It's on the bias not because the pattern called for that, but because I was making this shift from an old white linen bias skirt I had and then just added on sleeves. It's kind of strange on the bias. but it works though! 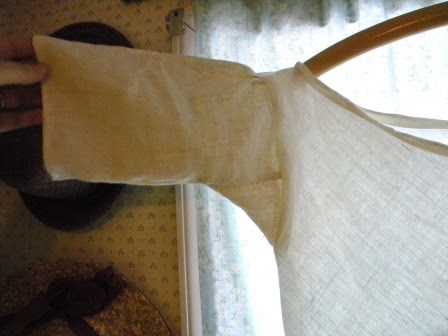 These gussets gave me a world of trouble. The directions weren't clear enough in telling which way to turn the gusset to attach it to the other side of the sleeve and then the body of the shift. I figured it out eventually though. My experience in making shifts before definitely helped, but a beginner might be a bit lost! The pattern for the shift was just two different sets of measurements to choose from and a drawing. Nothing too detailed.

And here is the shift on my little girl! I didn't have enough length in the skirt for growth tucks, but this is just a make-shift shift (haha!) and I'll probably just make her a bigger one later on down the road.