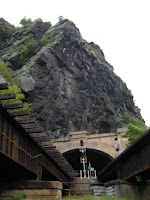 We went on a homeschool field trip with some friends of ours last Friday to Harper's Ferry, West Virginia. I've been wanting to go for some time - it's only an hour away! Our friends are studying the Civil War, so we just tagged along.

Harper's Ferry is a small river town tucked into the Appalachian Mountains. It's so beautiful! The town used to have a United States military ammunition storage (which is why John Brown raided the town), but now it's a sleepy little tourist town capped by the beautiful Catholic church at the top of the hill. Lewis & Clark also, incidentally, used Harper's Ferry as a place to stock up on supplies before heading west to explore.

One of the places we visited was the John Brown Museum. It was quite interesting. I learned a lot about John Brown that I didn't know, which is a lot considering I knew very little! I'm not really going to go into what I learned about him, but I was taken with a few elements of the museum that I thought I'd talk about.

The first exhibit that struck me was how they treated these photographs. I liked how they put them in frames - almost like a mini gallery or a portrait wall. It helped them to stand out. 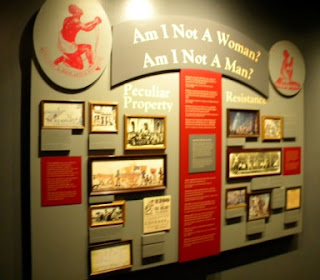 Map! I love huge maps, and I loved that I could walk right up to this map and get real close to it to study. There was a plaque off to the side that had more details behind the meaning of the map. Cool. 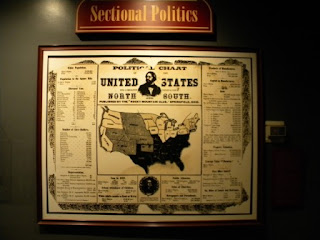 I almost moaned when I saw these gigantic computers. The dreaded technology! At first I thought they didn't work, but my son and his friend figured out how to turn on the monitors. While they are large, they were touch screen which were responsive and you could choose various people that participated in the raid or secretly supported John Brown and read a brief bio about them. I did like that, though after a time the monitors would go to sleep and it was difficult to turn them back on. That was annoying, but in the end I gave them the benefit of the doubt. 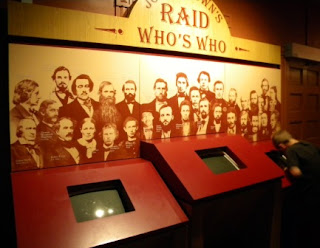 The part of the museum that impressed me the most was the moving of visitors through the museum via the video presentation. It came in three parts - one video in each room. So, after the first 5-6 minute video, you moved into the next room where the next video started in 4 minutes and the same on into the third room. The photo below is of the 2nd room.

During the video, it showed on three different monitors behind that large, black glass. You might be able to see these strange lines... well, overlaid on the glass are 2 different maps of Harper's Ferry. Little green and red dots glowed and blinked during the video to indicate where in town things were happening. I thought that was very helpful and pretty cool.

Also, as John Brown's daughter was talked about, a light shone on the girl at the stove to the right, and the same for the stash of guns at center, and the two men on the left. The part I was unsure about is that on the audio there were frequent gunshots and these bright white lights overhead would flash in time with the gunshots, simulating the muzzle flash. That was a bit startling and could be scary for little kids.

After the John Brown Museum we went into the tiny, but nicely done Lewis & Clark Museum.

I really liked this window exhibit. It does keep everything at a distance from the visitor, which can be bad in some ways, but there's nothing like peeking through a door in a window! So, this worked. There's an intimacy there that's different than a regular exhibit, almost like you're spying. I also liked that they had a sign with a numbered key and a photo of the tiny room identifying everything inside and its importance to Lewis & Clark as their supplies.

That is one of the most important things - having things labeled and giving them relevance, otherwise it becomes pointless without meaning. 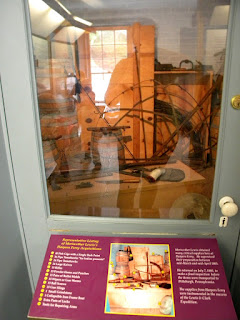 Visitors are able to get up close and personal with a replica cross-section of one a collapsible boat Lewis & Clark experimented with. It leaked, so they weren't able to bring it with them and they ended up burying it. 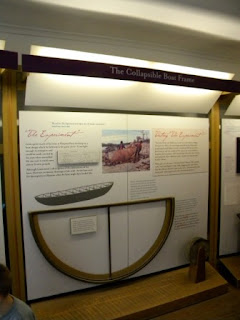 I loved seeing this "shadow house" on the side of this building on the way to the gift shop. I wonder if something had been there?... This building also contained a tiny museum about the industry of Harper's Ferry. A large part of the room contained full-sized static machinery used in the the manufacture of rifles in the town with a video explaining the process. It was quite interesting! 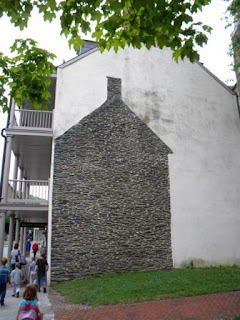 After all our museum hunting, we had some ice cream, hiked to the top of the hill to see the Catholic church, the view, and Jefferson's Rock. It was a wonderful day and a nice little field trip not too far from home. If you're ever in the area, I'd recommend a visit.
19th century Civil War exhibits museums