- August 15, 2015
Today marks the surrender of the Japanese during WWII in 1945. As a family we went to a nice local WWII event at Rose Hill Manor in Frederick, MD. It was small, but it was the perfect size event for a laid back Saturday and the perfect way to commemorate such an important, historic day.

Everywhere we went, reenactors had little portable '40s radios playing period music. It made for a very nice atmosphere. The radios were all hooked up to some mp3 device or iPod of some kind. Period look on the outside, modern technology on the inside. So awesome. It makes me want to go out and find an old radio right now and rig one up myself!

The paratrooper unit had this neat mock setup of the back of a plane. Kids could put on a fake parachute, the soldier would tuck a cord into the pack with a clip on the opposite end, and clip the kids to the line/wire running along the ceiling. Then they'd say, "Green light," and then shout "Go, go, go!" The kids jump out through the door onto a mat as if they were parachuting out of a plane. It was pretty cool.


This camp set-up was really neat. Usually at some kind of historical event when you hear "civilian camp" you automatically think "camp followers". Not so with this camp! This was strictly a 1940s version of "we are going camping in nature on the weekend and this is all the stuff we need for a fun weekend camp out". It was great! I also met some really nice ladies from a newly formed civilian group called "The War Years Society" based in the Mid-Atlantic. I'm very excited to pick these ladies' brains on civilian & homefront stuff for reenacting! Yay!

This picture is inside the Nurse's Quarters. They had a very nice set-up in here too. 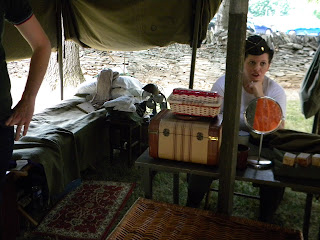 And of course I had to snoop in her trunk which was conveniently opened. I'll admit I opened a few of the cosmetic cases to have a look. Very cool. ;-) 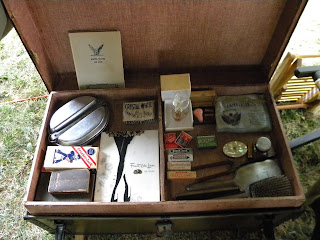 I was very impressed with inside the manor. They had set it up for the WWII event and had posters, newspapers, signs, and mini exhibits everywhere. I especially liked these little boxes that you could push a button and hear a recording of specific radio programs like FDR's fireside chats, the announcement of the bombing of Pearl Harbor and of the dropping of the atomic bombs in Japan. 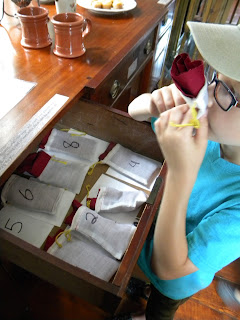 In the dining room area, they had set up a mini, hands-on exhibit about wartime rationing for the homefront and for soldiers. In two separate drawers they had a "smell" test to see if you could recognize different things they ate during the war. Some of them were really hard to tell! For many of them they had little candle scent cubes.


Rose Hill Manor is a self-professed "children's museum", which I found curious. But once inside I could see that this was a fabulous example of what a children's museum could be. Every room held something for the adults, and then corresponding activities, games, and toys for the children to learn from and enjoy. It was one of the most impressive things I've ever seen in a museum, and it wasn't complicated, it wasn't techy. It was just brilliant. I loved it! And my kids did too. They had such a great time playing with and exploring everything. Museum success! Great job, Rose Hill Manor!
1940s 20th century museums reenactments WWII