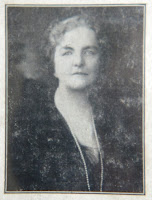 Time for another author highlight, where I reintroduce the world to a lesser-known or sadly forgotten author!

My best friend, Mairi, who blogs over at Magpie Tidings, introduced me to the wonderful Temple Bailey. She was a prolific author that wrote from 1902 until the late 1940s. Mairi knows infinitely more about Temple Bailey than I do, so I asked if she'd be my guest writer on this one.

It is fascinating to me that authors can be so popular in their own day and age, and yet do not stand the test of time. In some cases this is a good thing, as there were some pretty silly novels produced in the early 20th century. But Temple Bailey’s obscurity is not deserved.
They may not be great epochs, nor scathing social criticisms, but her stories are well written, clean and delightful, and those to whom I have introduced her books have always enjoyed them. She has several strengths that I think could be appreciated by modern audiences still.
Temple Bailey’s characters are well written, believable and engaging. She has a keen eye for detail and rewards her readers with fabulous descriptions of meals, table settings and clothes. It is also evident that she was very knowledgeable in antiques, and she describes these in many of her novels as well. She also displays a strong patriotism in all her novels.
Not much is known of her life, unfortunately. There is a lovely but all too brief autobiography found at the end of the novel Peacock Feathers, in which she expands a little on the author blurb found on the back dust jacket of her novels. Wikipedia fills in a little more — mostly about her books. She was born February 20th, 1869, in Petersburg, Virginia. She boasts of New England ancestry, but displays a deep love of Washington D.C., where she moved at the age of five, and Virginia, to which she returned to attend a girl’s school located in Robert E Lee’s mansion.
So far as I can gather, she never married. Not a strong child, she did most of her learning from her mother, saying, “[M]y father in my out-of-school days supervised my English as carefully as my mother supervised my manners.” She displays a great passion for life: cities, country and her fellow man.
She began publishing stories in magazines around 1902 - The Saturday Evening Post, Woman’s Home Companion and McCall’s among them. Perhaps she wrote of necessity, as she professed herself unambitious that way. She was very successful, making the Bestseller’s List three times: in 1919 for The Tin Soldier (number 8), 1923 for The Dim Lantern (number 5) and 1926 for The Blue Window (number 10). Two of her novels, Peacock  Feathers and Wallflowers were made into films. Her last novel, Red Fruit was published in 1945, and she died July 6, 1953. 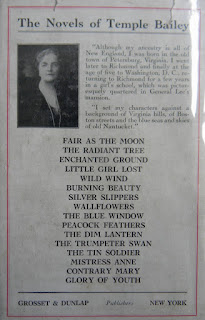 Thank you, Mairi! I am so grateful she introduced me to such a lovely author. One of the things that I love about Bailey's writing is that she has the ability to leave the reader breathless. And while some parts of the love story may seem silly, I feel she instills into her stories a level of deep and provoking thought that is not as commonly found in love stories from that time.

The first book I read of hers was The Tin Soldier, and it was such a wonderful, sweeping love story with a very strong patriotic ending. The book is set during WWI and was published right after that war in 1919. I was completely captivated, because the author was a first hand witness and then wrote about that time. It's a perfect way to get a real sense of a time period!

The next book I read was Wallflowers and I loved it even more than The Tin Soldier. Wallflowers is set in Washington DC in the late 20s and you really get Bailey's love for that city, as well as for Virginia, and for antiques. There are some delicious descriptions in there, and the family relationships are so wonderful as well. Most recently, I finished reading Peacock Feathers. The voice of her main character was absolutely mesmerizing. It wasn't my favorite of her books I've read thus far, but it was definitely a delight, even poetical in a way.

Besides her awesome name, which makes the best pen name ever, I think it should be noted that all of Bailey's books have fabulous art in them from the time.

Unfortunately, the only places you'll be able to find Temple Bailey books are on ebay or a lucky find at an antique or used book shop. I'd really recommend her though! If you get the chance to read one her books, don't pass it up. She is such a treasure among authors and deserves to be remembered.