- February 17, 2016
I am so excited to finally get started on catching up on my museum posts! This one is long overdue. My family and I visited this post's featured museum last August. It's taken me so long because I had accidentally deleted the pictures. I was so devastated, but my wonderful husband was able to recover them for me. Hooray!

I wasn't sure what to expect with this museum, but I was completely blown away! In every exhibit they used a wonderful mix of atmosphere, artifacts, reproductions, exhibit space, and interpreters. We visited four exhibits which I will detail below, though the 4th I'll feature in another post since it's chock full of awesomeness! Click on the exhibit title links to visit the webpage about them.

Cole Porter was a famous early 20th century songwriter from Indiana best known for "I Get A Kick Out of You" and the musicals "Kiss Me Kate" and "Anything Goes". This room was set up as a 1940s cabaret-style lounge inspired by the famed NYC Waldorf-Astoria Hotel.

What I loved about this exhibit was that a young lady dressed in costume was in the room ready to answer questions - and the best part - to sing a song for you! She had a list of Cole Porter songs you could choose from and she'd use an app on her phone to tell the piano which song to play for her. Just stinkin' awesome, let me tell you! Gosh, this exhibit was fun and also really personal. You felt really special being serenaded, and I can't think of a better way to honor Cole Porter's musical heritage than by having someone sing the songs to you.

"You Are There" was a series of 3 exhibits: an early 1900 photographic studio in Ft. Wayne, a 1950s LS Ayres department store, and maybe a 1930s doctor's office for a well-known African American doctor from Anderson, IN (I didn't end up taking pictures in there and don't remember now which I feel bad for!)

I'm kind of at a loss for words about this exhibit. There's so much to talk about and so much I loved, but I don't really know where to begin!

I guess to start, I can talk about the main room of the exhibit space. The theme linking the 3 exhibits together was being able to "time travel" to their times.

Before we did any time traveling, we went into a room that talked about the history of photography in general and in Indiana. What I loved about this exhibit was that they had different historical photographic negatives of people printed on thick acrylic blocks. You could then hold them over a light to see them properly. Very cool and very sturdy. You could tell they'd been handled quite a bit, but they were still very usable. That, to me, is a great example hands-on exhibit. My kids enjoyed it. 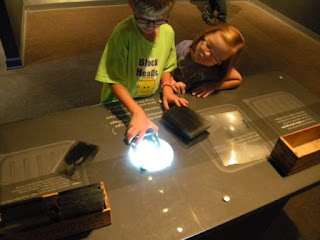 We then "stepped through time" into the early 1900s photography studio of Charles Miner from Ft. Wayne, IN. Inside were two constumed interpreters doing 1st person (I still cringe every time I encounter this method, but these people were really laid back, and I soon felt more at ease.)


I asked the interpreters if I could take their photos, and they laughed a little about it, because their characters are usually the ones taking the pictures I suppose!
They also explained how they took the photographs, colored, and mounted them. It was all very fascinating, and they were able to tell us a lot of interesting tidbits. 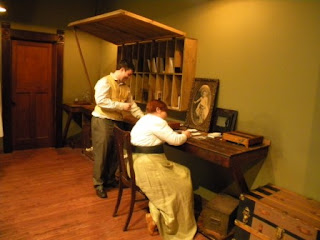 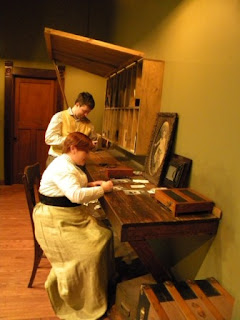 What's funny, is that we came back to this exhibit a little later because we didn't realize you could get your photo taken. After taking it, they gave you a paper with a "negative number" with the website where the photo was stored in a "virtual darkroom." Then you could crop your face from the photo and layer over it "old-timey" Victorian people with their old clothing and backgrounds with the faces cut out. It was stinkin' hilarious! Even though the exhibit is over, I'm still able to play around on the site with our negative number. I'll have to try and post some of the pictures!

That Ayres Look
This exhibit also had a costumed first-person interpreter portraying Mr. Ayres. (He's in the background in the photo below.) LS Ayres is a department store that Hoosiers know well. Sadly, it's out of business now, but as a girl I remember seeing the department store all over the place.

This exhibit had some neat 1950s clothing on display as well as great information about the department store's history. 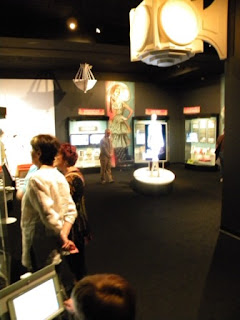 The thing I loved the best about this exhibit was the kids' hands on "Design your own L.S. Ayres window!" Pretty neat idea! 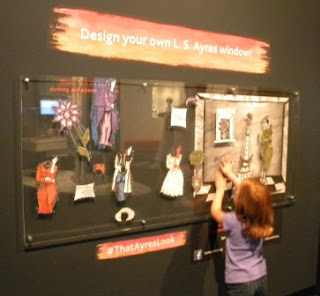 You Are There 1939: Healing Bodies, Changing Minds

For this exhibit we stepped into the doctor's office of Harvey N. Middleton, M.D. who was a cardiologist in Indianapolis from the mid-1930s, having lived in Anderson, IN before that. According to the Indiana Historical Society website, "during the 1940s he became the first black doctor to practice at both City (now Wishard) and St. Vincent hospitals in Indianapolis.

I felt bad for this man as an interpreter, because he was all alone in this room waiting for people to come in. It was interesting to see how a doctor's office would have looked in the 1930s & 40s, and I learned a lot listening to what it was like for an African-American doctor back then. You can see a photo of Dr. Middleton himself here.


Here's another close look at the "Time Travel Fog"! So cool. 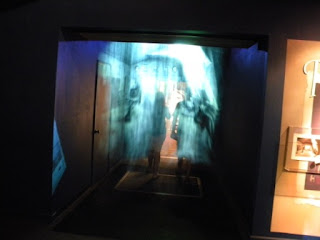 I really can't say enough about this amazing museum. I felt like they helped me connect to history on a entirely different level than I've ever experienced. As a historian and a lover of museums, that's saying quite a lot! What's great about this "You Are There" series, is that they can keep the exhibit spaces as they are for a long time. Then they just rotate out the exhibits with new ones featuring different aspects of Indiana history and the "time travel fog" stays as well with only a change in the projected image. Very smart exhibit planning! Whoever put this idea together, I want to shake their hand! (or hands. I'm sure it was a collaborative effort.)

Stay tuned for part 2! I've got some really thrilling stuff to share!