- February 28, 2016
For our anniversary at the end of last year, my husband planned a whole surprise trip to Annapolis. Annapolis is a gorgeous old city full of wonky brick streets, buildings a couple centuries old, and the picturesque waterfront. We stayed at an old inn across from the historic statehouse. Annapolis is also home to the United States Naval Academy from where many of our astronauts have graduated! 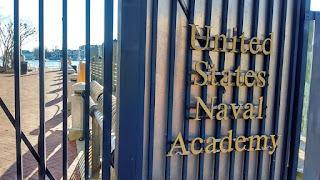 Even though it's a gated campus, we were able to go in and walk around. What's neat is that in one of the buildings is the visitor's center, gift shop, and... a museum! It is possibly the smallest museum I've ever been to, but it was no less interesting!


Despite the museum being small, I was impressed by the different types of exhibit techniques they used. I am a total fan of maps, and the large floor-to-ceiling map of this naval battle above was really cool. I also liked the up close and personal feel of the exhibit below. It's simple and basic, but I think it functions well in their limited space. 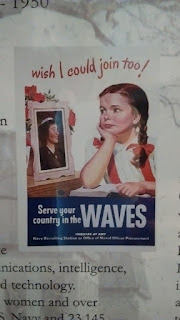 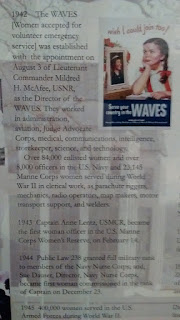 I really liked this part that talked about the WAVES along with the cute WWII poster.

About the women who enlisted in the U.S. Navy during WWI it says, "During the war 11,275 Yeomanettes had service as office administration, draftsman, interpreters, couriers, and translators; and another 1,550 women served as Navy nurses. In addition, 307 women served in the Marine Corps, mostly in stateside clerical duties at headquarters and at recruiting stations around the country." How fascinating! 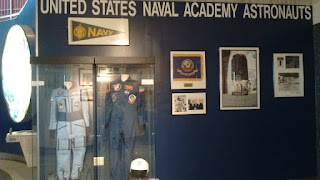 This part about the US Naval Academy Astronauts was pretty cool too. It was interesting to see how many astronauts have graduated from there.