From the Archives: Vintage Cookbooks

- March 26, 2016
Since embarking on my ration project in 2014, I started collecting wartime cookbooks and pamphlets. I have found some real treasures along the way! I wanted to share with you some of my recent acquisitions. They're not all wartime cookbooks but are still a lot of fun.

I was interested in this book because I have so many of the Westinghouse Health-for-Victory cook book pamphlets. It's quite a few years after the war, but I was curious to see how many recipes from the wartime pamphlets made their way to this book.

I got this cookbook from my friend, Mairi. I love the look. It's classic early 1930s. Cookbooks like this are important when looking at wartime cooking, because books like this would have been sitting on women's shelves and would have, no doubt, been used and still have been part of their cooking repertoire.

This cook book put out by Mirro, an aluminum company, also falls into the pre-war category. They were well known for their cookie cutters and pans.

The only thing I knew about Toll House was that there were some famous chocolate chip cookies by that name. (And yep, the recipe is in this book!) I had no idea it was a New England inn. This cookbook is full of their "tried and true" recipes. I like that it's from 1946, because they've just been through the war and I'm curious to see if any recipes show wartime restriction influence. Besides food recipes, it includes other things like tips and tricks for the kitchen and even the rest of the home with stain removal recipes and first aid hints. It's a fascinating book, besides having a great chocolate chip cookie recipe! ;-)


I love this cookbook, just by virtue of its title and author's name! It has a handy chart at the beginning for the reader to be able to track the changes in product points at the store. From what I've read it was very confusing for the grocers and the customers! Unfortunately, no one wrote in this book, which is such a shame. I would have loved to seen their notes on the price changes. 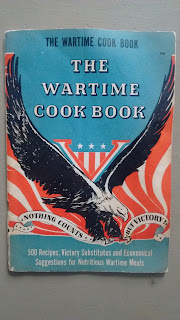 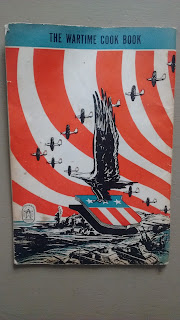 
I really like this book. It's got some great photos throughout, including quite a few of Red Cross workers. It was published, I believe, at the beginning of the war. A friend of mine who knows a lot about the Red Cross during WWII said all the women are wearing pre-war uniforms, so that's why my guess is that the book was published 1942. Perhaps they used photos from before the war, and the U.S. didn't even enter the war until the end of 1941.

Also, I've found some really interesting recipes including Rhubarb and Banana Pudding, which I plan on trying just as soon as my rhubarb starts growing. My friend Loris told me that bananas were huge during the 1930s, so finding a recipe like this isn't that surprising. I'm so excited to try it! 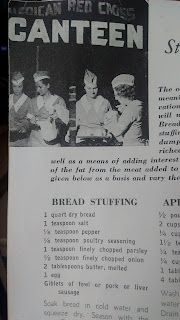 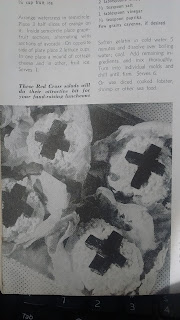 Here's one example of the Red Cross photos in this booklet as well as a fun Red Cross luncheon idea!

Stay tuned for more vintage cookbook posts! (Yes, I have quite a few cookbooks...)