- April 02, 2016
Spring is officially upon us! At least that's what our plethora of daffodils, sprouting rhubarb, and leafing berry and lilac bushes are telling me. I am so excited for another berry season and so excited for my four (FOUR!) rhubarb plants. I am going to have rhubarb coming out of my ears... :-D Perfect for trying a 1930s recipe I found for Rhubarb and Banana Pudding!

So, yesterday I had some ground up carrots lying around, and I wanted to make another ration recipe. So, I turned to my trusty wartime cookbooks. I am becoming more and more convinced that I really don't need to search on the internet anymore for recipes. I have more interesting and delicious recipes at my fingertips than I know what to do with. And once again, for my carrot dilemma, my Westinghouse Health-for-Victory cookbooks came to the rescue!

The recipe is for Carrot-Oatmeal Cookies. They sounded super yummy. When I was making them, I was putting in the teaspoon of cinnamon, a whole teaspoon of nutmeg, raisins and nuts, and I had the impression that I was making carrot cake, but with rolled oats...

I liked the currants in my Hot Cross Buns so much, that I used the rest of them up for this recipe and they were the perfect size! I don't mind raisins in my cookies, but the smaller the better, really. And usually I hate nuts in my cookies, but I think with the rolled oats and raisins, the pecans I put in worked well. The recipe I was using called for shredded carrots, but mine were chopped in a food processor. Oh well! The dough tasted fantastic, but the real test came after they were baked.

Fresh out of the oven, my daughter and I sampled the cookies. They were awesome! Mildly sweet, with a great texture and chew with the oats, but nice flavors with the spices and nuts and raisins/currants. This recipe is a keeper for sure, and a great way to use up extra shredded or finely chopped carrots! It's a nice change from regular oatmeal cookies too. 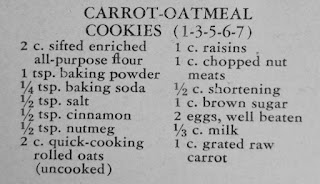 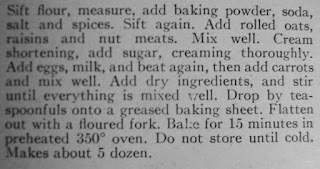