- April 06, 2016
Lately, I've been trying to be better about menu planning to help us save money on food and so I don't feel so overwhelmed when dinner time comes and I have no idea what to make! I've been planning one month at a time which has been nice. This month I was determined to fit in some ration recipes.

Last night's menu included Spanish Rice which I found in my book Cooking on a Ration by Marjorie Mills, ca. 1943.  Something I've noticed about 1940s "ethnic" food, is that the recipe is the most watered-down version possible of that ethnic food. They just didn't use a lot of spices. This recipe called for more spices than usual - salt, pepper, paprika, and a teeny bit of cayenne pepper. I was quite surprised! And I really couldn't resist. I had to add some garlic powder. I know I shouldn't have, but the Spanish Rice was just begging for garlic, and I couldn't say no! Other than that I followed the recipe. I only keep white short-grain rice around (aka sushi rice!), just because I love the texture and long-grained rice kind of grosses me out sometimes. I'm sure that the recipe would taste a bit different if I used long-grain rice.

I had to laugh that the recipe said to sprinkle "buttered bread crumbs" along with shredded cheese over the finished Spanish Rice. (I melted some butter and tossed the bread crumbs in it.) Then you bake it in the oven. It pretty much turned it into a casserole right there with the bread crumbs. haha!

Well, I shouldn't have laughed. This recipe was killer! (though I'm sure the garlic powder helped...)

After sauteing the onions, celery, and peppers in my cast iron skillet, I cooked the rest of the Spanish Rice in there. Next, I cooked the chicken I was serving with the rice in onion/pepper scrapings and seasoned it with cumin, garlic, salt, and paprika. Then once the chicken was done, I cooked some Trader Joe's frozen grilled corn in the same pan. All those blended flavors were so, so good. And the Spanish Rice was really delicious!

It makes me so happy to eat a successful Ration Recipe. I think the addition of black beans would have been great too, but I am definitely going to be making it again. 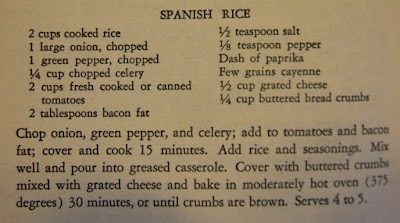 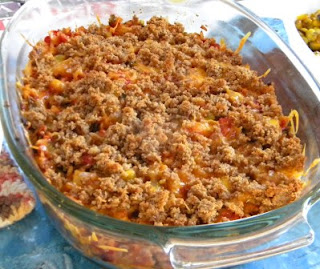