This was a recipe I saw in one of my more recent ration cookbook acquisitions: The Wartime Cook Book. It definitely caught my eye! I mean, rhubarb and bananas?? Who does that? I was telling my friend and fellow WWII-era fan, Loris, about it and she told me that banana recipes were all the rage in the 1920s and 30s. I had no idea! After learning that it made sense. They had to try all the banana combinations out there, didn't they? haha! And you know what? This turned out to be a really interesting dessert.

The only improvement I'd make is to double the bread cubes. There wasn't nearly enough bread to soak up all the moisture, even though it doesn't seem like much liquid is added. A lot of juice comes out of the bananas and the rhubarb too, which I didn't really consider. I ended up adding more bread cubes after baking and that made it a lot more like a bread pudding. Next time I'll double the bread cubes.

I'll be honest. The color is nothing to get excited about. It's this weird green/tan color. But if you cover that in whipped cream, you're good to go. The flavor is so interesting! It's mildly sweet, but tart. Kind of like apple, but without the apple flavor. The banana is a very subtle flavor in the grand scheme of the pudding. But the bread cubes browned in butter add the perfect note of salty fat that the pudding needs. I think it's pretty good! My family isn't a fan, so I'm slowly eating it by myself. Good thing I have plenty of whipped cream! :-D 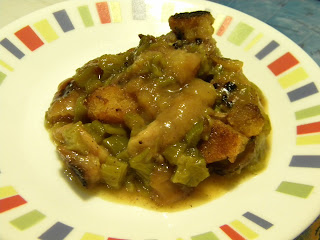 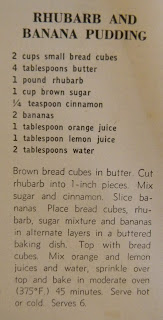 Here's a fun picture from the cook book. 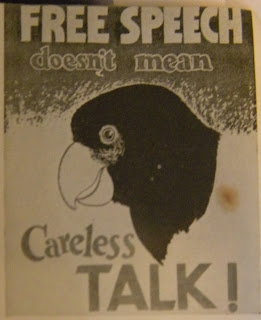 This phrase is at the bottom of every page!