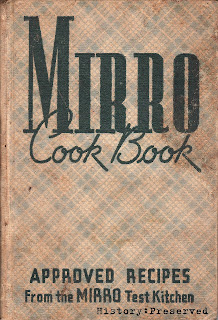 I wanted pancakes the other night for dinner, so I turned to my historical cookbooks. I have had a dickens of a time finding a pancake recipe that doesn't fall flat. (Seriously, it doesn't matter if the recipe says they're the "fluffiest ever!", they just aren't for me. Arg.)

So, instead of trying a ration recipe, I decided to try something from my 1937 Mirro Cook Book. I found a recipe for French Pan Cakes! These looked very similar to the batter recipe for the good waffles using the egg whites whipped separately. Have you ever tried waffles made that way? My friend Loris introduced the recipe to me for a waffle night our families had together. We made them using our vintage waffle irons. It was fun! And they were amazingly fluffy and incredible tasting. Mmm!

Anyway, this recipe required the yolks to be added to the batter and the egg whites beat separately, then folded in to make extra fluffy cakes. I was surprised it called for three eggs. It made the batter extra yellow, especially considering our chickens' eggs are almost orange in color. Surprisingly, it didn't make them taste eggy like German pancakes.

I tried a pan cake fresh off the grill (of course!), and it was awesome! I like my pancakes on the salty side, and these were perfect. The recipe instructs for you to spread them with jam or butter and sugar, then roll them up like a jelly roll and serve them as a luncheon dessert. Never mind serving pancakes as a dessert, but serving dessert at lunch! Ha!

I wasn't sure about the whole rolling up the cake thing. It didn't stay rolled very well, and I wonder if I needed to make them bigger and spread out the batter more on the griddle? I don't know. I just intended to make them like pancakes and serve them like pancakes with syrup, so I just made a couple like they suggested and used butter with cinnamon sugar. It was yummy! Really, it's hard to go wrong with pancakes. :-)

In the end, I served the French Pan Cakes with some mixed berries I cooked down, some Grade B maple syrup, and some sausages. It made for a very nice dinner!

If you're looking for a great pancake recipe, this is definitely one to try. The egg whites is an extra step, but it's totally worth it!