- September 25, 2016
I've been meaning to post about this museum we visited way back in January! Yikes! I'm finally starting to catch up on my posts, though.

The day before a big winter storm this past January, my kids and I took a field trip to the Goddard Space Flight Center here in Maryland. We'd been studying outer space in our homeschooling as well as humans in space, so this museum was the perfect match for our studies. I know I usually write about historical museums, but I like studying the techniques used in all forms of museums. There is so much we can learn from other disciplines of study and how they present that to the public in a museum space. The Space Flight Center was no exception!

Our timing of taking the field trip was perfect (right before a big snow storm), so no one was there at all! We got the place all to ourselves, which is an awesome way to explore a museum - unhindered, low-stress, and QUIET. :-)

The museum was smaller than I was expecting, but it was nice and open. I liked the industrial look of the ceiling which was practical for hanging things like lights and large artifacts like satellites. 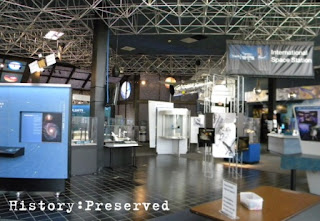 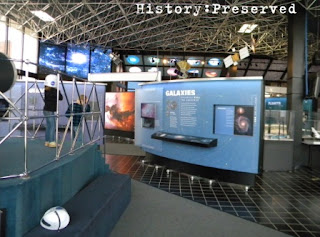 The first thing my kids gravitated to was this shuttle. It takes up the back corner of the room. 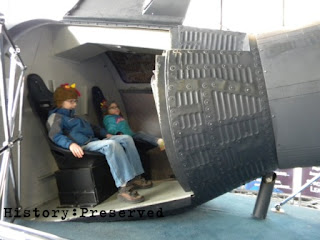 You can get a better idea for the scale here. It's definitely set up for a line of kids. Lucky for us - no line whatsoever! They got to play to their hearts' content. 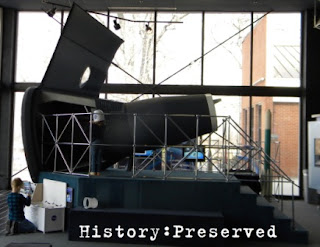 Of course, the best part was all the switches, buttons, and gauges inside! 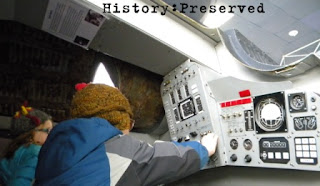 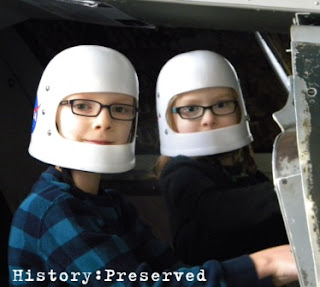 I loved how many hands-on things they had at this museum. It seemed every exhibit had some way to engage. They were thoughtful about kids too. There was a set of stairs and a platform so kids could climb up and be the actual size of an astronaut with this head cut-out. So fun! I liked that it was an actual photograph and not a hand-painted one. The more realistic, the better, I think! 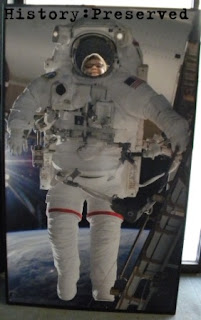 This demonstrated about magnetic fields. 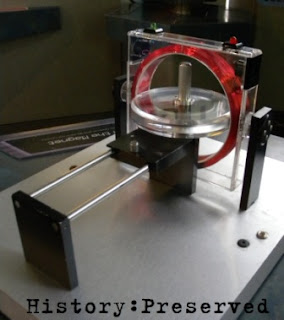 With levers you could separate this breakdown of the Hubble Telescope. There were numbers on the different portions with descriptions labeling what they were. It was a little tedious to go back and forth, but it was still really interesting. My son loved seeing the inside and being able to control that himself. 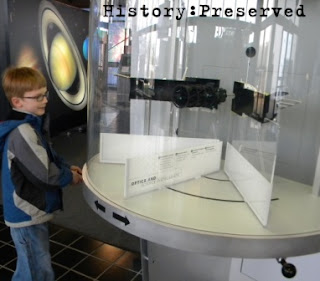 One of our favorite exhibits was this infrared camera. The exhibit talked about how they use infrared to study things in space. It was cool to see yourself on a normal camera compared with the infrared. The kids had a lot of fun goofing off in front of it and taking their coats on and off to see the temperature difference. 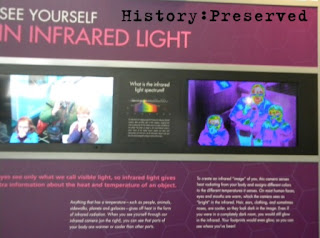 Okay, we've all seen one of these plasma balls, right? They were super cool back in the '90s. What's neat about this exhibit is that it uses this ball to talk about plasma in relation to the sun, which is fascinating because that fact usually gets lost with the wow factor of being able to touch the ball and interact with the plasma. 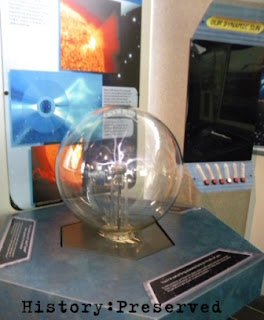 I really liked this exhibit. It was a fantastic demonstration about the composition of lunar soil (they used synthesized soil) compared with sand and other things we're familiar with. You can spin each disc to see how the different soils react to the centrifugal force. Really fascinating. 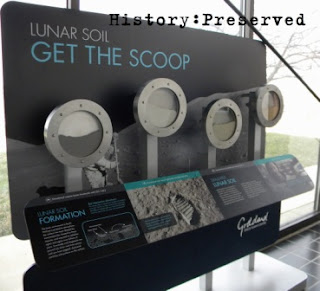 The kids loved this room too. It was a bit off to the side on the other side of the main room of the museum. The room was totally dark, except for this projection of the sun onto this large, curved wall. It was a neat experience to be able to walk up and play shadow puppets on the sun! haha! You got a good, close-up (and safe!) idea of what the surface of the sun is doing all the time. 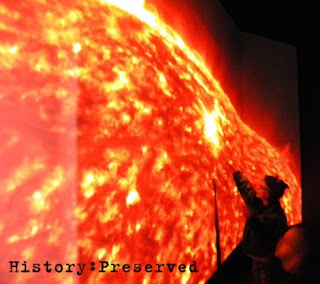 One of the things that impressed me the most about this museum was their use of their large windows. On one side they covered the windows with images from space that let the light through, so all the images glowed. It was an amazing effect! From the outside, it doesn't look like much. In fact, it made the building look kind of abandoned. But like a stained glass window that doesn't look very impressive from the outside, the inside was spectacular. Just a really neat use of space using the actual sun to power the exhibit. So cool! 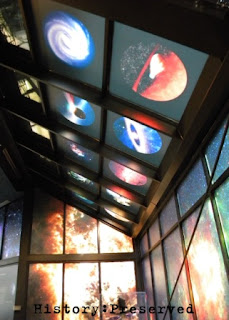 The museum wasn't just indoors. They had a really neat outdoor space with mini exhibits circling a large rocket. My son loves studying about the elements, so was naturally drawn to this board about elements found in space. 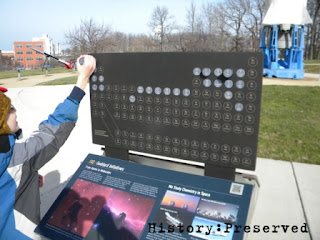 I really liked how much of the museum let you get up close and personal with real, original artifacts like this satellite on treads. 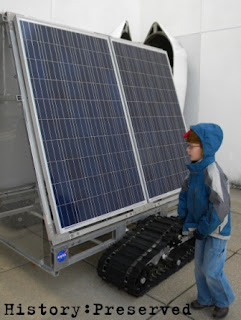 Here's a view of all the different mini-exhibits on the walk. It was pretty cold outside, so we didn't stay long. 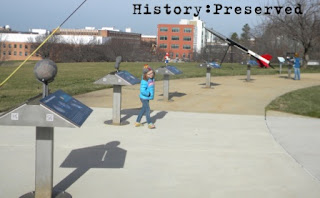 I love this photo. How cool to be able to get up-close and personal with a rocket! 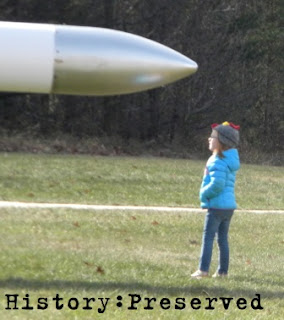 The Delta Launch Vehicle was the star of the outdoor space. My son is looking up to grasp the height of this thing. 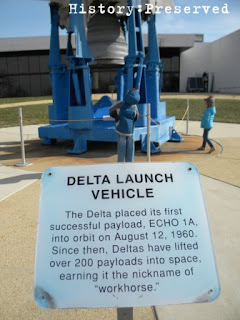 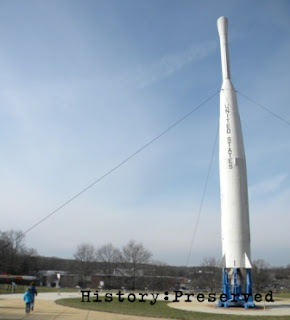 They had another room inside with short educational videos playing on a loop. They were dated, though, because they were talking about sending a satellite towards Pluto, and at that point, the satellite had passed Pluto. I can imagine it would be hard to keep specific videos up to date with all the changes constantly going on in the field of space exploration. It was a nice break to be able to sit down and watch them though.

Another thing I liked, was that they had a nice variety of space-related coloring and activity sheets to take home. I put together some fun packets for the kids to work on later.

Afterward, we headed outside to a neighboring building where the gift shop was housed. I bought some space ice cream (of course!), because it's something I remember fondly from my field trips to science museums as a kid. My son liked it, but my daughter wasn't a fan. Oh well. Freeze-dried ice cream isn't for everyone!

Overall, this was a really great museum. I know our visit was greatly enhanced by the fact that no one was there. I mean, how often does that happen?? If you're ever in the Maryland/D.C. area, I'd really recommend a visit to this fun and fascinating museum.