Today's post is fascinating - an Ocean Spray Cranberry Sauce Ad. Most people are not strangers to cranberry sauce, especially as it makes its appearance around the holidays. There are lots of tasty recipes using leftover cranberry sauce too. But what most people don't know, is that cranberry sauce in its infamous "log form" that we all know and love, didn't debut until the eve of WWII in 1941! There's a fascinating article about the man who revolutionized the cranberry growing industry. You can read the article on the Smithsonian Magazine website here. (By K. Annabelle Smith, SMITHSONIAN.COM, NOVEMBER 27, 2013)


I love a lot about this ad. For instance, it tells you how to use the cranberry sauce: "Serve slices of Cranberry Sauce (as you would a vegetable) with any meat..." haha! I guess if it's in such a strange form (like a log!), you'd need to know what the heck to do with it.

And that if you're too busy to cook, you may be doing war work of some kind... (notice the 3 ladies, all in uniform!) 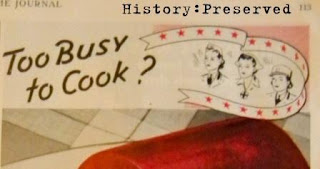 I also love the text in the small boxes about saving tin: "'Save tin,' says Uncle Sam, so we're replacing this can with glass jar below." and "New victory glass container, with many reuses. Same contents as can." Not only were they emphasizing their part in the war effort by saving tin, but they're encouraging you to reuse the jar. Cool!

This is also one of those products that was pre-sweetened, so by using it, you would have saved on your sugar ration. 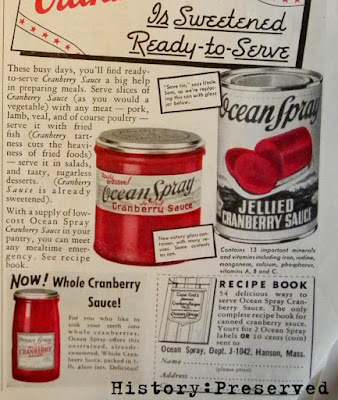